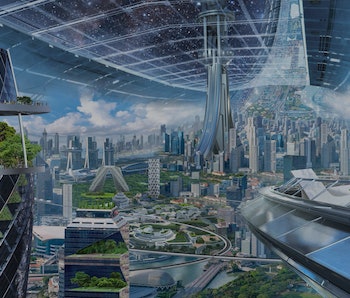 Most of us will get lost from time to time. But, nevertheless, our brains are actually pretty amazing at navigating. Even when you zone out on your daily commute, your brain is still able to get you there safely. This is thanks in part to your place cells.

Place cells are brain cells that respond to a particular location in the environment and become active when you are in that location. Researchers discovered them by putting rats in a square chamber and watching them run around. They monitored when and where the rats’ place cells were active. By doing this, they could determine what location each place cell was responding to, called the cell’s “place field.” These place fields are usually circles of 15-25 inches in diameter for rats and mice.

These experiments taught us a lot about how place cells work, but they are not a great representation of the real world. A barren, square, white box is an unlikely environment for a rat, let alone a human, to encounter in the wild. How do your place cells represent locations in a real-life 3D world?

Roddy M. Grieves, a neuroscientist at University College London, has designed a new rat navigation experiment to answer this question. He built a cubic lattice, a 3D grid that the rats could climb in any direction they pleased. They couldn’t just move along the floor, but also vertically up and down.

The researchers discovered that place cells in rats roughly followed the second hypothesis: their place fields took the shape of elongated spheres, like rugby balls. The elongation was always along one of the three directions the rat could run in the wire frame lattice. Generally speaking, the place fields were more stretched in the vertical direction than they were horizontally. This is important, because it means that the cells are less accurate in this direction. In other words, the place cells were less precise in knowing how far up the rat was in space than where it was within the lattice on the ground.

This may be because rats are more inclined to move horizontally than vertically. Of course they can climb, but they tend to spend most of their time walking along the floor. Their place cells may just not be optimized for vertical movement. Another reason the place cells may be worse in the vertical direction is that it is physically harder for the rats to run in this direction. This makes it more difficult for them to gauge how far they’ve traveled.

"Even if we fly a plane or drive a submarine, we are often still moving parallel to the ground. But this might not always be the case.

This research may give us an insight into how the human brain performs navigation, because the human hippocampus, which is critical to navigation, is similar to that of rats. And like rats, we are mammals who generally navigate predominantly in a 2D environment. However, our environment is becoming more and more 3D, with tall buildings, bridges, and underground structures.

These findings in rats suggest that our brains are mainly tuned to the direction we’re used to navigating: parallel to the ground. Since most of our world is laid out flat in front of us, like the floors in buildings, this makes sense. Even if we fly a plane or drive a submarine, we are often still moving parallel to the ground. But this might not always be the case.

One possible future scenario where humans would be truly navigating in 3D would be in outer space. Without gravity there would not be a single direction that would be relatively easier or harder to move along, such as the vertical axes for the rats. As of now, we don’t know what our place cells might do in such a situation and, more importantly, whether we would be able to navigate around as efficiently as we do in our 2D world.

Both on Earth and in space, the design of the environment ultimately has a big impact on our ability to navigate. We are better able to navigate if there are plenty of landmarks around to tell us where we are. We can orient ourselves more easily if a space is not symmetrical. We also navigate better through an environment if we have experienced it from different angles.

Knowing how we find our way around, especially in complex environments, has major implications for the fields of architecture and urban design. It should also be taken into account by engineers and anyone who designs the spaces around us. The goal of research into navigation is not just to understand how our brain works, but also to use this information to make the world around us more suitable for navigation.

This collaboration between neuroscience and urban design is combined in the burgeoning idea of “conscious cities”: environments built to take the needs and behaviors of humans into account. As our cities are getting larger and more complex, neuroscience research will become increasingly important in guiding their design.

More like this
Science
18 hours ago
The Plague Is Still Here — And It Could Infect Your Cat
By Tara Yarlagadda
Science
Feb. 1, 2023
Look! Five New Snake Species Discovered in a Habitat Devastated by Mining
By Robin Bea
Science
Jan. 29, 2023
Are coyotes dangerous to dogs and cats? Here’s how to keep your pets safe
By Tara Yarlagadda
LEARN SOMETHING NEW EVERY DAY.
Related Tags
Share: