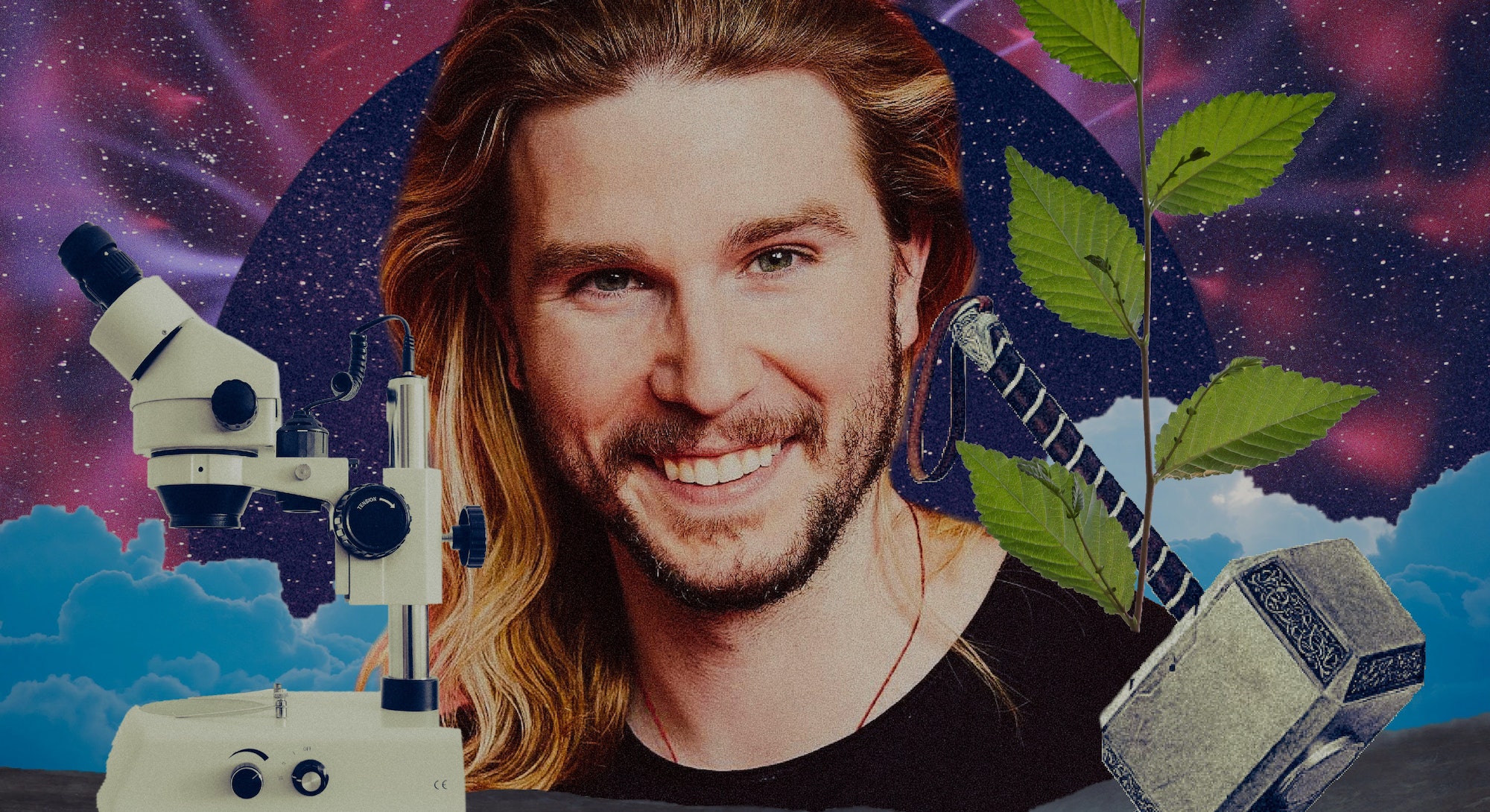 How do White Walkers shatter swords? Could a lightsaber cut through Captain America’s shield? How does the Ghostbusters proton pack work? These are the questions that Kyle Hill answers on his YouTube series, Because Science, in the name of both pop culture nerdery and STEM education.

Hill launched his accessible, brainy, surprisingly addicting series in 2014 as the science editor at the website Nerdist with a video about Godzilla’s biology. Five years on, Because Science claims more than a million subscribers.

Hill discovered that knack for dissecting the science within popular movies and TV shows in 2013 when he published this blog post in Scientific American about the 2005 Joss Whedon sci-fi movie Serenity. The piece used NASA data to analyze a moment near the end of Serenity, the big-screen follow-up to the TV series Firefly. Hill was already a published science writer, but the Serenity analysis “got such a response that I’d never seen before for my writing,” Hill says.

Hill was already a published science writer, but the Serenity analysis “got such a response that I’d never seen before for my writing,” Hill says.

Among the responses was this tweet from Firefly star Nathan Fillion, declaring Hill’s piece “my favorite Firefly fanboy rant to date.”

“As a 22-year-old in Wisconsin writing about nerdy stuff, I freaked out,” Hill recalls. “I was in a coffee shop, and I saw [the tweet], and I just ran up to a barista, and I was like, ‘Do you know this person? This happened to me.’ I didn’t even know who to tell. But from that point, I decided, I’m going to make that my niche — science and pop culture, the analysis of it, while trying to learn something.”

When I meet up with Hill at a cafe in Burbank, our conversation starts with the topic all of Southern California is buzzing about: the prior day’s 6.4-magnitude earthquake, which had an epicenter at Ridgefield, California. (Little did we know then that a second, larger temblor would shake the area a few hours later.) Hill seems a bit spooked by the Independence Day quake, noting that it’s by far the largest earthquake he’s experienced in his five years living in Los Angeles.

His roots are in the Midwest — he was born in Mequon, Wisconsin, and earned two degrees from Marquette University — but Hill says he relishes living in Los Angeles because of the opportunities afforded by proximity to the entertainment industry. He’s most animated when he speaks to me about his upcoming gig moderating the San Diego Comic-Con panel for his favorite sci-fi series, The Expanse — and about the show’s scientific accuracy. He’s called it “the best example of how science can be both respected and narratively interesting in years.”

Hill’s interview for Inverse at that Burbank cafe, called Republic of Pie, turns out to bring his career full circle. He filmed the Al Jazeera English program TechKnow at Republic of Pie shortly after moving to LA. Meeting Fillion’s then-girlfriend on set then led to an invite to the actor’s birthday party. “I met the founder of Nerdist there, elevator-pitched him, got hired there, started doing videos on pop culture and stuff,” Hill recalls. (Yes, real life can be a La La Land song sometimes.)

Before joining the Nerdist staff, much of Hill’s writing was in the genre of organized skepticism. He wrote pieces that disproved the existence of ghosts and challenged the effectiveness of acupuncture.

“I transitioned out of that because of how much it got in people’s faces and made people mad,” Hill says.

He steers mostly clear of politicized, controversial issues on Because Science. (The show contains an off-hand allusion to climate change now and then, but you won’t find a whole episode devoted to global warming, for example.) Hill finds other venues for speaking up on hot-button science topics, like at the March for Science Los Angeles, which he has MC’ed twice.

“Administrations deleting [data] or hamstringing NASA or things like that — it’s just actively harmful to human knowledge. You don’t have to get in everyone’s face about everything,” Hill explains, “but there are certain areas where I feel like you are almost morally obligated to say something.”

The curriculum of Hill’s master’s degree in science communication was primarily focused on written communication, so Hill supplemented that education with his own study of public speaking on science. He watched Bill Nye the Science Guy, Alton Brown’s Good Eats, and Carl Sagan’s Cosmos: A Personal Voyage, taking notes on the hosts’ sentence structure, pacing, and tone.

“I feel like a lot of scientists, a lot of technology/STEM people, for whatever reason, do not view the communication aspect of science communication as valuable as the science part,” Hill says. “I view the communication as just as integral as the actual science that you’re saying. You can talk to a Nobel laureate — the smartest people in the world — sometimes those conversations are pretty rough. It’s because they spend most of their time researching — which is fine. But if you haven’t practiced good communication, you’re not going to be good at it.”

On Because Science, Hill speaks at a brisk pace, with eagerness and a steady intensity. His weekly 15-minute video takes approximately three hours to shoot — an energetic delivery throughout that taping is something he has to amp himself up for, which he admits isn’t his natural state.

“You don’t get it from my videos, but I am extremely introverted,” Hill says. “Choosing the kind of career path that I did for the last couple years, I’ve gotten really good at coming up with coping mechanisms for that. I knew that if I was going to be performing in any way, I gotta up the energy a little bit. It was deliberate to go from being in first gear most of the time, but when you film, you’re going into second and third gear.”

Hill does enjoy performing, though, and he’s considered taking on some acting work, particularly voice acting. But he knows that he’s carved out a niche where he’s competing against perhaps only a couple dozen science communicators who do similar work professionally full-time — a much smaller number than if he were to enter the pool of aspiring and working actors.

“I’m competing against 24 versus 24,000 or 2.4 million people,” Hill points out. “The chances of making it — even if someone’s like, ‘We need a skinny Thor-looking dude for something’ — and making a good living go down dramatically. So I’m kind of sticking to my guns.”

Hill notes that “the way I look, the way I act” — those comparisons to the Asgardian Avenger — have led to incorrect assumptions about his role on Because Science.

“You’re just an actor, right?” “You’re just reading someone else’s script, right?” People have said these things to Hill, “and that hurts,” he says.

Hill’s involved in much of the preparation for Because Science. The show (and its spinoffs) comprise his full-time job. He researches, does calculations for, and scripts every episode, then shoots the show in collaboration with a producer and a camera operator. He also edits the show, along with editor and motion graphics artist Charles Shattuck.

His research often means first turning to Wikipedia as a jumping-off point. (“Your teachers lied to you when they said Wikipedia isn’t a good resource. That’s not true. It’s a great resource,” Hill insists. “It’s the Library of Alexandria of our era.”) He also consults with experts, such as evolutionary biomechanist Dr. John R. Hutchinson, when he answered the question, “How would you fight a T. rex?” and quantum physicist Spiros Michalakis, whom Hill spoke with at length to ready himself to explain the timey-wimey elements of Avengers: Endgame.

"It’s the Library of Alexandria of our era.

And, yes, Hill will even cite academic papers to provide evidence for his conclusion to the important questions, like, could Ant-Man defeat Thanos by flying into his butt?

Throughout his interview, it’s clear that Hill is cognizant he hasn’t faced many of the challenges that women have in STEM fields. He observes that, oftentimes, “people actively discourage them, or young women feel like it’s not their place, like it’s a boys’ club,” Hill says.

When he’s spoken with grade school students in underprivileged communities, he’s told them, “Look, I am not the picture of diversity. I do not have your life experience. I was born into a fine middle-class life and never had it very rough, and I’m a straight white guy. That being said, I’m here today to tell you that anyone can be a scientist.”

Because Science’s audience is primarily men age 18 to 34. Hill says he’s still assessing “how to get a wider audience, especially young women and girls who need to have more support in this space.”

As part of the effort to reach that audience, and to spotlight people underrepresented in STEM fields, Hill expanded the Because Science brand earlier this year, launching a show called Because Space, hosted by Dr. Moogega Stricker (aka Dr. Moo), a planetary projection engineer for NASA.

Hill hopes to later launch other spinoffs on the channel — perhaps Because Biology or Because Entomology.

In his role as shepherd of the Because Science brand and as a science educator, Hill says, “I’m doing basically the exact thing that I think I should be doing. I’m not a spiritual person, but if people have a purpose, this feels kind of like mine.”

Hill watched Bill Nye the Science Guy and the Martin Sheen-hosted Eyewitness while growing up, but he says the most influential series was MythBusters. Since watching the show as a teen, he’s gained a mentor in co-host Adam Savage. Hill served as the host for 2017 competition series MythBusters: The Search.

“I’ve been incredibly fortunate to grow up with people like [the MythBusters cast] and then find out that they’re nice people who still care about what they do,” Hill says. “That was a big thing for me. It was them. And I’ve gotten to tell them that.”

Here’s one piece of advice from Hill: “If someone really affects your life in a positive way, if you can, tell them, before you can’t,” he says. “I’ve been fortunate to have great teachers at every level, people who’ve really inspired me. Mr. D — Mr. Duginski back in Wisconsin in eighth grade — was fantastic, and by the time I realized how much of an impact he probably had on me, he had passed from cancer as a young guy.”

Hill now knows what it’s like to be on the receiving end of that kind of thank you. A Because Science viewer sent him this message via email last month:

I just got out of prison after serving seven and a half years. I saw your show on TV while I was in there, and it inspired me more than one might think. Anyway, I’m now getting ready to go to school for computer science and will likely pursue a master’s or more, and that’s literally because of you. Without piquing my interest, I’d still be some lost 25-year-old kid who grew up in a prison with no creative outlets. So thank you very much, and I hope one day I’ll get to tell you that in person.

That email was an early fulfillment of aspirations for his work. He tells me he hopes that “10 years from now, a kid comes up to me and says, ‘Oh my God, I became an engineer, I went into physics, I became a doctor, I became XYZ because of that thing that you did.’ And that will make any burnout, any discomfort that I feel now or day to day — that’ll be totally worth it.”