“Climate change is a hoax" 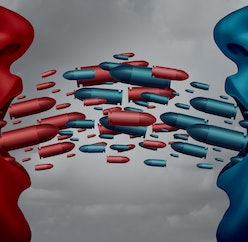 “Climate change is a hoax,” my cousin said during a family birthday party. “I saw on Twitter it’s just a way to get people to buy expensive electric cars.” I sighed while thinking, “How can he be so misinformed?” Indeed, what I wanted to say was, “Good grief, social media lies are all you read.”

No doubt my cousin thought the same of me when I said Republican senators are too afraid of the president to do what’s right. Not wanting to create a scene, we let each other’s statements slide by in icy silence.

As a psychology professor and clinical psychologist in private practice, I know my relationship with my cousin would have improved if we could have discussed those issues in a nonthreatening way. If only.

I’m not alone in my frustration – and my desire for change. A December 2019 poll conducted by Public Agenda/USA TODAY/Ipsos showed more than nine out of 10 Americans said it’s time to reduce divisiveness, which they believe is exacerbated by government leaders and social media. People want to stop the animosity and relate to one another again. But how?

Based on my knowledge of psychological research, here are four approaches you can use to overcome divisiveness.

Avoiding interactions with people who have different opinions perpetuates divisiveness. Risk connecting with these people. Relate through activities you enjoy such as volunteering, joining a “Meetup” group or starting a book club. You could even invite people from various backgrounds to a potluck dinner at your home.

What activities like these share are a common goal, which creates a cooperative atmosphere instead of a competitive one. Research demonstrates that contact alone does not ensure cooperative interaction. To truly connect, you both have to demonstrate respect while working on a common goal.

It’s important to remember the basic need to feel secure is shared by all people. Focusing on commonalities can lead to a deeper understanding of another person while focusing on differences will lead to arguments.

An argument involves two people asserting one is right while the other is wrong. But what gets lost in this scenario is the common ground of the problem they both are trying to wrestle with.

Restate the problem. Together, brainstorm all the different ways it might be solved.

For example, a person might say the only way to protect America from terrorism is to sharply limit immigration. Instead of challenging that immigration must be limited, you can restate the problem – then ask if there might be ways to deal with terrorism besides limiting immigration. You might find some solutions you agree upon.

Listen more and talk less. Show the other person you have understood what they said before jumping in with your thoughts.

Everyone wants to be acknowledged as heard. If they are not, they will continue to press their point. So, to stop an argument in its tracks, start listening and reflect back what you’ve heard.

You’ve probably experienced listening for only what you want to hear – and possibly found yourself not listening at all. You may just be waiting to give a knee-jerk reaction to what the other person is saying.

To listen well, you need to first open your ears, eyes and heart. Examine your biases so you can hear without judgment. Suspend your self-interest and stay with what the other person is saying. Then tell that person what you heard.

Showing empathy does not mean you necessarily agree with what the other person is saying. It just means you’re reassuring the other person you have listened to before making your own statement.

Now, it’s time for you to share where you’re coming from. Take a deep breath. Cool down and reassess your thoughts so you can give a considered response, instead of a quick reaction. You can disagree without being disrespectful.

Communication using the above process leads to a conversation instead of an argument and builds a more trusting relationship. It takes only one of you to create an empathetic conversation, as empathy begets empathy. The more compassionate understanding you give, the more you get.

Don’t passively accept all that you see and hear. There are too many sources of distorted facts, unsupported opinions and outright lies available today. Critically evaluate what is being presented by considering the source and fact-checking the content.

Above all, if the message seems fake, don’t share it. Google has a fact-checking tool, and First Draft News has tools to evaluate false content and the way it is disseminated. You can also consult Full Fact and CUNY’s fact-checking guide. So, when you hear or see someone sharing fake information, don’t challenge it. Instead, show how to fact check the information.

Avoid anger and hate in the content you consume. Evaluate whether it is seeking to pit you against another person or group. Follow media that support empathy, compassion and understanding. But don’t get lulled into a bubble by reading only content you agree with. Help children and teens, not only to critically evaluate media but also to become kind and caring toward people who are different from them. Teach tolerance by showing tolerance. Yes, you are only one person trying to create change, but your influence does matter.

As for me, the next time I see my cousin, I plan to listen with empathy; let him know I understand his point of view; and try to identify a common goal around which we can share our perspectives.

This article was originally published on The Conversation by Beverly B. Palmer. Read the original article here.