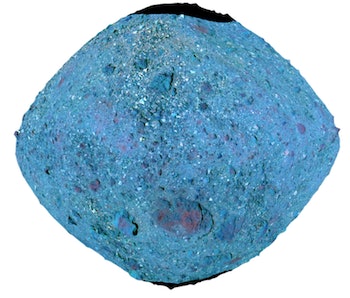 Of all the floating piles of rubble in space, asteroid Bennu is special.

The diamond-shaped asteroid was first discovered in 1999. Now it is the primary target of NASA's first asteroid sample-return mission. The OSIRIS-REx spacecraft is currently orbiting around the ancient asteroid, preparing for its landing on October 20 for the first sample collection attempt.

But before it steals a chunk of Bennu, scientists have created a 3D model of the asteroid's terrain, giving us our clearest picture yet of what we can expect when OSIRIS-REx makes landfall.

In a series of six papers published Thursday in the journals Science and Science Advances, researchers provide new insights about Bennu, and why we study asteroids in the first place.

Michael Daly, an associate professor at York University's department of physics and astronomy and lead author of one of the recent studies released on Bennu, admits that he grew more and more fond of the asteroid the more he learned about it through the mission.

Bennu is a rare, B-type asteroid. Asteroids are divided into different types based on their chemical composition, and B-type denotes the most primitive kind of asteroid — in other words, Bennu has not significantly changed since it formed 4 billion years ago.

Using the OSIRIS-REx Laser Altimeter, which is an instrument composed of a laser and a radar, Daly and his team put together 3D, digital model of Bennu's terrain, with detailed analysis of the asteroid's shape.

The team took almost 3 billion measurements of the asteroid to create the model, collecting 'post-it stamps' pieces of data that were 120 by 120 meters across.

At an unprecedented 20-cm resolution, the model shows the asteroid in fabulous detail and with extreme accuracy.

"We created the underlying dataset, it’s the highest resolution model ever done," Daly says. "It’s a key skeleton that's required even for the other papers to analyze their data."

By identifying all the optical properties of the asteroid, the scientists can take this knowledge and apply it to other asteroids as well, including those we cannot send missions to, according to Daly.

Most of the asteroid's large boulders are located in the south, extending over 20 to 30 meters long.

Additionally, the 3D model revealed ridge-like mounds on Bennu that extend from pole-to-pole. These are indicative of the asteroid changing its rotation rate early on in its history after it absorbed energy from the Sun, according to the study.

Why do we study asteroids?

There are 500,000 known asteroids in the Solar System which periodically orbit the Sun. To select an asteroid for the OSIRIS-REx mission, NASA looked at those closest to Earth, also known as Near-Earth Objects.

There are over 7,000 Near-Earth Objects, but only 192 have a low-eccentricity orbit similar to Earth's. Only 26 of those asteroids had diameters larger than 200 meters, which meant they didn't spin as fast as the smaller ones, causing material to fall off.

Of these 26 asteroids, only five were known to be rich in carbon.

Bennu's chemical composition suggests that it contains carbon material, organic molecules, and amino acids — the building blocks of life. Asteroids formed from the very same material that formed the Solar System, and may contain clues as to how water and other biological material made their way to Earth, and sparked life as we know it.

"We are getting material that we wouldn't have easy access to," Daly says.

Bennu may be our friendly asteroid neighbor, but it is also a potential hazard, coming within a mere 0.002 Astronomical Units to Earth every six years.

Missions like OSIRIS-REx can help scientists better predict the orbital paths of asteroids and how they change over time — including whether they are on a collision course with Earth.

"We know it happened in the past, and it’s likely we’ll be hit in the future," Daly says. "But the question becomes, is the future close enough for you and I to have to worry."