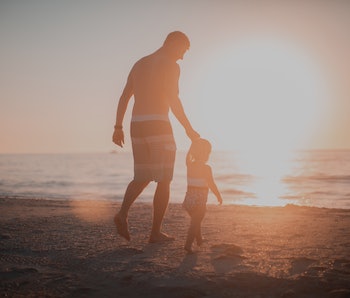 No matter how hard they rebelled in adolescence, adults tend to become a lot like their parents. But according to a new crop of studies exploring the influence of fathers, that might have been inevitable.

Thanks to separate studies conducted at University of North Carolina, Washington State University, and the University of Massachusetts, we now have a more thorough understanding of how and why these influences take shape as we get older.

While some influences are the result of social conditioning, others are plucked from dad’s genetic makeup, wherein his lifestyle choices from before conception may play a part in a child’s expressed DNA. These separate studies have explored the influence of fathers in an array of aspects, creating a multi-layered understanding of what fathers really bring to the table when shaping a person.

Our own diction and personal styles of communicating are usually influenced by how adults spoke to us as children, but research suggests that fathers play a unique role in that conversation. There have been countless studies on the effects of baby talk and the ways in which parents, especially mothers, tend to raise the pitch of their voices when speaking to small children. However, a study from Washington State University found that fathers use significantly less baby talk when speaking to their children, and that isn’t such a bad thing.

Led by Mark VanDam, Ph.D., from the university’s Floyd College of Medicine, researchers placed recording devices on 11 preschoolers to record a day’s worth of sounds directed at children. More than 150 hours of audio was then analyzed with speech recognition software. VanDam found that when mothers spoke to their children, the parent’s pitch increased by 40 hertz. However, when a father spoke to the child, their voices usually maintained the same pitch as when they spoke to adults.

Although prior research has shown that children pay more attention to the high-pitched sounds directed at them, the diversity in how they are addressed could boost their language skills. By talking to their kids the way they talk to adults, dads give children a bridge to stronger language skills and helps them transition into stronger speech patterns later.

Sure, mom and dad each contribute 50 percent of our DNA, but that doesn’t mean all genes are expressed equally. According to a study from the University of North Carolina, mammals use more of the DNA that is inherited from their fathers.

The study, which first appeared in Nature Genetics in 2015, showed how the expression of thousands of different genes in mice varied depending on whether they came from the mother or father. While each parent technically contributed half of an offspring’s genome, approximately 60 percent of the father’s genes were more expressive than the mother’s.

“We discovered a new, genome-wide expression imbalance in favor of the dad in several hundred genes,” James J. Crowley, Ph.D., said of his research, which he co-authored with Fernando Pardo-Manuel de Villena, Ph.D. “This imbalance resulted in offspring whose brain gene expression was significantly more like their father’s.”

Your health and well-being

If we use more of the DNA that we inherit from our dads, that has wide implications for the study of human disease. “We’ve known that there are 95 genes that are subject to this parent-of-origin effect,” said de Villena. “They’re called imprinted genes, and they can play roles in diseases, depending on whether the genetic mutation came from the father or the mother. Now we’ve found that in addition to them, there are thousands of other genes that have a novel parent-of-origin effect.”

If your mother has a predisposition towards a given disease, it can still be inherited, but given that DNA from the father is more likely to be expressed, illnesses and gene mutations inherited from dad could be more likely to appear. When studying hereditary diseases, Crowley and de Villena’s research suggests it can make a difference if the genes that cause a disease come from a specific parent.

It’s not the only way in which dad can affect a child’s well-being. Men who eat poorly when their children are conceived put their baby at higher risk for birth defects, according to a 2015 study from the University of Massachusetts. The research shows that a father’s RNA, which is what expresses one’s genetic code, is altered by his indulgence in an unhealthy diet. If his diet is unhealthy at time of conception, that genetic code is transferred to the child along with a greater sensitivity to health risks.

Looking at both the social conditioning and genetic patterns that are picked up from dads, it’s clear that a father’s influence on their offspring is multidimensional. These studies offer many tools in better understanding — and, in some cases, treating — the conditions we inherit from dad, whether they are celebrated or not.