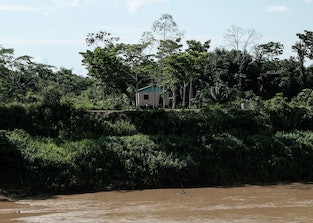 BR-364 is a long, lonely highway, stretching more than 2,000 miles from Brazil’s southeastern states to its western border and cutting through vast green swaths of forest and bushland.

The two-lane highway also passes through some of the most ecologically pristine areas in the world.

This remote area is one of the last places where “ecological intactness” remains. Scientists want to study this region to help reverse the global biodiversity crisis, according to a stunning new dataset that shows the last few places on Earth where life largely remains the same as it was 600 years ago.

What’s new — A study published Thursday in the journal Frontiers in Forests and Global Change paints a grim picture of habitat loss. But it also offers a few key places where we can protect planet Earth’s future — and our own.

Some 97 percent of Earth is no longer ecologically intact, according to the study.

But what, exactly, does it mean for land to be “ecologically intact?”

Lead author Andrew J. Plumptre, who serves as the head of the Key Biodiversity Areas Secretariat in Cambridge, tells Inverse that there are actually three kinds of intactness, according to their research:

Behind the scenes — Most previous research on habitat intactness has focused on aerial footage, surveying desolate forests from high up in the air. These studies estimated that 20 to 40 percent of the Earth’s habitat was intact.

However, those studies weren’t exactly providing the full scope of the crisis — the lack of ecological intactness — that was truly unfolding on the ground, says Plumptre.

Plumptre was inspired by his own scientific background to take a different approach to truly understand where habitat loss was most affecting species.

“Working in the tropics for 30 years and undertaking surveys of many African forests, what can look intact from the air can be devoid of species when you look under the canopy,” Plumptre says.

He adds, “This was what motivated me to compile existing data on where we know where animals have been lost.”

How they came to this number — Using aerial footage and data from a previously established human footprint map, the scientists determined habitat intactness.

The scientists then studied different kinds of animals — and various situations that led to their local extinction — to determine faunal intactness. These animals ranged from Western lowland gorillas to American black bears.

Finally, the researchers further refined their data to come up with functional or ecological intactness for the entire globe.

What’s the problem — Using these frameworks, the researchers found that only 2 to 3 percent of landmass is ecologically intact — a shockingly low number.

“What this basically means is that only 2 to 3 percent of the land surface of the world can be considered to look like it did 500 years ago in terms of both intact habitat as well as intact fauna,” Plumptre says.

Even more striking, only 11 percent of this landmass fell within currently protected conservation areas. Even fewer fell within recognized Key Biodiversity Areas, which are key areas on the planet vital to preserving animal life and habitation.

Why this finding matters — The researchers ultimately concluded that “few areas of the world remain that can be characterized as having outstanding ecological integrity.”

In the hands of another researcher, these sobering findings might lead to doomsday prophecies, but Plumptre is determined to seek out productive solutions to save the planet.

His team ambitiously proposes that “up to 20 percent of the earth’s land surface could be restored to faunal intactness through the reintroduction of up to five species.”

They identified a few key biodiversity areas where we could restore ecological intactness, specifically in areas where humans have a low ecological footprint:

We should focus on a few key areas where restoring the environment and local species is most viable, and the entire planet will ultimately benefit.

What’s next for the scientists — The study focuses on policy and research solutions for conservation stakeholders who can shape environmental standards.

Plumptre says that the next step is for stakeholders to compile better data on human impact and living animal species in local habitats with major ecosystems, also known as “ecoregions.”

With this data in hand, scientists can then identify ecologically intact areas, which could then become officially designated key biodiversity areas, leading to better habitat protection.

Plumptre also calls for broader support of indigenous peoples, who often live in ecologically intact areas and could be key partners in restoration efforts.

WHAT YOU CAN DO — Individuals like you or me can make a difference when it comes to protecting biodiversity and local habitats.

But the biggest thing we can do is to be mindful of our impact on the planet when it comes to big life decisions — such as purchasing a home.

“Don’t build homes and roads into remaining wilderness areas. Even if the site no longer contains all the species, our study showed that the opportunities for restoring faunal integrity are there — if the intact habitat is conserved,” Plumptre says.

Even if a highway cuts through a remote area, that doesn’t mean the biodiversity has been destroyed. Animals and humans can coexist in these areas, just as BR-364 shows, but striking a balance requires more scientific collaboration and policies that can prevent 97 percent from becoming 100 percent.

Abstract: Conservation efforts should target the few remaining areas of the world that represent outstanding examples of ecological integrity and aim to restore ecological integrity to a much broader area of the world with intact habitat and minimal species loss while this is still possible. There have been many assessments of ‘intactness’ in recent years but most of these use measures of anthropogenic impact at a site, rather than faunal intactness or ecological integrity. This paper makes the first assessment of faunal intactness for the global terrestrial land surface and assesses how many ecoregions have sites that could qualify as Key Biodiversity Areas (KBAs - sites contributing significantly to the global persistence of biodiversity) based on their outstanding ecological integrity (under KBA Criterion C). Three datasets are combined on species loss at sites to create a new spatially explicit map of numbers of species extirpated. Based on this map it is estimated that no more than 2.9% of the land surface can be considered to be faunally intact. Additionally, using habitat/density distribution data for 15 large mammals we also make an initial assessment of areas where mammal densities are reduced, showing a further decrease in surface area to 2.8% of the land surface that could be considered functionally intact. Only 11% of the functionally intact areas that were identified are included within existing protected areas, and only 4% within existing KBAs triggered by other criteria. Our findings show that the number of ecoregions that could qualify as Criterion C KBAs could potentially increase land area up to 20% if their faunal composition was restored with the reintroduction of 1-5 species. Hence, if all necessary requirements are met in order to reintroduce species and regain faunal integrity, this will increase ecological integrity across much of the area where human impacts are low (human footprint ≤4). Focusing restoration efforts in these areas could significantly increase the area of the planet with full ecological integrity.