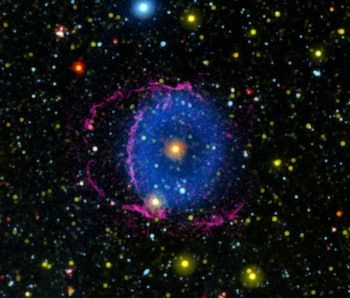 The Blue Ring Nebula has puzzled scientists for the past 16 years. Discovered in 2004, the colorful nebula has defied scientists attempts to piece together its origin story.

But a team of astronomers may have finally cracked the case. In a new study, they suggest this large, blue blob of gas with a star at its center is actually the debris left over from the merger of two stars which occurred thousands of years ago.

Their findings are detailed in a study published Wednesday in the journal Nature.

The Blue Ring Nebula was first spotted in 2004 by NASA's space telescope, the Galaxy Evolution Explorer (GALEX). The Nebula was nothing like anything scientists had seen before — appearing as a large blob of gas with a star in the middle. While it looks blue in scientists' images of the nebula, in truth it doesn't actually emit color that can be seen by the human eye. Rather, its invisible, ultraviolet light was color-coded blue by the telescope images.

The Blue Ring Nebula is the same size as the faint remanent of a supernova explosion — the aftermath of a large star running out of fuel and going out in an explosive death. But this nebula has a living star at its center. And so began the hunt for the truth behind this strange object.

A history of violence — In 2006, scientists observed the nebula using two powerful telescopes: the Hale telescope at the Palomar Observatory in San Diego County, California, and the W.M. Keck Observatory in Hawaii. In their observationd, they found telling evidence of a shockwave around the nebula, indicating that some sort of violent event had taken place there, expelling the gas of the nebula out into space.

"For quite a long time we thought that maybe there was a planet several times the mass of Jupiter being torn apart by the star, and that was throwing all that gas out of the system," Mark Seibert, an astrophysicist at the Carnegie Institution for Science and a member of the GALEX team, said in a statement.

The mystery endured. In 2012, the same team of scientists identified a disk of dust orbiting closely around the star. The size of the disk suggested it came from an object much larger than a planet — ruling out the scientists' previous hypothesis.

The evidence began to build. The team collected data from four space telescopes, four ground-based telescopes, and historical observations of the star going back to 1895. Armed with this massive trove of information, they dived back in, determined to solve the mystery once and for all.

Their forensic approach appears to have borne fruit. Hidden in the data, they discovered evidence to suggest the Blue Ring Nebula is actually the result of the merger between two stars, one around the same size as our Sun and another about one-tenth of that size.

How did it happen? — Thousands of years ago, near the end of its lifecycle, the star similar in size to the Sun began to swell. As it did so, it inched closer to a smaller, nearby star. Due to the gravitational tug of the large star, the smaller star fell into a downward spiral toward the larger companion.

Over time, the larger star began tearing its smaller peer apart and wrapped itself up in a ring of debris before swallowing the smaller star entirely.

Their merger set off a cloud of hot debris, emitted into space and sliced in half by the disk of gas in the middle. As a result, two cone-shaped clouds of debris were formed, moving in opposite directions, with one cone traveling towards Earth and the other directly away from our planet. Although the individual cones are too faint to spot on their own, the area where they overlap is what forms the shape of the Blue Ring Nebula.

"We see plenty of two-star systems that might merge some day, and we think we've identified stars that merged maybe millions of years ago. But we have almost no data on what happens in between," Brian Metzger, an associate professor of astronomy at Columbia University, and co-author of the study, said in a statement.

"We think there are probably plenty of young remnants of stellar mergers in our galaxy, and the Blue Ring Nebula might show us what they look like so we can identify more of them."

Abstract: Stellar mergers are a brief but common phase in the evolution of binary star systems1,2. These events have many astrophysical implications; for example, they may lead to the creation of atypical stars (such as magnetic stars3, blue stragglers4 and rapid rotators5), they play an important part in our interpretation of stellar populations6 and they represent formation channels of compact-object mergers7. Although a handful of stellar mergers have been observed directly8,9, the central remnants of these events were shrouded by an opaque shell of dust and molecules10, making it impossible to observe their final state (for example, as a single merged star or a tighter, surviving binary11). Here we report observations of an unusual, ring-shaped ultraviolet (‘blue’) nebula and the star at its centre, TYC 2597-735-1. The nebula has two opposing fronts, suggesting a bipolar outflow of material from TYC 2597-735-1. The spectrum of TYC 2597-735-1 and its proximity to the Galactic plane suggest that it is an old star, yet it has abnormally low surface gravity and a detectable long-term luminosity decay, which is uncharacteristic for its evolutionary stage. TYC 2597-735-1 also exhibits Hα emission, radial-velocity variations, enhanced ultraviolet radiation and excess infrared emission—signatures of dusty circumstellar disks12, stellar activity13 and accretion14. Combined with stellar evolution models, the observations suggest that TYC 2597-735-1 merged with a lower-mass companion several thousand years ago. TYC 2597-735-1 provides a look at an unobstructed stellar merger at an evolutionary stage between its dynamic onset and the theorized final equilibrium state, enabling the direct study of the merging process.

More like this
Science
8.12.2022 12:30 PM
Astronomers pinpoint the source of a mysterious cosmic particle
By Kiona Smith
Science
10 hours ago
Youngest exoplanet ever found could settle a massive astronomical debate
By Joseph Malcomson
Science
10 hours ago
Look! Black hole pair glows at the center of a dusty galactic merger
By Jennifer Walter
Related Tags
Share: