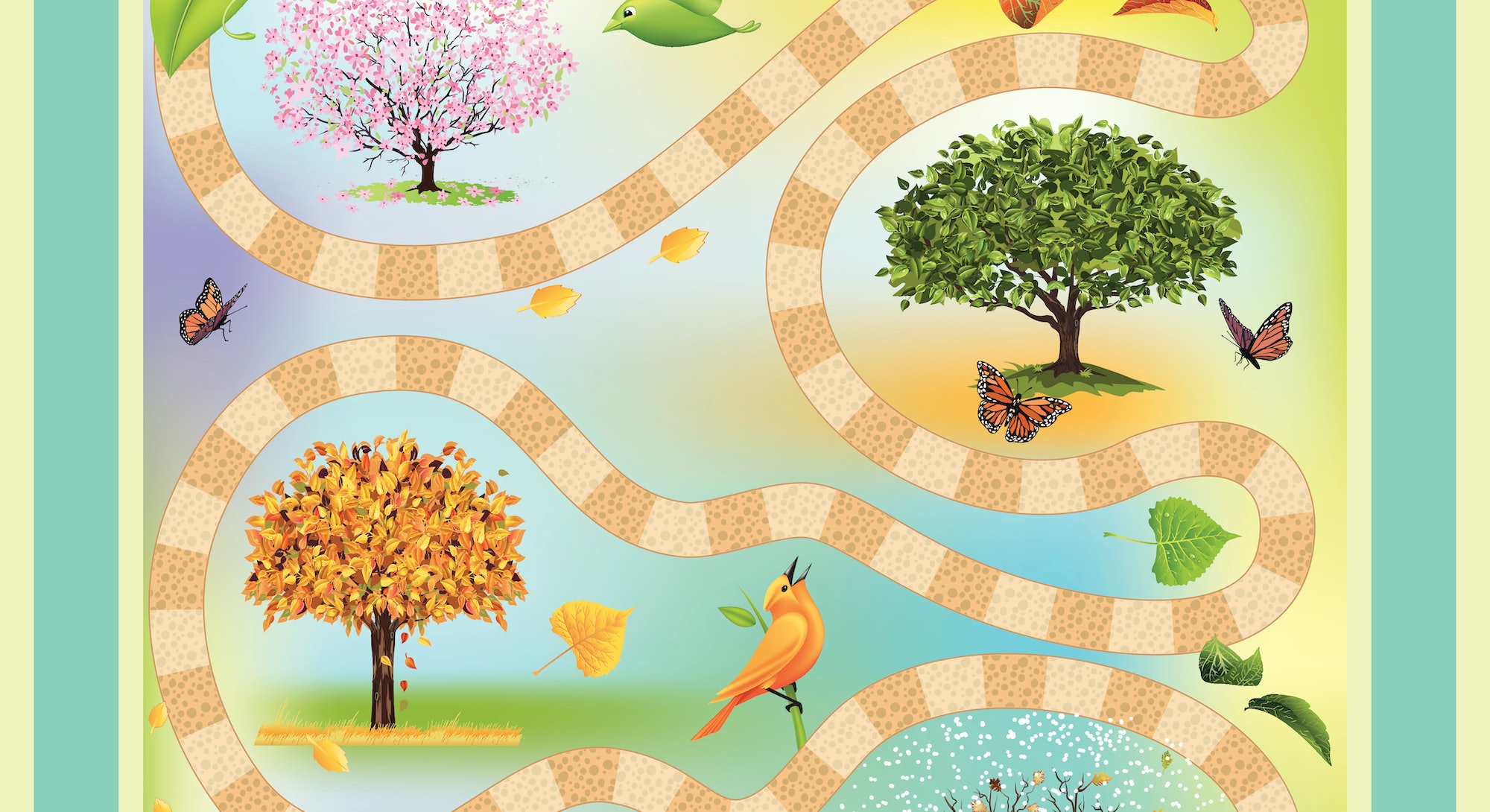 It’s no secret that board games have a sustainability problem. We’re not talking about increasing competition from video games or social media, but actual sustainability.

Some of our favorite board games, ranging from Catan (previously known as The Settlers of Catan) to Risk, are designed around extracting resources from the Earth, through any means necessary. A hundred years from now, the themes of these games could present a cruel irony if they’re still being played in a resource-strapped world.

But a wave of new games is pushing forward ideas about the objective of board games while still keeping them fun. In doing so, they are signaling that the future of Earth need not be a roll of the dice.

Welcome to FUTURE EARTH, where Inverse forecasts 100 years of possibilities, challenges, and who will lead the way.

What’s the biggest problem with board games?

“It's expected that board games have soaked up some of the colonial attitudes from the cultures and people that create them,” John Brieger, a design researcher who runs the Brieger Creative studio, tells Inverse.

Many board games — typically known as “Eurogames” — prioritize resource extraction for the player’s gain, which directly mirrors colonial powers that sought to conquer lands and people for economic gain and world domination. Examples of these games are Carcassonne, Puerto Rico, and Catan.

“In The Settlers of Catan, set on a newly colonized island, hexagons represent different kinds of terrain. But these different landscapes are in the gameworld nothing more than raw materials waiting to be extracted,” Alf Seegert, designer of the board game Haven and a professor at the University of Utah, tells Inverse.

In these games, “nature has historically been viewed as vast, enduring and wild, something to be tamed, harnessed, or harvested,” Matt Montrose, designer of card game Ecologies, tells Inverse.

In other words, nature isn’t really like nature. It’s extracted, much like in the real world, but that extraction comes with no risk to the world.

The future of eco-friendly board games

But in recent years, some designers have begun charting a different course — away from colonialism and economic games, and toward issues like climate change and the biodiversity crisis.

These newer games either channel explicit anti-colonial themes or provide gameplay mechanics that focus on building up ecosystems and protecting the environment — not plundering it for world domination.

“I believe you are seeing a shift in board games to more themes related to nurturing and safeguarding nature and natural processes,” Montrose says.

Board game designer Calvin Wong Tze Loon 黃子倫 (you might recognize him from the movie Crazy Rich Asians) tells Inverse innovative game designers like R. Eric Reuss and Elizabeth Hargrave helped shift the focus of board games away from conquest-based war games to more collaborative games. In turn, they’re changing the industry.

“I think these games definitely help broaden the scope for what games can be about and expand the core verbs that players engage in, grow, cooperate, help, rather than games only using destroy, compete, attack,” Wong says.

Seegert agrees. “I'd like to see more and more games that challenge the ‘us vs. them’ mentality of colonialism in favor of genuinely ecological games that promote relationality and mutual aid,” he says.

Here are the 12 best board games with an eco-friendly message available now.

In Spirit Island, your goal is to defend your island home from the colonial invaders that seek to conquer it.

You play as different spirits of the island, fighting back as invaders pillage their way across your island home. You must destroy these invading settlements to win the game.

“I've mostly seen two problems with colonialism in board games: it's been pervasive, an over-common theme; and it's been uncritical, portraying colonialism as broadly positive while ignoring or glossing over the immense harm that it caused and still continues to cause.”

“Spirit Island calls attention to these issues in a blunt fashion by reversing the overused theme, presenting colonizers as an enemy to be fought,” he adds.

You can buy Spirit Island on the website of its publisher Greater than Games, Amazon, and Steam (Steam is a computer-only version).

Any ecosystem requires a number of organisms, from slimy fungus to deadly predators, to keep it alive. In Ecologies, you draw cards to build food webs for different biomes — habitats with unique animals and plants — ranging from swamps to cities. You have to build the food web from the ground up — literally.

But watch out: your healthy ecosystem can suddenly topple if another player decides to sabotage your biome.

Game designer Matt Montrose, the founder of Montrose Biology, took inspiration from his work as a biology teacher to flesh out the game’s mechanics and make these scientific concepts relatable.

“As a biology teacher, my number one goal is to have students realize through hands-on strategic games that biodiversity is crucial — and that large, complex ecologies are more resilient and healthy than atrophied and fragile ones,” says Ecologies game designer Matt Montrose.

You can buy Ecologies on the Montrose Biology Etsy shop, The Gamecrafter, and Oxford Games.

If you’re a birder — or always wanted to be a birder but never found the time — then Wingspan is the perfect game for you.

As a player, your goal is to attract the best birds to your wildlife preserves, but that’s easier said than done. You have to lay eggs and gain food tokens to attract the hundreds of birds available in the game, each of which adds a unique element to your habitat.

After four rounds, the player with the most points sweeps the game. Designed by Elizabeth Hargrave, Wingspan has received countless awards and is a fan-favorite among tabletop gamers.

You can buy Wingspan on the website of its publisher, Stonemaier Games, Geek Game Shop, and Amazon.

Every year, millions of butterflies migrate between the US and Mexico. This stunning real-world phenomenon shapes the gameplay in Mariposas, which means “butterflies” in Spanish.

In Mariposas, the butterflies make three trips by migrating north in the spring, venturing farther out in the summer, and heading back south in the fall. After each round, you tally up your points. The player with the most points — considered the most “successful” butterfly family — wins.

Also designed by Elizabeth Hargrave, the game also takes on added significance with the rapid decline of the monarch butterfly due to habitat loss and climate change.

You can buy Mariposas on the website of its publisher, Alder Entertainment Group, the Geek Game shop, or on Amazon.

Coyote & Crow is a fantasy role-playing tabletop game with a twist: it occurs in a world where Europeans never colonized the Americas.

700 years ago, Earth entered into deep winter, leading to wars and famine. But tribes of people across the continent eventually adapted, and advanced civilizations developed. Now, as the ice sheets are finally retreating, bustling metropolises thrive in North America.

But what mysteries and dangers lie beyond the borders of your home? Who can you trust, now that the old tribal alliances have faded away? That’s for you to find out when you play the game.

A team of Native American designers and creators from 12 different tribes, led by Connor Alexander, is bringing the game to life.

It has currently raised more than $1 million on Kickstarter. You can pre-order Coyote & Crow on Kickstarter today and receive a digital or print copy of the game when it ships in December.

“In my game Haven, which everyone seems to call ‘Princess Mononoke, the board game,’ players can play either as the Forest defending itself from invasion or as the invading City,” Seegert says.

Both players compete to acquire the lore controlled by certain beings, known as “elementals.” When the lore becomes depleted, the Haven Guardian comes to life. At this point, whoever has the highest points either successfully defends the forest — or invades it — winning the game.

“What matters to me is that the game isn't pro-colonization — it represents the contest as one in which the Forest has its own agency and its own point of view,” Seegert says.

You can buy Haven on the website of its publisher, Red Raven, Amazon or Game Nerdz.

In BEEEEES!, speed is the name of the game. Frantically rolling the dice, you claim hive tiles to assemble the best beehive and claim the title of heir to the Queen Bee.

The designer of BEEEEES! is Marcus Ross, the co-founder of Water Bear games (a tabletop games company) along with Cara Heacock.

Ross tells Inverse that the nature theme of the game came about as “a happy accident,” but says he’s generally inclined to shy away from designing Euro games that focus on trading of resources and land conquests. Instead, he prefers games to have a fun social component.

BEEEEES! uses the traditionally competitive elements of board games to create a fun game about nature, conveying the important role of bees as vital pollinators of our ecosystem.

You can buy BEEEEES! on Amazon, Target, and Moonshot Gamestore.

Photosynthesis may be the greenest strategy game out there — literally and figuratively.

The player can take a tree through its entire life cycle using an action points allowance system to represent photosynthesis. You can earn light points as the plant enters into full bloom, but the shadows of your opponents may slow down your plants’ photosynthesis.

You can buy Photosynthesis on the website of its publisher Blue Orange Games, Target, and Amazon.

Any ecosystem thrives — or dies — based on the delicate balance between the organisms that make it up.

Designed by Matt Simpson, this habitat-building game plays exactly as it sounds. You arrange cards representing different animals, such as bees and bears, in different environments.

Your efforts will be rewarded when you place animals in the habitats that best suit their needs, but you’ll lose points if you focus too much on one organism, leading to monocultures. Biodiversity is the true aim of the game.

You can buy Ecosystem on the website of its publisher, Genius Games or Amazon.

In Evolution: Climate, you adapt species to an ever-changing environment. Acquiring certain traits can protect your species from predators or the harsh elements, but with more than 200,000 ways to adapt your species. iI’s up to you to figure out how to best evolve to survive.

Designed by trio Dominic Crapuchettes, Dmitry Knorre, and Sergey Machin, Evolution: Climate is a stunning standalone game. But you can also take a look at its award-winning predecessor, Evolution, for a game with simpler mechanics.

You can buy Evolution: Climate on the website of its publisher, NorthStar Games, and Amazon.

Another standalone game in the Evolution series, Evolution: Oceans takes the series’ original concept and brings it to the deep blue sea.

Using power cards acquired throughout the game, you’ll explore this unknown world far beneath the surface of the ocean. But you must also adapt to survive the dangers that await, ranging from sharp teeth to tricky tentacles.

You can buy Evolution: Oceans on the website of its publisher, NorthStar Games, and Amazon.

Pollution has spoiled this once-pristine valley, but you can still save this ecosystem from disaster. In Renature, you receive a stack of dominoes representing different animals.

As the animals graze, you must replant the surrounding land. The player with the most plants wins, but you’ll need to consider carefully when and where to plant in order to win.

You can find the game on the website of its English publisher, Capstone Games, Geek Game shop, and Amazon.