“The biggest obstacles are between our ears, what we tell ourselves.” 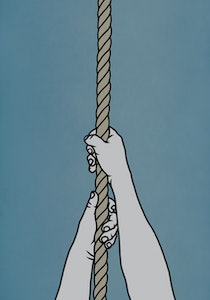 When you feel like you’ve reached your limits and are about to give up, but a sudden burst of energy propels you forward, there's a word for that. Sisu, a Finnish concept that goes back hundreds of years.

“The phenomenon itself is universal,” says Emilia Lahti, a doctoral student at Aalto University and author of a study on sisu. “Taking a close look at the concept reminds us that, as humans, not only are we all vulnerable in the face of adversity, but we share unexplored inner strength that can be accessed in adverse times.”

Multiple qualities make up sisu, including hardiness, determination, and courage. Lahti compares it to a spare tank of gas that kicks in when you think you’re running on fumes. Sisu is related to a more recent concept in the United States called grit, which is defined by author Angela Duckworth as “a combination of passion and perseverance for a singularly important goal.”

According to the BBC, one of the best examples of sisu in action is Veikka Gustafsson, who in 1993 became the first Finn to climb Mount Everest. Sixteen years later, he became the ninth person in the world to climb all 14 of the world’s tallest mountains without the use of extra oxygen.

Most people aren’t climbing mountains in their day-to-day lives, but they may face challenges that push them to their limits. Sisu helps people tap into their previous adverse experiences as fuel.

“Sisu will help us take the next step — or the first one — but the outcome of that action will depend on how we use it,” Lahti says. “In that sense, sisu can be constructive or it can be destructive.”

According to Lahti’s study, “too much sisu can result in burnout, exhaustion, disconnection, and even create an attitude of mercilessness as the individual imposes his or her own harsh standards on others.”

“We need sisu, but we also need things like benevolence, compassion, and honesty with ourselves.”

Another study, funded by the Academy of Finland, VTT, and the University of Helsinki, also found this negative side of sisu.

“It can make people accept overly difficult challenges, demand too much of themselves and their loved ones, or plough stubbornly onwards in the wrong direction,” according to a release summarizing the study.

The researchers tested people’s sisu using questionnaires, laboratory tests, and physiological measurements. In one experiment, they looked at participants’ biosignals and brain activity while performing demanding tasks or dipping their hands in ice water.

“The individuals who reported feeling the most agitated had sweaty hands and heated brain activity during the test, and also scored highly for harmful sisu,” says VTT senior scientist Johanna Närväinen.

So while sisu can help people accomplish amazing things, it needs to be accompanied by other qualities.

“We need sisu, but we also need things like benevolence, compassion, and honesty with ourselves,” Lahti says, who added that sisu is a tool people must learn to master.

So the next time you find yourself facing a great challenge that seems too difficult to overcome, keep the concept of sisu in mind, but also remember that some of our greatest battles are within.

As Gustafsson puts it, “The biggest obstacles are between our ears, what we tell ourselves.”

In the Nordic country of Finland, a cultural construct known as sisu has been used for centuries to describe the enigmatic power that enables individuals to push through unbearable challenges. Sisu, however, lacks a direct translation and the construct has remained poorly defined and understudied. This article seeks to answer the question “What is sisu?” through the thematic analysis of two sets of qualitative data (n = 500 and n = 569) that were collected as part of a survey (N = 1,208) among a sample group of primarily Finnish respondents. The most prominent part of the conceptual core of sisu is the ability to surpass one’s preconceived limitations by accessing stored-up energy reserves. Sisu is invoked by adversity and is more about finding energy in the moment than about long-term endurance, goal-setting and achievement. Instead of being about conscious willing or mental fortitude, it implies a strength that is connected to the visceral and somatic dimension of human endurance. I propose that sisu points to a universal phenomenon of latent energy in the human system, lends it a name and contributes toward a more culturally rich conversation on the human experience of overcoming adversity across life challenges.