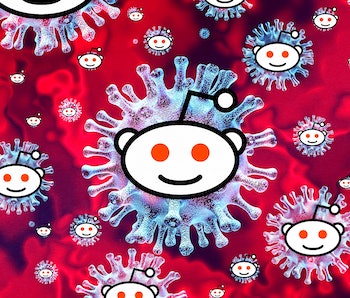 Long before COVID-19, virologist and University of Pittsburgh graduate student Emerson Ailidh Boggs lived and breathed disease outbreaks. So much so that her daily routine was — and is — built entirely around them.

Every morning, Boggs wakes up, goes online, and takes stock of the viral diseases lurking across the world. Then, she travels to her university's lab, where she spends all day studying viruses. And when she gets home, that's when she really gets down to business — Boggs is the moderator of one of the biggest and most active coronavirus forums on the internet.

As of publishing, r/Coronavirus has some one million members. The subreddit is pinned to Reddit's front page, under a banner that reads "KEEP YOURSELF SAFE AND INFORMED." It is now Reddit's fastest growing subreddit, gaining 353,772 members in the past week. On a single day, Friday, March 13, it gained 80,356 members.

Boggs, 25, is just one of a team of 10 moderators that control the flow of information of r/Coronavirus. Boggs has been moderating the subreddit since the beginning of the outbreak, back in December 2019, when there were only 44 cases in Wuhan, China.

"It started off with other virologists just thinking it was a dorky pet project," she tells Inverse.

(The University of Pittsburgh is unaffiliated with Reddit or the subreddit r/Coronavirus and Boggs does not represent the university.)

"It was when the [Reddit] admin actually got involved that other virologists really started taking the subreddit seriously."

They aren't the only people taking the subreddit seriously. r/Coronavirus has become a go-to resource for information about the coronavirus pandemic, which, at the time of publishing, has sickened more than 130,000 people across the globe. Representatives from Reddit itself are in constant contact with the moderation team, another moderator, Patrick Doherty, tells Inverse.

Doherty, 29, has a master's degree in biology from University of Notre Dame and has studied infectious diseases like HIV and tuberculosis. He has also worked on vaccine development in the past.

Doherty, Boggs, and the other moderators of r/Coronavirus are all scientists, former tech workers, nurses, or students. Together, they see curating r/Coronavirus not only as a passion but an obligation.

Doherty for one, feels "duty bound" to do it.

Moderators aren't paid, but as the virus speeds across the world, managing this subreddit is fast becoming a full-time job, squeezed in during the early morning hours or late at night. The mods' goal is to facilitate an online conversation that is serious, but not apocalyptic, grounded in fact, not speculation. As time has gone on, the mods, who have never met offline, have had to become increasingly watchful: there are now thousands of people relying on them.

"I think the growth of the subreddit has been bittersweet," Boggs says.

Everything in moderation — In the United States, COVID-19 has so far forced the closure of schools and led to government recommendations for "social distancing." On Friday March 13, President Trump declared a national emergency, freeing up disaster relief funds and resources to tackle the virus' spread. Meanwhile, many workers are cooped up at home. And amid the stress and the boredom, the temptation to dive head-first into the social media hellscape can be too strong for some.

If you do that, you'll find a heady mix of moving personal anecdotes and bad-faith viral tweets speculating about closures and other emergency measures (one such tweet was debunked by the NYPD yesterday).

Because the disease is both new and spreading rapidly, the need to police misinformation about COVID-19 is obvious. Sites like Facebook, and Instagram have released policies outlining how they plan to wade through the noise.

Paul Barrett, an adjunct professor at New York University who studies online misinformation, tells Inverse that he thinks social media sites are rising to the challenge of dispelling false claims about COVID-19.

"All of the sites have stepped up the degree of their moderation in connection with this crisis," he says. "I think they’ve been more proactive."

These moderators are trained to remove some misinformation and conspiracy theories, like those that may cause active physical harm, a Facebook spokesperson confirmed to Inverse. But for some of the flagged posts, the moderators look to dispel the information they contain, rather than delete them. To do this, Facebook has a team of fact-checkers that look to root out misinformation in posts.

"Being able to moderate and makes me feel like I'm contributing or have a sense of purpose in a situation where otherwise I'm completely out of control."

Unlike Facebook, Reddit leans heavily on user-based moderation teams to keep their communities in check, though they do have to adhere to basic guidelines set by Reddit's leadership. However, human moderation "is not a panacea", Barrett says. But, the human touch has advantages – you've got people like Boggs and Doherty for whom science is both their day job and their passion.

"From what I've read about it, they've got some highly qualified people serving as moderators. That is obviously an advantage over the human moderation done by, for example, Facebook, where human moderators aren't subject-area experts at all," he notes.

Combating misinformation — Human moderators can bring a mixture of expertise and personal stakes that make for a different sort of discussion.

Take the perspective of Rick Barber, another r/Coronavirus moderator, who spoke to Inverse just as President Trump declared a national state of emergency Friday. Like Boggs, he has moderated r/Coronavirus since the early days of the outbreak.

"I was interested in this because I have a lung condition, so I was paying attention to it a lot earlier than a lot of folks," he says.

"I'd seen this subreddit has a pretty high quality source of information, and I wanted to help keep it that way."

A human moderation system is not always perfect. With great power comes great responsibility, and that power can be easily abused. Reddit has already had to "quarantine" two subreddits (Reddit's phrasing) that clearly veered into conspiracy-theory territory. Reddit has not removed the subreddits entirely, but it directs users to a landing page warning that the subreddit "might contain misinformation or hoax content."

In stark opposition to those sanctioned subreddits is r/Coronavirus, where the moderators hold themselves to a higher standard. They were recruited on the basis that they had no tolerance for anything less.

That is how Boggs recruited Doherty, back when the subreddit had just 20,000 members. She noticed him because he wrote a post debunking a conspiracy theory that hinted that the virus might be a bio-weapon, and asked him to join the team.

Since then, they've been working together, directing the flow of information as the news cycle accelerates.

"If it's not verified, maybe it should be on Twitter"

Since then, the moderators have both internalized that sentiment and actively enforced it. Now, they are chastised as "Too concerned with preventing panic," or "Constantly asking for sources, annoying," by frustrated posters.

But if the reaction to Boggs' first post made anything clear, it's that the key to moderating r/Coronavirus is verifying all information.

"Early on, our stance was if it's not verified, maybe it should be on Twitter," he says.

As a senior moderator, Boggs describes her standards for posts as "extremely strict." If she sees a news article that cites a study or expert, she'll do the required clicking to find out what the "expert source" is. Doherty notes that they've now decided to crack down on unverified Twitter videos, too. If you can't tell who made it, where it came from, or if it hasn't been backed up by a trusted source, they won't allow the tweet on r/Coronavirus.

The delicate nature of moderating r/Coronavirus lies in the fact that moderators are constantly weighing the potential for misinformation against the benefit of putting the news out there to spark discussion.

It's a "cost-benefit" analysis to use Doherty's phrase — one that the sub lives and dies by.

That is due in part to the ever-expanding mod team, which now includes people from as far away as Malaysia and Australia.

The team has had several remote meetings, during which they discussed the direction they want the subreddit to take.

"If I had it it my way it would lean more heavily towards the science. But I think we've got a big enough team that we've got a pretty good balance," Boggs says.

"Not all moderators are scientists like Patrick [Doherty] or I are. We have people who are more comfortable moderating things that I wouldn't feel qualified to do."

Take Barber, for example. He's not a virologist, but instead studies how people engage with online platforms. For his part, he can provide a meta-perspective about what goes on the subreddit.

For instance, when the moderators set a rule (like rule number 3: "Avoid off-topic political discussion"), how does that change the overall tone of the subreddit?

"It allows me to think a little about the design of reddit, the design of some of the tools. It's an opinionated design that favors some kind of content," he says.

"Overall, I do think about our guidelines and the design of the community in terms of like: if we adopt this policy, what kind of contributions does it favor or disfavor."

"We try to make choices that favor reliable information," he says.

Hours of conversations and hundreds of moderated posts later, Boggs looks back on that first, angry comment she received very differently. Of all the changes that r/Coronavirus has undergone during these past few weeks, the biggest one has been the criteria for what even counts as news.

"It's been really sobering for me to think back on that first post where we even had the time to post about an individual suspected case," she says.

With the onslaught of new cases and information, such a post wouldn't make the cut

A sense of control — Moderating can be a nasty job in the best of times. Ask the moderators of Hacker News, or the moderators of Reddit's r/RoastMe, who often have to wade through toxic content and discipline bad-faith posters.

The moderators of r/Coronavirus have had to become one of Reddit's most elite teams in a matter of weeks. They are tasked not only with the usual moderator duties of banishing trolls, but with wading though a particularly grim news cycle.

Doherty says that, blissfully, the amount of trolls on r/Coronavirus has subsided as the subreddit has grown.

But moderating has impacted his ability to detach from the news, or even see the bigger picture. His brain is mired in the minutia of COVID-19 news. Sometimes, he admits, "it can be stressful."

As the team has grown, however, the pressures on each individual moderator has subsided somewhat. The dark days of waking up to a backlog of hundreds posts from the other side of the planet are now behind them, as they've recruited people from other time zones, Boggs says.

But there is still an endless cycle of news to curate, and sources to verify.

Maybe, though, that's not a bad thing. Boggs for one relishes the challenge and the sense of focus that moderating gives.

"Being able to moderate and makes me feel like I'm contributing or have a sense of purpose in a situation where otherwise I'm completely out of control," she says.

On r/Coronavirus, the moderators, posters, and people stuck at home have the time on their hands to take back that control. And if they get their way, the r/Coronavirus may be the one place on Earth where COVID-19 will never thrive or inspire panic.