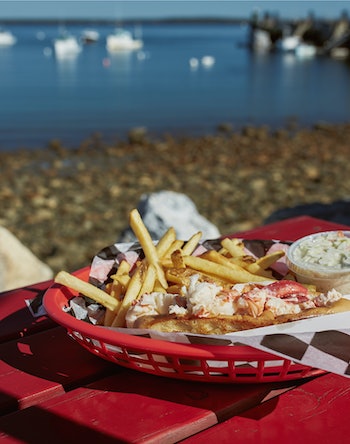 Bryce Smith was staring at the Atlantic Ocean in Bar Harbor, Maine, eating lobster. He was supposed to be in Oklahoma.

Smith had also visited the state's Cadillac Mountain, the first place to see the sunrise in the United States in the fall and winter. It was the finale of a 10-day road trip he embarked on November 9, more than 1,700 miles away from his home in Lawrence, Kanasas. He made stops in Baltimore, Washington, DC, New York City, New Haven, Connecticut, Philadelphia, and Boston.

At 18, he saw America alone, and truth be told, it felt pretty good.

“It felt like a good time to take a trip, and I went solo because I’m more apt to do something crazy,” he said. “My friends asked me why I did this, and I told them I was eating lobster at the ocean. I’m from Kansas, worlds away.”

Smith, who graduated high school earlier this year, said he intended to attend Oklahoma State University in September. But when it seemed like in-person classes would shift online, which he said “wasn’t what I signed up for,” he decided to take the semester off. He’s been delivering for DoorDash 50 hours a week to save up as much money as possible.

“I basically just grind,” he said. “I wanted a mental reset, [and a road trip] seemed like a fun thing to do.”

“I wanted to come home for Thanksgiving, and I didn’t want to fly,” he said. “I took it solo because I wanted it to be safer, along with the flexibility of driving at my own pace and not being on someone else’s schedule.”

Dixon was able to visit people and places he wouldn’t have the opportunity to see otherwise, including his uncle in Northern Virginia, Rocky Mountain, North Carolina, “to see a community of former Black New Yorkers,” and Charleston, South Carolina, to visit a friend.

“The highlight was some quiet driving time,” he said. “I caught up on some podcasts. I got to see different geographies and landscapes in our country. You just don’t see that when you fly.”

With a need to leave their homes but a widespread reluctance to sit on an airplane for hours, many Americans, like Smith and Dixon, are (or at least thinking about) hopping in their vehicles for a road trip, often by themselves. AAA projected Americans would take 683 million car trips from July through September, down only about three percent from last year, with the top destinations being Denver, Las Vegas, and Los Angeles.

Current times may actually make for better road trip conditions, as there has been less traffic on U.S. roads and at tourist spots across the country. According to a study published in 2015 in the International Journal of Tourism Research, author Constanza Bianchi, then of Queensland University of Technology, said solo travel was the fastest-growing tourism segment and was a way for people to “indulge themselves fully.” Solo road trips also provide several mental health benefits, according to experts, including opportunities for self-reflection and the development of critical life skills.

Julie DenOuden, a 37-year-old elementary school teacher in Los Angeles, describes herself as introverted and told Inverse she feels “very invigorated doing trips. It's a fabulous time to be thinking and doing self-reflection, especially about this past year. I reflected about the goals I set for myself and the highs for this year.”

DenOuden has been a frequent traveler most of her life since she went on road trips with her family during her youth. She’s taken solo road trips since she was 23 (DenOuden has more time off as a teacher than her friends, she added), and for the past two years, she’s challenged herself with different goals, such as visiting every Spanish mission or attending a home game of all 18 professional sports teams in California. She left for this year’s challenge -- to see every ocean pier in California -- on Nov. 20, her fourth trip of the year.

“The coast of California is stunningly beautiful, especially when you’re driving,” she said. “One benefit of solo trips is whenever I want to stop to take pictures or just look, I just do it. This has been a wild and crazy year, and as I was looking out to the sea, I thought, man, this Earth is so much bigger than me. It was a good reminder of how small we are as people in the face of such a challenging year.”

“You just don't see that when you fly.”

Dr. Todd Kashdan, a professor of psychology at George Mason University and author who’s written about the benefits of travel, told Inverse that solo trips offer people critical perspective on both themselves and the world because they get out of their normal surroundings and have sufficient, high-quality time to be alone.

“We spend an unfortunately small amount of time with ourselves, and don’t possess enough white space to focus on our thoughts and the creative process,” he said. “Rarely do we have time in our office place or a dense neighborhood to shift between different roles and aspects of our personality. It can be exhausting, demanding, or intense to be ‘on.’ You’re using a high level of mental resources, regardless of whether you’re an introvert or extrovert.”

He added, “Solo trips allow us to be under-stimulated enough such that random thoughts can intersect with each other and form unusual ideas. This is the starting point of emergent creativity.”

Kashdan said that being out in nature has a restorative effect that helps fight off the daily stress of modern life. Being forced to deal with different people and situations strengthens our mental toughness and provides memories of times when we overcame adversity.

“One of the benefits of solo road trips is removing your secure social base,” he said. “You have to fend for yourself. That alone allows you to supercharge the development of situational awareness, social skills, and performance. These skills are underdeveloped when we’re only able to spend time with people who are like-minded. When we travel and stop at a diner, concert, or park, you don’t get to pick like-minded people.”

Dr. Jean Kim, a psychiatrist and clinical assistant professor of psychiatry at George Washington University, said that solo road trips are a good fit during times of transition, such as a breakup or losing a job.

“A solo trip is about yourself, a personal journey, a chance to get in touch with your own needs and getting away from things that are pulling you,” she said. “There’s something inherently appealing about solo road trips because you’re taking a journey and seeing things along the way. It gives you a sense of control and self-knowledge.”

DenOuden attested to the mental benefits of solo road trips.

“It’s one of those life experiences you can’t get anywhere else.”

“You’re forced to become a problem-solver and decision-maker,” she said. “When you’re with other people and something goes wrong, you come together as a group. When I’m alone and problems come up, I have to figure out ways to solve it on my own. I have great map reading skills at this point.”

DenOuden, Smith, and Dixon all had the same advice for anyone considering their own solo road trips: Prepare in advance for where you want to go and things you want to see and do along the way.

“Just do it,” Dixon said. “Make a plan, but your plan can be loose. Be open to finding new things and stopping along the way.”

DenOuden added, “Having a plan really helps. It can feel uncertain, especially during your first solo trip, but having logistics worked out gives you a security blanket as you’re stepping out.”

Smith recommends that everybody go on their own solo road trip.

“It made the world smaller in my head,” he said. “It was definitely a fun time. It’s one of those life experiences you can’t get anywhere else.”