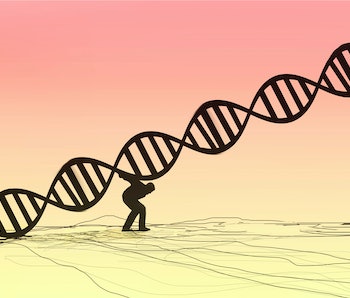 Everybody wants to live as long as possible. We try our best to take care of ourselves — we watch our diet, we stay active, and we throw away the cigarettes. Owing to our gallant efforts, and thanks to advances in science and medicine, human life expectancy across the world doubled in the 20th century. The average human can now expect to live past 70 years old.

Crucially, a new study has uncovered a potential new way of improving healthy aging in humans — because, while we may be living longer, those added years aren’t necessarily of good quality.

This is the key difference between someone’s lifespan — the number of years they are alive — and their “healthspan”. Healthspan is defined as the period of one’s life that one is healthy, or the years of our lives that are spent disease-free.

The global increase in life expectancy has paved the way for an ever-growing rise in late-onset diseases, such as Alzheimer’s, cancer, heart disease, and type-2 diabetes. The greatest risk factor for disease simply remains to be old age.

In turn, scientists want to uncover the molecular and cellular processes that underlie the cause of disease in old age, and, ultimately, find ways of impeding it. Now, research published Wednesday in the journal Nature points to a biological route that could lead to that achievement — if scientists learn how to manipulate these factors.

A team led by Shi-Qing Cai, a professor at the Institute of Neuroscience and State Key Laboratory of Neuroscience in Shanghai, China, took worms, specifically the nematode C. elegans, and employed a technique known as genome-wide screening. In doing so, they found 59 genes that were found to potentially play a role in regulating aging in the worms.

They also succeeded in finding two specific epigenetic regulators — proteins that are capable of modulating the expression of genes — that were shown to hamper the functioning of mitochondria, which are the powerhouse of the cell. If mitochondria aren’t working as well as they should, it can lead to a whole range of problems and has been thought to play a role in the development of Parkinson’s disease.

"This is relatively rare in aging biology."

The two proteins they identified, called BAZ-2 and SET-6, are also found in mice and humans. When the researchers removed one of these regulators (BAZ-2) from the mice, they witnessed a noticeable improvement in cognitive decline in the mice subjects as they aged. In turn, the human versions of these two regulators appear to play a role in the progression of Alzheimer’s; their expression in our frontal cortex was shown in the study to increase as we age.

Arjumand Ghazi, a scientist at the University of Pittsburgh School of Medicine who studies aging in worms but was not a part of this research, tells Inverse that this study is an exciting one — especially because it identifies genes that seem to impact the aging process when beings are older.

“This is relatively rare in aging biology — most genes that affect aging and age-related disease begin to have their effects early in life,” she explains. “From a translational perspective, this could lead to interventions that can be started later in life.”

Studies of this sort are very much “en vogue” at the moment, says Aric Rogers, a scientist at the Mount Desert Island Biological Laboratory. Still, Rogers, who studies the genetic mechanisms of aging, tells Inverse that this kind of research is “still a long way from therapeutic application”.

In any case, the study provides new and vital insights into how we age and the molecular mechanisms that underlie it. We may want to live forever, but life is better lived if we can age in a healthy way.

Abstract: It has long been assumed that lifespan and healthspan correlate strongly, yet the two can be clearly dissociated. Although there has been a global increase in human life expectancy, increasing longevity is rarely accompanied by an extended healthspan. Thus, understanding the origin of healthy behaviors in old people remains an important and challenging task. Here we report a conserved epigenetic mechanism underlying healthy aging. Through genome-wide RNA-interference-based screening of genes that regulate behavioral deterioration in aging Caenorhabditis elegans, we identify 59 genes as potential modulators of the rate of age-related behavioral deterioration. Among these modulators, we found that a neuronal epigenetic reader, BAZ-2, and a neuronal histone 3 lysine 9 methyltransferase, SET-6, accelerate behavioral deterioration in C. elegans by reducing mitochondrial function, repressing the expression of nuclear-encoded mitochondrial proteins. This mechanism is conserved in cultured mouse neurons and human cells. Examination of human databases shows that expression of the human orthologues of these C. elegans regulators, BAZ2B and EHMT1, in the frontal cortex increases with age and correlates positively with the progression of Alzheimer’s disease. Furthermore, ablation of Baz2b, the mouse orthologue of BAZ-2, attenuates age-dependent body- weight gain and prevents cognitive decline in aging mice. Thus our genome-wide RNA-interference screen in C. elegans has unraveled conserved epigenetic negative regulators of aging, suggesting possible ways to achieve healthy aging.