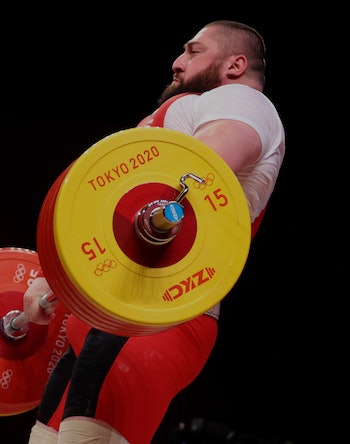 During the Olympics, we saw a range of different body types that challenged assumptions about strength and speed.

Interspersed among the muscular and defined swimmers and bantamweight wrestlers were super heavyweight weightlifters and shot-putters who looked almost … normal. Their strength was a disconnect: our brains generally conjure up images of “skinny” or “jacked” when fitness comes up. None of these folks were especially lean.

We generally think that if muscles aren’t immediately visible, then they’re not at their max — but a lean man can’t lift nearly 600 pounds over his head and smash three world records. Strength is more complicated than just seeing the muscles. So it’s worth unpacking the disconnect and asking three questions that can get at the aesthetics of strength.

Strength has a real if not immediately clear relationship to body shape. Being strong depends on muscle size and lifting ability — which means there’s an aesthetic component. Since putting on muscle is not very easy, we want to keep as much of it on as possible.

But the tension is held in the fat: the lower your body fat percentage is, the bigger your muscles will look. But it won’t necessarily make your muscles work better. In fact, it might get in the way.

Being big doesn’t mean you can’t be fit

In order for strength to build, lifters need to eat enough calories every day, with a certain composition of protein, fat, and carbs.

Maintaining this exact caloric equilibrium — calculated from a person’s weight, body fat percentage, and activity rate — theoretically puts on mostly lean muscle mass and doesn’t tack on too much fat.

This difference between process — called a “controlled bulk” — and “maintenance,” where a lifter maintains their weight, in food terms, isn’t that much: about two hundred calories, or one bag of Skittles. (“Cuts,” which add muscle and shed fat, are pretty difficult when done right, and take a long time.) These macro-based diets are all meant to keep muscle mass on, and possibly grow it, and keep fat at a minimum.

But what if an athlete wants something else? Lifters who want to tack on as much strength as possible may have different goals from the aesthetic ones baked into a macros-based diet. These athletes may be better off inhaling food through a “dirty bulk,” and gaining some fat with their muscle as they take their foot off the macronutrient pedal.

The concept that fat is good might be foreign to folks who go to the gym to lose weight. But being big doesn’t mean you can’t be fit. The guy who lifted 600 lbs. over his head isn’t made up of just muscle. An old strength training concept — “mass moves mass” — explains why he, and lots of other very strong people, don’t look like The Rock.

In strength-expressing sports, like shot-put, and at the super heavyweight level of weightlifting, where there’s no weight class, there’s no need to be thin. And because mass moves mass, the heavier athlete tends to be stronger.

Since it’s scientifically harder to add pure muscle onto a very tall frame, some of these athletes hold abdominal fat on top of their lean muscle mass. They look like what society might consider “fat.” But they’re actually in incredible shape.

Former Olympic lifter Mark Henry, who competed around 396 lbs. in Atlanta, wasn’t exactly slim but he also had 317 lbs. of muscle. He put on some fat because he’d gain muscle too. He was still incredibly quick and athletic.

That “extra” fat on Henry’s body sat atop muscles that were built up over decades of training. Henry and company aren’t piano movers: they’re more like defensive ends who don’t have to run. Because they aren’t sprinting, they weigh a little bit extra, so they can be stronger than the next guy, and compete for gold medals.

Why new lifters have to gain weight

Lifters who compete in weight classes can’t just maximize strength as superheavies do.

Weight classes — height classes, really — are made up of shorter lifters, whose levers are short enough that they can max out their muscle. The incremental advantage a superheavy gets from a power belly doesn’t exist here: It’s generally best for shorter lifters to be lean and hold as much muscle as possible.

Athletes who rely on speed also tend to have lower body fat percentages. And while muscle can’t make up for lack of skill at a sport, at the highest competitive levels, everyone’s talented, so strength becomes a requirement.

But what works for elite athletes doesn’t always translate to regular lifters. This limited aesthetic conception of strength — that muscles need to be seen to exist — can act as a stumbling block for workaday lifters beginning their journey.

Many untrained people associate the gym and heavyweights with people who look like two things: either Arnold Schwarzenegger or a very round man grunting under the squat bar. But because barbell work tends to focus on the back and legs, lots of powerlifters look pretty normal in work clothes.

Training and eating right will change a body, but new lifters who roughly stick to their macros won’t be in any danger of looking like Arnold — or a very round person — at least not right away.

But gaining weight is still a big psychological block in a world where, to quote Coco Chanel, you can never be too rich or too thin. It’s hard for new lifters to accept that they have to gain weight. And what’s more, most of us have to accept some fat if we want to get strong. Or, if we’re at a high BMI, our cuts will not always be linear, and we may not look different right away.

Really, it’s all about time. Lifters who push themselves with volume-based workouts — the kinds that get you better-conditioned, and stronger really quickly — are better off temporarily forgoing strict Skittle-free diets that maintain low body fat percentage and just eat enough so that they can get the most out of their program.

“In a room full of weights, being healthy and being skinny are two different things.”

But a temporary fast and loose eating regimen doesn’t mean lifters should constantly be bulking up and getting stronger 365 days a year. As noted by Mythical Strength, a great powerlifting blog written by a person who goes by Emevas, the best volume-based programs alternate between volume and tapering periods, where weight and reps are decreased. Even a really hard program is not supposed to be hard all the time. Those de-load periods, tailor-made for recuperation, also offer an opportunity, if a lifter wants, for fat loss.

Specifically, these low-intensity blocks are meant for “cutting”: a slow fat-loss, muscle maintenance diet. When followed correctly, the bulk-cut cycle mimics a lifter’s natural calendar. Lifters can maybe eat a bit extra during volume periods, and cut when the program tapers off. If they do everything right, should expect to gain around a half-pound to a pound of muscle a week, depending on their gender. Over time, they’ll get both stronger and lighter — and more importantly, will get better results in their weight classes.

But while periodizing high-intensity workouts with easier programming blocks is the best long-term way to get strong and conditioned, there’s no rule that says lifters have to cut weight when their programs get to a taper. It’s more of an optional drive: because most competitors need to maximize their muscles, they have to cut. But we don’t all compete.

The tradeoff for lifters who don’t cut is they might not win any competitions. But they might also keep some of the pernicious body image issues in lifting at bay — and they’ll still be getting stronger.

It’s the strength that’s the point. Just because someone works out with weights doesn’t mean they have to look a certain way. In a room full of weights, being healthy and being skinny are two different things. Food is fuel — not an enemy. If we want to cut, we can, later on. But just because we can’t see our muscles, doesn’t mean they’re not there.