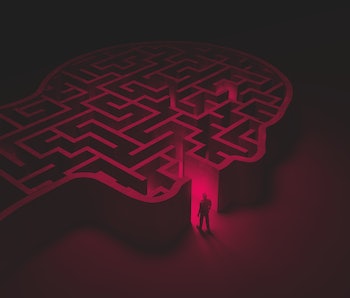 When making decisions, whether they are big or small, people can get stuck ruminating on the pros and cons. It’s easy to become overwhelmed imagining hypothetical scenarios or considering what can go wrong. Should you make that move? Is it really time to adopt a pet?

When you feel stuck or lost in life, one factor might make a crucial difference: your mindset.

Peter Gollwitzer is a psychologist at New York University who first introduced the term mindset into modern psychology in the 1980s. He tells Inverse there are two types of mindsets: implemental and deliberative.

“As soon as you give a person the task of choosing a goal, they automatically activate procedures that help them to choose a goal that is feasible and desirable,” Gollwitzer explains. “When you give a person a task or a goal to implement that next week, before you know it, procedures of planning are activated.”

While these divergent cognitive processes are automatic, you can actively kick them into gear. This week, Strategy explores how to harness your mindset, reprogram your reasoning, and ultimately, get closer to achieving your goals.

Why mindsets matter — In the early 1970s, when Gollwitzer was just starting out in psychology, the field revolved around a central question: Who am I?

At the time, Gollwitzer recalls, researchers focused on how people constructed their self-identity, arguing that people made their decisions solely based on desirability and feasibility. Generally, psychologists theorized that people internally asked themselves questions like what do I like? or what can I do? and then acted on those questions.

Gollwitzer was the first to theorize that people were asking themselves another question: Who do I want to be?

He reasoned that, perhaps, there’s an act of deciding and setting goals that puts people in a different mindset. He named it the “implemental mindset.”

“That’s where you're no longer thinking about feasibility and desirability; you're no longer deliberating the expected value of said outcome, but you are now interested in implementing your choice,” Gollwitzer says. “So you are interested in different kinds of information related to, ‘How do I get there? When do I act? Where do I act?’”

Gollwitzer spent the next four decades building a new field of modern psychology centered around people’s goals and motivations, and the mindsets that help them along the way.

Using screw-ups as starting points — When faced with an especially tough choice or task at hand, weighing the options can often throw people into what feels like an infinite loop.

The key to disrupting this painful loop is making what Gollwitzer calls “if-then” plans — steps that outline when, where, and how to move forward out of a situation. In developing these plans, it’s helpful to take the perspective of an outside observer or ask other people for more information.

“By having this simple ‘if-then’ plan as a self-regulation tool at your hand, you can use this weird feeling of being stuck and like you don't know what to do anymore, as a cue to move forward,” Gollwitzer explains.

In this planning phase, you harness a more action-oriented implemental mindset. Similarly, if you find yourself down a road towards an outcome that doesn't feel right, you can actively harness a deliberative mindset to reflect on what you want and what is feasible.

“You can program yourself to use a situation of screwing up as a starting point,” Gollwitzer says. “When I have some feelings that I'm lost or I've screwed up, then I tell myself, ‘Move forward, get some more information, get outside consultants, and ask for help.’”

In multiple experiments, Gollwitzer has demonstrated that by making such plans, people suddenly become less reflective — and more impulsive.

“You can actually make plans to end deliberation,” Gollwitzer says. “We call this planning to think. Planning is not only for action; it's also for reasoning.”

At the end of the day, activating a deliberative or implemental mindset can help you feel less like a victim of circumstance, and more of a proactive force.

How to dig yourself out of a decision-making paralysis

1. Take an outsider’s perspective: Oftentimes, people become too close to a certain decision or goal. It’s helpful to imagine the situation at hand as an outsider or someone without any skin in the game. Often, that process can help you see the bigger picture.

2. Get help: Ask a friend, colleague, or loved one for their perspective. Outsiders can help pinpoint the next steps you may be missing.

3. Seek information: Doing more research can also shine a light on the best option when you feel stuck.

4. Move forward: Sometimes, the best way to make a decision is to try something out. Actively taking steps in one direction can illuminate whether it’s the right one.