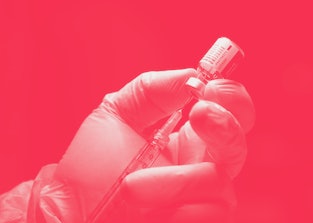 On Friday, in a historic first, the United States' Food and Drug Administration (FDA) issued an emergency use authorization for Pfizer’s vaccine for Covid-19.

It was a long-awaited decision, but one group arguably had the most to gain: The 43,000 vaccine trial participants who had been left to wonder when they could have the shot their bodies helped test for the masses.

Amid the breaking news, the answer to that question wasn't so plain.

On Monday, Pfizer attempted to clear up the matter. The pharma giant emailed participants to confirm those who live in long-term care facilities — or are healthcare workers — can get the vaccine now as part of the trial. Everybody else in the trial would have to wait for about six months, or after their fourth visit to the doctor as part of the study. That's according to an email sent to trial participants Monday, reviewed by Inverse.

At that point, a key group of people, those who received the placebo, will be able ask if they got the vaccine or the proverbial sugar pill. If they haven't gotten the real thing, they can get shot as part of the trial. Pfizer calls the plan "The Vaccine Transition Option."

Here's the rub — Why not give everyone — even the placebo group — the vaccine now? It's a point of scientific contention: Some scientists argue administering the vaccine to all trial participants will muddy the data that enable clear examination of efficacy, safety, and other key factors about this new vaccine.

Since November, when data showed that Pfizer's vaccine was 95 percent effective in preventing disease, tension mounted over which volunteers would be offered the final vaccine, and when. The moment scientists know a treatment works in a trial is an ethically critical point, as a team of NIH researchers argued in a recent editorial published in Science. It triggers scientists to rethink the morality of not offering that treatment to everyone in the study.

That issue was top of mind when an advisory board reviewed data on the Pfizer vaccine last week. As the FDA advisory board noted on Friday, that ethical tension within trials can bubble over into the real world if participants leave the trial, believing they’re not going to get the vaccine they helped create, or lose confidence in the process.

Julie Pfeffer, a trial participant who volunteered for the Pfizer Phase 3 trial, found herself wondering if she would be vaccinated over the weekend — or if she had been vaccinated already. On August 10, Pfeffer received a shot in her arm, the first of two. Initially, she thought it was the placebo. Now, after developing a fever after the second shot, she’s not so sure.

"I think it is 100 percent clear that you have to offer it to the placebo group."

Like the other 43,000 participants in Pfizer’s vaccine trial, Pfeffer could have been inoculated with a vaccine which, as far as we know, is 95 percent effective in preventing Covid-19 disease. Or, she could have received a placebo. She just doesn't know.

Study participants have roughly an equal chance of being designated to either group — but to preserve the integrity of the science, trial participants will not know which group they are assigned to.

This process has now yielded a vaccine the FDA deems safe and effective enough to justify an emergency use authorization. While it's not technically FDA-approved, the authorization prompted wide dispersal of the vaccine — with trucks rolling and planes flying to all 50 states, laden with vaccines destined to be received by healthcare workers and members of long-term care facilities.

Inverse spoke with Pfeffer recently about her hopes for the vaccine. “I think for any trial like this, you want to demonstrate to the world at large, that you're treating your trial participants well,” Pfeffer says. “If they can show that they're doing right by the volunteers I think that goes a long way to getting volunteers in the future."

Why the decision was made — Pfizer’s move to bring the vaccine to the trial placebo group comes after days of confusion.

While the FDA advisory committee had a heated discussion about the fate of trial participants on Thursday, no decision regarding their access to a vaccine was reached. When the vaccine EUA was recommended on Thursday, Pfeffer still hadn’t heard anything from Pfizer on the fate of the placebo group. It wasn't clear how or when they would be offered the vaccine.

Arthur Caplan, a bioethicist at New York University, says the confusion over whether or not to give placebo group participants the vaccine could have been avoided. He considers it an easy answer — but he has clashed with colleagues before over the ethics.

“I know people are debating this but I think it is 100 percent clear that you have to offer it to the placebo group,” he tells Inverse. “It was a problem that we could anticipate and I think we didn't manage it well."

One issue was the mismanagement of the trial participants' expectations. Pfeffer said she would like to have received the vaccine as a thank you for participating, but understands this wasn’t a guarantee when she signed up. She did it “just to help the world at large.”

Examples from other Covid-19 vaccine trials cast doubt on how clear it was to the participants they were not being offered early access to a vaccine in exchange for their altruism. Speaking to the New York Times, one trial participant from Johnson & Johnson’s coronavirus trial, Judith Munz, said she thought she would be offered a vaccine as soon as the trial showed it worked. She then had to sign a modified version of the consent form, indicating she may not receive the vaccine right away.

“I am owed that vaccine,” Munz told the Times.

Her sentiment echoes statements made by Francis S. Collins, the head of the National Institutes for Health (NIH), in July: “I think probably we owe them, as a consequence of their participation in the trial, some special priority in terms of access to the vaccine."

What comes next for Pfizer volunteers — Munz and Collins' arguments bubbled up before the Johnson & Johnson trial actually reached that critical moment: when the data show the vaccine isn’t just an experimental treatment that might work, but one that does work.

Pfizer passed not one, but two landmark moments, forcing scientists to rethink the ethics of the vaccine trial before arriving at a clear plan. If the data showing the vaccine is efficacious wasn't enough, then the FDA's green light was, Caplan says.

That landmark moments trigger a responsibility to offer the vaccine to trial participants at some point, Caplan argues. Trial participants should be given a pathway to getting the vaccine, even if they're not first in line, he says. But perhaps more importantly: They should be allowed to know now whether or not they actually got it in the first place.

The new Pfizer plan offers a path to receiving the vaccine, but doesn’t guarantee the other half: telling people which shot they actually got in the first place.

The gold standard of medicine is the double-blind, placebo-controlled, randomized clinical trial — a study in which groups are assigned to a placebo or treatment group at random, and neither scientists nor participants know who is in which. Letting people know what group they’re in would “unblind” the study, which would diminish its scientific power.

But Caplan doesn’t see unblinding as a huge issue. It's still possible to learn about vaccine side-effects and safety by continuing to follow participants. There is also the practical issue that people might drop out of trials in order to get the vaccine, something the FDA and Pfizer both raised concerns about during last week’s review of the vaccine.

Pfizer’s updated protocol indicates it has accepted the imminent unraveling of the trial, and will now offer the vaccine to people as it becomes available. But study participants will be encouraged to remain in the dark about which group they are in. A Pfizer spokesperson told Inverse by email:

“We believe that we have an ethical duty to create a pathway within the study for interested, eligible participants in the placebo group to have access to the vaccine as regulatory authorities make decisions about authorization or approval of the vaccine candidate around the world."

Why it matters — Last week, during the Pfizer emergency use authorization recommendation meeting, John Goodman, the associate dean of Clinical and Translational Research at Stanford, warned not distributing the vaccine to placebo volunteers could ignite "ethical tension." The allure of more data as a reason to delay distribution, he cautioned, could also be dangerous.

“This will get a lot of publicity, meaning that recruitment to future vaccine trials will be that much more difficult because of a collective loss of trust,” Goodman said at the meeting.

Glen Nowak, a former communications director of the Center for Disease Control and Prevention’s National Immunization Program and a professor at the University of Georgia, says that the public is interested in the stories and experiences of people within trials. What they have to say, can have an affect on how people feel about vaccines and future research as well.

“I've actually seen a few [trial participants] on TV, and in news stories, talking about their experience, because people are really interested knowing," Nowak tells Inverse.

With as much as 50 percent of the U.S. population skeptical about getting a coronavirus vaccine, avoiding mass flight from a high-profile clinical trial could have advantages long after this specific trial's end. The more positive trial participants' experience appears to be, the better it may serve the public health push to vaccinate.

Meanwhile, Pfeffer has found temporary solace, even if she won't be getting a vaccine — or learning she already received it — in the immediate future.

“Pretty decent news for us,” she says. “As good as I could have expected.”