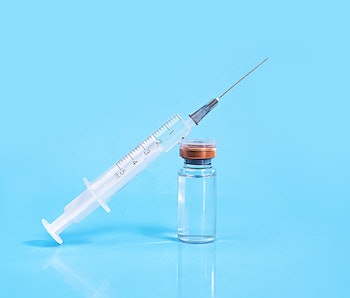 November has been a huge month for vaccine news, and promising vaccine results continue to roll in. On Monday, the University of Oxford and the drugmaker AstraZeneca released exciting interim results from a Phase 3 trial of another coronavirus vaccine candidate, indicating two different levels of efficacy depending on the dosage.

The Oxford vaccine news makes for a fortunate pattern: For the past three weeks, Mondays have meant vaccine announcements. This announcement follows those made by the drugmakers Pfizer and Moderna.

But unlike the other leading vaccine candidates, the Oxford vaccine may prove to be advantageous in three unique ways:

It's the potential for controlling the spread of the virus that makes the Oxford vaccine especially different, based on these early results. Other vaccine trials have not reported any data on how the vaccines perform in the face of asymptomatic cases. The Oxford vaccine press release suggests there were fewer asymptomatic infections among those who got the vaccine.

The CDC estimates that asymptomatic cases account for about 50 percent of infections, according to guidance updated in November. A vaccine addressing that form of infection could limit the risk of unknowingly spreading the virus, and blunt a major driver of the pandemic.

William Schaffner is an infectious disease specialist at the Vanderbilt University Medical Center. He tells Inverse that the light at the end of the tunnel, originally spotted when the first vaccine trial results were released earlier this month, is getting brighter.

“The light is getting brighter at the end of the tunnel,” says Schaffner, “Delivery of a vaccine is maybe the hardest part of this whole enterprise, but nonetheless, it's good.”

An impact on transmission — The Oxford University press release cited “early indications” that the vaccine may help curb viral transmission. That's because there appear to be a lower rate of asymptomatic cases in the vaccine group, meaning they test positive but show no symptoms.

This is a very “provocative” element of the press release, says Schaffner. Even with vaccines that prevent disease, social distancing guidelines will remain in-tact, he explains. Even if people are protected, they may still be able to spread the virus to someone else without ever getting sick themselves.

“The recommendation that will be ongoing is that even vaccinated people have to maintain social distancing and mask-wearing, which will make a lot of people grumpy,” Schaffner says.

The results from the two other vaccines in Phase 3 trials can’t tell us whether or not they address asymptomatic transmission because these trials are designed to only look for participants with visible symptoms, and then use testing to confirm who has a case. To tell if a vaccine can protect against asymptomatic infection, scientists need to test regularly — even if people don't seem sick.

Tal Zaks, the CEO of Moderna, has called testing that involves identifying asymptomatic cases “operationally untenable” for a Phase 3 clinical trial. The University of Oxford and AstraZeneca did it anyway — but only in one arm of their trial. Scientists in the U.K. arm of the trial (which accounts for some of these interim results) swabbed all patients weekly. The U.S. arm and the Brazilian arm of the trial only tested those who show symptoms.

But it's still just a start. Speaking on CNBC’s “Squawk Box," Ruud Dobber, President of AstraZeneca US, cautioned that it was “a little bit too early to be definite” about how the vaccine affects asymptomatic cases —though we may see more on this soon as more information is released.

What’s going on with the dosage? — This vaccine performed far better when a half dose was given first, followed by a full dose. That’s not unusual, says Schaffner. It’s what he calls a “prime-boost strategy.”

But the reason the team gave a half-dose, reports Reuters, is "serendipity." Researchers administering the vaccine to trial participants in the U.K. "underpredicted the dose of the vaccine by half," explained Mene Pangalos, the head of AstraZeneca's non-oncology research and development. Subsequently, the team observed expected side effects were milder, so they decided to continue with the half dose.

The rollout forecast – The Oxford Vaccine, unlike Pfizer and Moderna’s vaccine, uses a viral vector (a chimpanzee adenovirus that can’t cause illness) to insert the genetic instructions to make a piece of the coronavirus’ spike protein. The body then learns to recognize the real coronavirus.

A vaccine using this approach hasn’t been granted full FDA approval. But the technology has been used before in vaccine candidates for Ebola or for animal vaccines.

Schaffner adds that these vaccines using this approach can be made “quickly and rather inexpensively.”

As Toby Peters, a professor of cold economy at the University of Birmingham wrote in Wired, we lose about 25 percent of vaccines en route from factory to a delivery point due to temperature lapses. A vaccine suitable for milder temperatures lets us bring the vaccine closer to people who will eventually get it, Schaffner explains, regardless of freezer capacity.

However, the Oxford vaccine has its own roadblocks to face.

Keeping different dosages organized (a half dose, followed by a full dose) will require meticulous record-keeping and attention, says Schaffner. Organizing, and even manufacturing, half-doses could prove to be this vaccine’s sticking point.

“Once again, it’s a little bit of a complication. We can manage it, but there will be slip-ups,” says Schaffner.

What’s next – We still don’t have complete data from this vaccine trial. For example, it’s still a mystery how well this vaccine affects those in different age groups.

However, the results to tell us another vaccine will soon be added to a growing arsenal. The vaccine will still need to go through full review by the FDA. When speaking to CNBC, Dobber predicted we might start to see the end of the pandemic materialize by next summer.

Editor's Note: On 12/8, scientists at Oxford University in conjunction with AstraZeneca published the results of this Phase 3 trial in the journal The Lancet.

These results mark the first time a Phase 3 clinical trial has been published in a scientific journal. Previous vaccine results have been released via a press release. The Oxford/AstraZeneca press release was criticized for not including age breakdowns of those who got the more effective vaccine dose, or acknowledgment that those who did get that dose got it thanks to a dosing error.

The full results raise new questions when it comes to that all-important 90 percent efficacy number, and the protection against severe disease.

Before this vaccine is approved in the US, we will likely need more robust answers that explain the discrepancy in efficacy between the two doses, and confirmation of the vaccine's effectiveness in older people. As Moncef Slaoui, the head of Operation Warp Speed told Reuters last week:

"Frankly, unless there is a very clear explanation based on facts and data for what’s behind those two numbers, it's very likely that that package would not be sufficient for an approval — I’ll be the first one to say it."

In a call with journalists on Tuesday, Andrew Pollard, the head of the Oxford vaccine group said "it's fair to say that it needs looking into to explain the intriguing result," in response to questions about the efficacy differences between the two dosages.