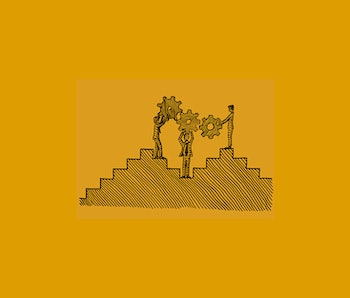 Every time you make a connection with another person, your network grows a little larger. That’s why it’s a smart strategy to attend networking events in your field -- business, medicine, academia, media, library science, etc. -- and seek out people in your industry. But many of us might be neglecting a vital part of our professional lives: our coworkers.

It’s easy to see why most people wouldn’t network at the office -- the belief that networking is only good for new opportunities, as in, finding another job. You can’t find that at your current job. Many people are also held back by a dirty feeling they get when networking, according to a 2014 Administrative Science Quarterly study.

According to the study’s author, Tiziana Casciaro, that feeling can be overcome.

“When people start to see networking as being about more than just themselves, such as an opportunity to develop the networker's knowledge of their industry,”Casciaro says.

They also must believe they have something to offer the other person, even if they’re just starting out in their careers.

As it turns out, getting to know your co-workers better accomplishes both of these goals.

Expand your network — Although it may feel like it, you do not work in a vacuum. The people in your office have their own interests, work histories, and of course, networks. Taking the time to know your co-workers, especially those in other departments, opens up new possibilities. Someone you’d like to meet with may know the person who works three desks over. Making that connection can be a shortcut to a productive meeting.

You have to take the longview as well: just because a connection may not seem helpful at the moment, you never know what will happen when you are at your next job, or the one after that. A deep network can be a boon in many situations.

Increase your value — While your job may be one small part of the operation, networking with people from across your company gives you a 360-degree view of the business. With that understanding may come an appreciation for your work and insights into how to collaborate better. You’ll also have people to call on when you need help, and vice versa. This will boost your credibility and reputation within your organization, which could prime you for internal opportunities such as a new position or promotion.

Hopefully, this incentivizes you to speak with people in the elevator or at the water cooler, or sit down at a table with people you don’t yet know.

You never know what opportunities will shake out. At the least, maybe you’ll make a new friend.