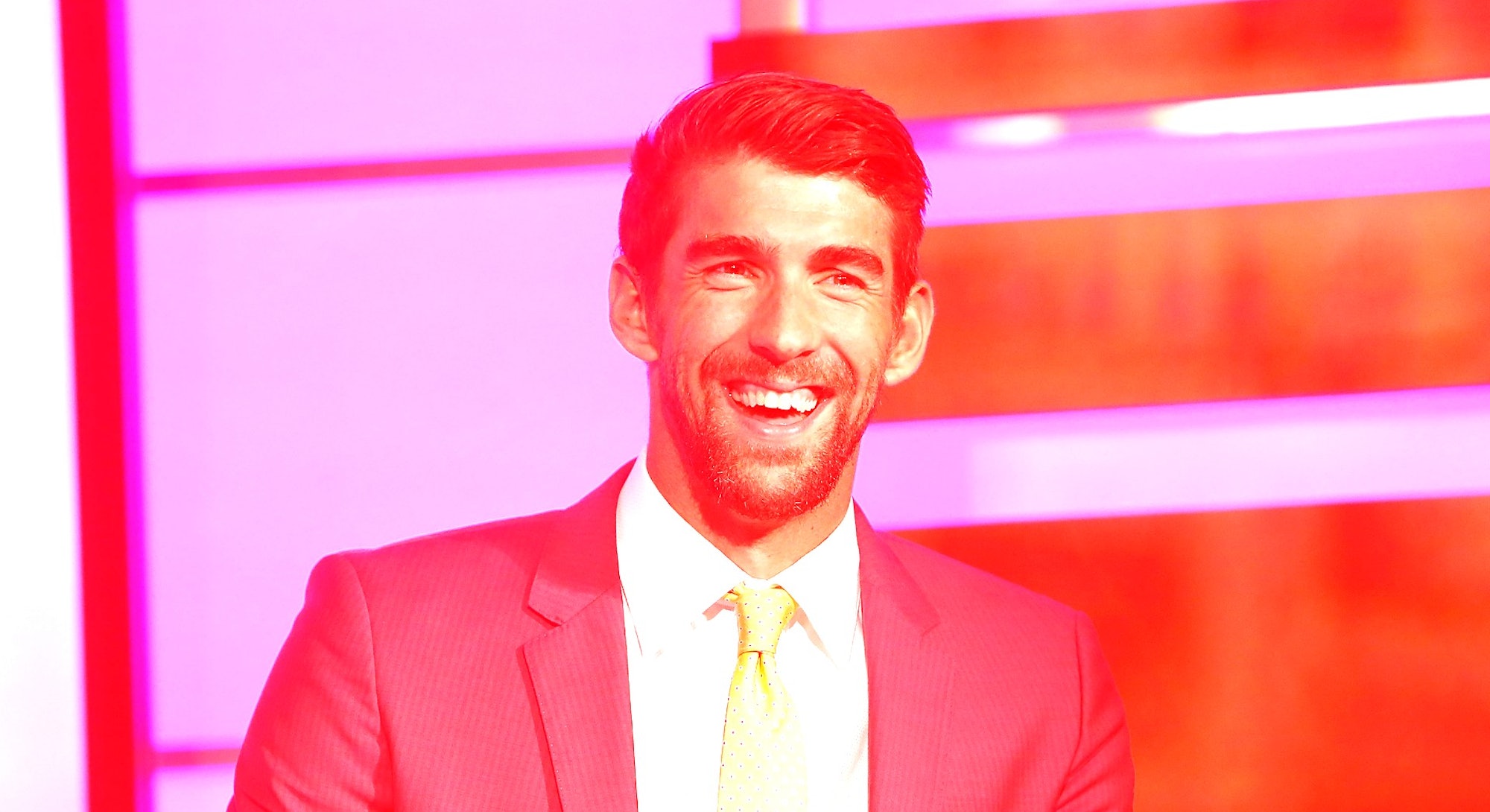 It's December 2020 and Michael Phelps is sitting in his own shit. As he puts it, the pandemic has slowed down reality — disrupting his “go, go, go” pace and clarifying his core values.

“For lack of a better term, I've had to sit in my own shit during some of this and, yeah, it's been painful,” Phelps tells Inverse. "But you know, it's also been probably what I needed to have the opportunity to grow."

The swimming phenomenon and most decorated Olympian in history is no stranger to darkness. Behind the highs of his gold medal wins, Phelps has faced deeply stressful periods and bouts of depression in his athletic and personal life — even moments where he wanted to give it all up.

But four key tactics kept him going and managing his mental health: setting crystal clear goals, looking at the big picture, remembering he's not alone, and asking for help.

To those out there who feel similarly stuck or helpless, Phelps offers this piece of advice: “Don't be afraid to feel vulnerable.”

With his mental health advocacy work and a new partnership with Colgate's Optimism Project, Phelps hopes his fine-tuned, positive approach can help people facing other challenges. During the pandemic, when every person on the planet is going through "some kind of struggle," as Phelps says, these strategies could be pivotal to make it to the other side.

I'm Ali Pattillo and this is Strategy, a series packed with actionable tips to help you make the most out of your life, career, and finances. This week, we talk with Phelps about how to stay positive in a chaotic world.

What do you say to a person who feels helpless, hopeless, or like their life has gone on hold because of the pandemic?

Am I optimistic most of the time? Of course, but obviously, I'm a human. So I'm gonna go up and down and ride those roller coasters of emotion.

There are parts of the [pandemic] where I felt like I was worthless and where I felt like I was hopeless. That's the biggest thing for me, where I was able to take a step back and look at the bigger picture. I'm lucky to walk out wherever in the house at any given time, and I can see one of my three energetic boys. And that right there is the biggest smile that you'll ever see, no matter what state I'm in.

For me, this whole lockdown has really helped slow me down. And I feel like that's so good because I feel like I'm getting back to those core values and those core principles; it was something that I needed. I'm somebody who's more of a homebody. For lack of a better term, I've had to sit in my own shit during some of this and, yeah, it's been painful. But you know, it's also been probably what I needed to have the opportunity to grow.

To those out there who are afraid or do feel that way, I would say: don't be afraid to feel vulnerable. That's a word that can be very scary to a lot of people. But when you start showing vulnerability, you allow yourself to grow. It's eye-opening what happens when you show the slightest bit of vulnerability. It's been something for me that I can say saved my life.

To those people who feel like they are helpless, you're not alone. Know there are things you can do whether it's talking to somebody or writing stuff down. But keep your head up, because 2021 is coming. And I feel like when we do go through something like this, we come out ten times harder and ten times stronger.

It's tricky, but together we can achieve so much more. The biggest thing is to ask for help. That was something that I struggled with for a long time. I didn't want to show that sign of weakness, but I learned the hard way that I couldn't do it all by myself.

Some people might look at your athletic success and have trouble relating. Have there been moments of adversity in your personal life where this mental strategy has benefited you?

During this pandemic, I've had moments where my mental health has really gone up, where I've struggled with depression more than I had in the past. And, again, that's because of the unknown.

For me at that point, it's really about trying to keep my goals close and simplifying things because, in a time like this, where there is so much uncertainty, we don't have that social interaction, and we don't have all of these things that we are accustomed to, that will set us up to potentially spiral. But if we can think back to what our goal really is and what is important to us at the end of the day, with a few deep breaths, we're able to slow time down, almost.

That's something during this pandemic that I've been able to really see. I've always been on the go, go, go, and always trying to compete and to get faster. Now it's really almost about slowing time down and paying attention to the things that are important and meaningful for you, and that really make you who you are as a person.

What inspired you to be involved with the Colgate Optimism Project? How are you helping instill this kind of “Olympic mindset” or positivity in the young people you're working with?

Look, my career wasn't perfect; I did have struggles in the pool and out of the pool. And I had to overcome some difficult times. So I think when you look at a few of these members, when you see what they're doing — from delivering food and necessities to printing 3D masks for protective gear to creating a nonprofit comic book series for inclusivity for disabled children — it seems at this time that it should be challenging. But if you look at these Gen Zers, and what their mindset is, and how they are overcoming these obstacles, I feel like it's something that we all could learn so much from.

“When we do go through something like this, we come out ten times harder.”

So for me, especially in this time, where there is so much unknown, where every single person on this planet has to be going through some kind of struggle, it's just incredible to see how much hope there is out there. And the thought of us getting through this is a realistic goal. These six members, what they're doing around their communities, it's mind-blowing. So to be able to make such a positive impact during this is something for me to take my hat off to.

I had the privilege to talk with them a week or so ago. We really jumped into the word can't.

I was taught to remove that word from my vocabulary because it's such a negative word. When you say you can't do something, you've made your mind up and you're not going to be able to do that. So when I was talking with them, and sharing that with them, it was fun for me to see the excitement on their face, because it was almost like a different approach.

There is a lot of negativity flying around all over the world. But you know what, we can do whatever we put our mind to, and these six Gen Z members are a prime example of that. So it's pretty incredible just to see how many roadblocks and challenges they're facing and able to blast right through them.

Can you tell me how you are helping people navigate these difficult times?

If I can help push these kids to break these barriers, then that's something that I look forward to. The fact that there are people out there that don't care if somebody is telling them they can't do something, or they'll never amount to anything … I know what that feels like. I had those feelings as a kid, and I had people tell me that I would fail.

Those little things stuck with me during the darkest, most challenging times, and they helped me prevail.

How can someone turn negative self-talk into fuel to achieve their goals?

I write a lot. I keep a lot of data. So I know how much sleep I get each night. I'm pretty regimented. So there are certain things that I can keep track of that if I see things kind of flaring up, then I can try to take control over them. It doesn't matter who you are or where you come from, there are always ups and downs.

So for me, it's just always thinking about those goals. Because if those goals are meaningful enough to me, and I know they're not easy, right? For me to go out and say I wanted to win eight gold medals in the Olympics — people looked at me like I had a dozen heads. But with practice, with preparation, with belief, it was possible.

Did I have negative times? 100 percent. There were times I wanted to quit. But those goals meant so much to me that there was nobody that was going to stand in my way.

The pandemic has slowed Phelps' breakneck pace and reminded him what's most important, he says.

Why is it important for people to realize they don't have to overcome these challenges alone?

I think you said it yourself: we're not alone. That's something we really all should think about more because there are other people that are struggling just like us.

Lion breaths are what we teach our sons, Boomer and Beckett, when they get to a phase where they feel overwhelmed or sad or angry. They take a deep breath and let their emotions sit a little bit, and then they're able to talk about how they're feeling. That right there, for me as a dad, is the greatest feeling in the world. I feel like that's the answer to everything — if you can control your emotions and understand your emotions. And I feel like that's one of the most challenging things to figure out.

There are so many people who are struggling. It doesn't matter what you're struggling from, struggling is hard. And it's very difficult, and especially when we're locked out of social situations and our "routine" or our norm.