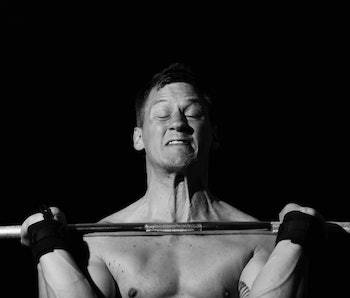 When I was deep into Olympic Weightlifting and training daily for two hours and only progressing marginally, I inhaled everything I could read about the sport so I could improve.

During this time I came across a nugget online which I haven’t been able to replicate or corroborate since — a tall tale that Mohamed Ehab Youssef, an Egyptian lifter then competing in the 77 kg class, was big into meditation. He meditated, the post said, before lifts and before practice sessions and even mid-set, and credited his breathing techniques for giving him clarity and success on the platform.

Ehab, at the time of that interview — likely around 2015 — was an elite and competitive lifter, if undersized. Ropey and tight, like a gymnast, he medaled in international competition, winning silver medals at the 2014 and 2015 World Championships, and a bronze at the 2016 Olympics. But he was mostly known for his decidedly un-meditative state of mind. A high-energy lifter, he became popular within and outside the sport for the series of untraditional accessory exercises and stretches he’d put on on his Instagram: leapfrogging with a barbell, lifting with plates on his back, or balancing them, or both, or becoming one with five barbells and resembling Narasimha, the fierce avatar of a Hindu god who's on the cover of a Cro-Mags record.

To the extent you can grasp anyone’s personality off their social media, Ehab wasn’t quiet. But while he’d play up a sort of cartoonishness in training and on video, he was different in competition: balanced, violent, powering through his lifts with a severe, dense speed. After his final lift in the 2015 Worlds, he dropped to the ground and spun around and yelled. It was like if Paul O’Neill was a foot and a half shorter, or if Chris Farley had lost 20 pounds.

Ehab works through his exercises.

A 2016 interview sustains the meditation rumor. Youssef said he visualized his heavy lifts in practice and competition. Before he'd get on the platform he'd take a quick second and would pull off what looked like a meditation. He'd go blank, become quiet, and breathe out.

Which isn’t much. That breathing ritual is just about something that comes with a barbell, a practice that's more common than not among lifters, part of most routines if never discussed. Which makes sense. Meditation, which is something between a mental workout and a thousands-year unbroken practice baked into most major religions, more than dovetails with lifting. It's a natural marriage.

Mediation and weightlifting: A match made in mindfulness

At its base a set of breathing exercises that calm down the mind, meditation has been studied widely enough that the mental effects of daily practice — on the brain’s cortex — is about comparable to what Smolov does to thighs, but without crippling soreness or need to inhale a rotisserie chicken a day. The benefits of a meditative practice are legion — calmness, perception, psychedelia — and the holistic practice often gets used as a naked self-improvement technique. Which makes sense on a material level — the world, seen and experienced through our minds, is better framed when that muscle is stronger — but is too utilitarian, and misguided. But if it works it works, and athletes like Ehab, who win or lose on the basis of grams, take any advantage they can get.

Even with LeBron James meditating daily, mindfulness and physical ability are still framed as opposites. It’s jocks and nerds: what’s more different from the brain than a bicep? First impressions of lifting are typically it's all heavy weights, force, pre-workouts, and rage, and that meditation is easy, and mostly sitting around.

But they’re not very different. So much of lifting is built on a foundation of high school football training — seriously — as a way to build explosive strength, and on functional movement, of which flexibility is an integral part. And prolonged meditation, like sitting in lotus for an evening, can be as taxing as squatting, and requires a serious amount of core strength and rigidity.

Both meet in the middle, with successful lifters crediting meditative practices, lower-intensity yoga, and mobility work for improving their lifts and strength. Arnold Schwarzenegger, bodybuilding’s Babe Ruth, practiced transcendental meditation at his peak in the 1970s, repeating mantras for a clear head and drugless high — he said it changed his life. (He visualized his poses as well, laying them out mentally before a competition, and then winning.)

Frank Zane, the sport’s Lou Gehrig, went deeper and saw bodybuilding as a sort of Zen practice. "You are one with the set," he said, "there is nothing else." (He'd go full yogi in his autobiography.) Stateside, meditation was first popularized and centralized in Southern California, where so many of the best bodybuilders lived. It was in the air.

Closer looks show how enmeshed the two really are. Powerlifting, which at first skews stereotypically male sport — big muscles, tattoos, lots of meat — runs on health, and balance. Its foundational lifts rely on abstract breathing cues and presence to work.

It's all over the literature. The Valsalva maneuver, a breathing technique that slows down heart rates and which has risky returns in studies, has become a sort of crib sheet for the squat: exhale from the mouth with your nose pinched, which slows your breath, tightens your core, and ups your lifts. Even when it’s not explicit, meditation is there. Proper breathing pushes the squat, and many step-by-steps for the squat come with instructions that read, in isolation, as a set of mental directions. Count to five, fill your stomach with air, take a big breath, and focus your vision.

Take the lift out of some squat instructions and they read like a prompt from a meditation guru. Lifters call this getting your mind right; doing these breathing steps first thing in the morning is not far from a mindfulness practice.

And in Olympic weightlifting, it’s all somewhere in the middle. The sport, dominated by Eastern Bloc countries since the 1960s and functioning for the past 20 years as China versus the field, is distinctly non-American, and flinches away from the aggressive, brute force aesthetics that sometimes characterize powerlifting and modern bodybuilding. Olympic lifters are flexible and fast; they jump high and are explosive. They’re open.

And while it’s reductive to credit those countries' organic character to the fact that they're halfway across the world, their success gets copied. Chinese weightlifting techniques get sold to amateurs, and serious national programs build their systems after Russia’s or China’s, where lifts are taken apart and doted over, and where empty bar work reigns. Coaches from there cross borders, hold seminars and rise up the ranks. It all makes for a sport with a different sort of touchdown dance and explains how a rowdy Instagram star like Ehab goes quiet before lifts.

Even four years later, it's still wild to see him taking that extra breath. But force only takes you so far. At the world's level, where everyone’s elite, mistakes are rare and are mostly mental. You can’t grit your way to the top. You can only stay there. Which feels correct. The path between a lift and meditation isn’t short but identical.

Leg Day Observer is an exploratory look at fitness, the companion to GQ.com’s Snake America vintage column, and a home for all things Leg Day. Read past editions of Leg Day Observer for more thoughtful approaches to lifting and eating.