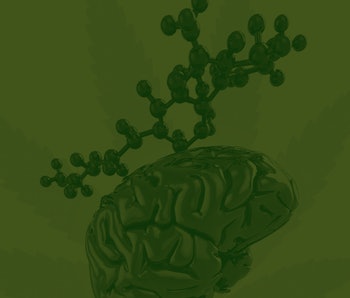 The human brain's relationship with marijuana is complicated.

For some, the primary reason for smoking weed is the desire to relax. At low doses, THC — the main psychoactive compound in marijuana — lowers anxiety. But in other people, THC causes anxiety and paranoia — and regular use isolates a person socially.

We're not quite sure why this disparity exists, but a new study has shed a little more light on the matter.

The reasons for why marijuana affects the brain differently likely has two do with three factors:

It is the third — how THC affects cannabinoid receptors in the brain — that poses the most interesting question to neuroscientists:

We’ve only known that humans and other mammals have cannabinoid receptors since the late 1980s. What's more, we don’t fully understand how they modulate the effects of neurotransmitters.

A study published Wednesday in the journal Nature brings us a step closer to understanding how THC affects social motivations in the brain. The finding has the potential to illuminate why using high doses of marijuana prompts some people to withdraw socially — certainly a question some have posed after getting high.

After a decade of research, scientists believe using marijuana can change behavior related to sociability because of persistent activation of CB1, which is one of the two known subtypes of cannabinoid receptors. CB1 disrupts the chain of events that allow brain cells to be energized. At least, this is what happens in the brains of mice.

Giovanni Marsicano, a researcher at the NeuroCenter Magendie and the lead author of the new study, is careful to note that it’s difficult to transpose animal studies to human situations.

“This study shows that there are mechanisms that link THC to alteration of social interactions in mice,” Marsicano tells Inverse. “These are due to disturbances in the normal chain of energy use in brain cells. Although it is plausible that similar mechanisms are present in humans, we cannot be sure at this stage.”

In 2012, Marsicano and his colleagues discovered that the CB1 receptor is present not only on the outside but also on the inside, of cells — particularly on the “powerhouse” of the cell, mitochondria.

Because the CB1 receptor is located on mitochondria in the cells, scientists think THC may affect how energy is managed in the brain.

The methodology — This study focused on CB1 receptors on the membrane of the mitochondria, within astrocytes. In the brain, there are two main populations of cells: neurons and glia. Astrocytes are one particular type of glia, and they have the important job of transforming glucose from the bloodstream into particular molecule lactate, which is then passed on to neurons.

The process of turning glucose into energy for the brain prompts neural activity and behavioral responses. After the team examined mice injected with THC, they discovered that THC blocks the ability of these cells to transform glucose into lactate, slightly starving neurons in the brain.

“We think that this partial ‘starving’ of certain neurons is the final cause of the social interactions observed," Marsicano says.

When these results were first spotted, Marsicano, along with his collaborator and friend Juan Bolanos, a researcher at the University of Salamanca, almost couldn't believe it.

“Slowly over the years, all the pieces of the puzzle came into place,” Marsicano says. “After performing all possible controls, we were finally convinced that we found a novel mechanism to explain not only one of the most deleterious effects of THC — but also how brain energy control regulates complex behavior.”

While epidemiological and clinical studies have shown that persistent use of high doses of marijuana can be associated with social withdrawal, what these results exactly mean for people needs further examination, because of differences between the human brain and the brains of other mammals, like mice.

What's next — The study opens the door to new research, like exploring the process between neuron starvation and social impairment.

“This is the beauty of our job,” Mariscano says. “Each answer provides new questions.”

Abstract: Astrocytes take up glucose from the bloodstream to provide energy to the brain, thereby allowing neuronal activity and behavioral responses. By contrast, astrocytes are under neuronal control through specific neurotransmitter receptors. However, whether the activation of astroglial receptors can directly regulate cellular glucose metabolism to eventually modulate behavioral responses is unclear. Here we show that activation of mouse astroglial type-1 cannabinoid receptors associated with mitochondrial membranes (mtCB1) hampers the metabolism of glucose and the production of lactate in the brain, resulting in altered neuronal functions and, in turn, impaired behavioral responses in social interaction assays. Specifically, activation of astroglial mtCB1 receptors reduces the phosphorylation of the mitochondrial complex I subunit NDUFS4, which decreases the stability and activity of complex I. This leads to a reduction in the generation of reactive oxygen species by astrocytes and affects the glycolytic production of lactate through the hypoxia-inducible factor 1 pathway, eventually resulting in neuronal redox stress and impairment of behavioral responses in social interaction assays. Genetic and pharmacological correction of each of these effects abolishes the effect of cannabinoid treatment on the observed behavior. These findings suggest that mtCB1 receptor signaling can directly regulate astroglial glucose metabolism to fine-tune neuronal activity and behavior in mice.