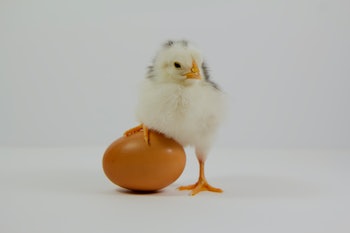 One of the immutable truths about being alive is that we age. This happens at every level, down to our cells. When they divide, our cells copy our DNA into each new cell. But as the weeks, months, and years pass, the health of our cells declines and they become less adept at these functions. The DNA giving instructions to the cells can become damaged; cell division slows, and eventually stops completely.

An interesting anomaly to this process is the human egg cell, or oocyte. While these cells do ultimately accrue damage, they stay remarkably well preserved for decades; sometimes remaining dormant in ovaries for up to 50 years without losing their reproductive capacity. Exactly how oocytes accomplish this has been something of a mystery to cellular biologists. Researchers at the Centre for Genomic Regulation in Spain may have solved that mystery. Their study, published this week in the journal Nature, outlines how young human egg cells skip a fundamental metabolic reaction, allowing them to stall DNA damage and cell death. The findings could have implications for everything from fertility to cancer treatments.

The Background— The cellular processes of oocytes are hard to study because accessing them requires direct surgery into the ovaries to access oocytes. Additionally, says Elvan Böke, senior author of the study, “Oocytes are very limited in number in a woman – severe sample restrictions combined with very limited availability made it hard to study immature oocytes for a very long time.”

This difficulty has been especially frustrating for researchers because these cells are unique in so many ways, and the potential knowledge gleaned from research into them is vast.

“Female germ cells that become eggs are unique in many aspects: They are formed before birth and remain dormant in the female body for many decades before they are activated prior to fertilization,” Böke says. “They provide virtually all of the cytoplasm and organelles to the new embryo, as well as the maternal genome.”

These unique aspects raise a fundamental question for the researchers: How do oocytes keep a youthful cytoplasm for decades in humans while cells everywhere else in the body age and die?

Böke says, “There is very little known on the biology of dormant oocytes and we are fascinated by their longevity and healthspans.”

What they did— Using ovaries from women aged 19 to 34 who had undergone ovarian surgery as well as mice and frog ovaries, Böke and her colleagues “made the most of the fact that oocytes are larger than the majority of other cells in the ovary – therefore, after being mixed in a suspension, they land down the fastest to the bottom of the dish,” Böke says. “We employed this trick to isolate oocytes from human ovaries.”

From there, they used a combination of live imaging, spectrometry, and a host of other techniques to monitor and analyze the cellular function of oocytes.

“By shutting down complex I and keeping the rest of the mitochondrial respiratory system active, early oocytes keep their mitochondria active enough to support the synthesis of essential biomolecules such as the amino acids and heme, while keeping their activity low to avoid damaging Reactive Oxygen Species,” Böke says.

Reactive Oxygen Species (ROS) are produced as byproducts of mitochondrial activity and can damage the cell through oxidative stress. Mitochondrial complex 1 is thought to be one of the main sources of ROS.

ROS produced as byproducts of mitochondrial activity “are associated with lower rates of fertalization and embryo survival,” the authors write.

What it means for the future— The research could lead to breakthroughs in understanding and treating fertility challenges. ROS produced as byproducts of mitochondrial activity “are associated with lower rates of fertilization and embryo survival,” the authors write.

“1 in 4 cases of female infertility are unexplained – this signals that there are many [unknowns] in our knowledge of female reproduction,” Böke says. “Our discovery sheds light on the curious problem of how an oocyte can live 20 to 30 years but retain a youthful cytoplasm. For example, now we can start checking the levels of complex I subunits in immature oocytes of women with unexplained fertility problems and see whether we can explain some of these problems.”

The findings could also help cancer research and the preservation of oocytes in those undergoing cancer treatments.

“Complex I inhibitors have previously been proposed as a cancer treatment. If these inhibitors show promise in future studies, they could potentially target cancerous cells while sparing oocytes,” Böke said in a statement.

Boke and her colleagues hope to build on this research by “investigating the mechanisms that allow oocytes to survive without complex I,” she says. “We are especially interested in the energy sources dormant oocytes rely on in the ovary. This line of research will have major implications linking the diet and nutrition to female fertility.”

More like this
Mind and Body
7.29.2022 10:45 AM
Why this pervasive immune chemical may be behind pain in IBS
By Miriam Fauzia
Mind and Body
7.28.2022 1:59 PM
What you need to know about the surge of monkeypox cases in the US
By Katie MacBride
Mind and Body
8.1.2022 12:30 PM
Unripe bananas have a hereditary cancer prevention property — study
By Elana Spivack
Related Tags
Share: