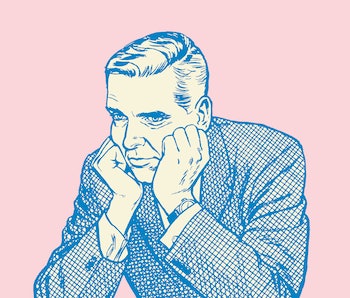 There’s a creeping feeling many of us have experienced at work or at home when faced with a monotonous, repetitive task: boredom. And while it can often feel like the mind-numbing tedium of boredom is slowly consuming your soul, according to researchers, it can actually be good for you.

University of Central Lancashire researchers Dr. Sandi Mann and Rebekah Cadman conducted two studies and found that boredom could boost creativity because it gives us time to daydream.

In the first study, they had 40 people copy numbers out of a telephone directory for 15 minutes, then asked them to come up with different uses for a pair of polystyrene cups. A control group was only tasked with the cup exercise. Surprisingly, the people who performed the boring task came up with more creative uses for the cups than the other group.

In a second study, 30 people also copied numbers, but there was also a second group that read numbers from the directory rather than copy them. It turns out this reading group was more creative than the writing group, and the researchers suggested it’s because reading is a more passive boring activity.

“Boredom at work has always been seen as something to be eliminated, but perhaps we should be embracing it in order to enhance our creativity,” Mann said in 2013. “Do people who are bored at work become more creative in other areas of their work — or do they go home and write novels?”

A 2017 study from the Georgia Institute of Technology also looked at the benefits of daydreaming. Researchers used an MRI to measure the brain patterns of more than 100 people who were instructed to focus on a stationary point for five minutes. With this control data in hand, the research team compared it with tests that measured the participants’ intellectual and creative ability, along with a questionnaire on how much participants’ minds wander in daily life. The people who said they frequently daydreamed scored higher on intellectual and creative ability and had more efficient brain systems as measured in the MRI machine.

“Boredom at work has always been seen as something to be eliminated, but perhaps we should be embracing it in order to enhance our creativity.”

“People with efficient brains may have too much brain capacity to stop their minds from wandering,” said Eric Schumacher, co-author of the study. “People tend to think of mind wandering as something that is bad. You try to pay attention and you can’t. Our data are consistent with the idea that this isn’t always true. Some people have more efficient brains,” meaning more capacity to think.

According to the researchers, if you find yourself zoning in and out conversations or tasks when “appropriate, then naturally tune back in without missing important points or steps,” you likely have an efficient brain.

But what about people who don’t have a tendency to daydream? A 2019 Washington State University study provides hope by showing how people can learn to better cope with boredom.

To reach their conclusion, the researchers had 54 people respond to questions about boredom. They then performed the mind-numbing task of clicking pegs on a computer, which would turn them by a quarter, for about 10 minutes. Participants were fitted with a special cap that measures brain waves at 128 spots on the scalp.

Those who told researchers they’re more prone to boredom had more activity in the right frontal area of their brains, which increases when people feel more negative emotions. When people think about other things — i.e. daydreaming — activity goes up in the left frontal area.

These results show that people can take advantage of boredom by, say, thinking about projects or what to make for dinner or creating lists in their heads.

“We had one person in the experiment who reported mentally rehearsing Christmas songs for an upcoming concert. They did the peg turning exercise to the beat of the music in their head,” Perone said. “Doing things that keep you engaged rather than focusing on how bored you are is really helpful. The results of this paper show that reacting more positively to boredom is possible.”

Obviously, it should be said that boredom shouldn’t be sought. The Washington State University researchers found that people who experience boredom tend to have more anxiety and are more prone to depression. There’s also another danger, according to Mann, after conducting another study on boredom that was presented in 2016.

“We crave fatty and sugary foods when we are bored,” she said. “This strengthens the theory that boredom is related to low levels of the stimulating brain chemical dopamine and that people try to boost this by eating fat and sugar if they cannot alleviate their boredom in some other way.”

The important thing seems to be: find an outlet. That's what a young physics student by the name of Albert Einstein sought when he applied for a job at Federal Office for Intellectual Property in Bern, Switzerland. Today, the office is better known as a patent office. Carefully managing his time on and off the job, Einstein later described the job as "that worldly cloister where I hatched my most beautiful ideas." Which is a very polite way to say he was bored.

Individual differences across a variety of cognitive processes are functionally associated with individual differences in intrinsic networks such as the default mode network (DMN). The extent to which these networks correlate or anticorrelate has been associated with performance in a variety of circumstances. Despite the established role of the DMN in mind wandering processes, little research has investigated how large-scale brain networks at rest relate to mind wandering tendencies outside the laboratory. Here we examine the extent to which the DMN, along with the dorsal attention network (DAN) and frontoparietal control network (FPCN) correlate with the tendency to mind wander in daily life. Participants completed the Mind Wandering Questionnaire and a 5-min resting state fMRI scan. In addition, participants completed measures of executive function, fluid intelligence, and creativity. We observed significant positive correlations between trait mind wandering and 1) increased DMN connectivity at rest and 2) increased connectivity between the DMN and FPCN at rest. Lastly, we found significant positive correlations between trait mind wandering and fluid intelligence (Ravens) and creativity (Remote Associates Task). We interpret these findings within the context of current theories of mind wandering and executive function and discuss the possibility that certain instances of mind wandering may not be inherently harmful. Due to the controversial nature of global signal regression (GSReg) in functional connectivity analyses, we performed our analyses with and without GSReg and contrast the results from each set of analyses.