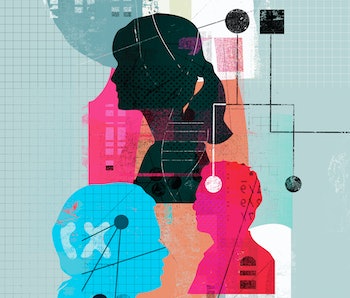 In 2018, 26 million people bought genetic ancestry tests in an effort to illuminate their family history. In turn, they were emailed percentages and pie charts — tools that morph complicated population genetics into bite-sized takeaways. The presentation of consumer genetics is simple. What's complicated is what comes after that genetic knowledge is filed into an inbox.

For the past two years Wendy Roth, a sociologist from the University of Pennsylvania, has sought out the answer to a very complicated question: Do genetic tests influence the way that people think about race?

So far, it looks like the answer is yes — sort of. Roth argues that genetic ancestry tests might actually be polarizing people's beliefs about race. Crucially, whether or not a person's beliefs about race changes after being tested depends on one thing: their knowledge of basic genetics.

Roth’s new study, which makes this provocative conclusion, was published Wednesday in the journal PLOS ONE. The study included 802 white participants and suggests companies like 23andMe may be unintentionally boosting potentially harmful beliefs.

Understanding the meaning behind data

This study found that, after taking a genetic ancestry test, people with low genetic knowledge became stronger believers in racial essentialism. This is the belief that race is purely genetic and defines people’s core essence (how smart, fit, outgoing, or kind they are).

“For your ancestry, you need to dig deeper, and you need to be able to understand the science behind it,” Roth tells Inverse. “If you just take it at face value, the results can reinforce some fairly negative views about people.”

Racial essentialism can be a dangerous line of thinking, feeding into racist opinions that one race is inferior to another, Roth says. This belief system has been linked to atrocious historical events like apartheid and the Holocaust, as well as hate crimes and discrimination.

"If you just take it at face value, the results can reinforce some fairly negative views about people."

The study suggests genetic ancestry companies should do more to clarify what their tests can or can not say, and provides a cautionary tale for test-takers.

"I hope that this study helps people realize that it's important to understand the genetics behind these tests before you take them," Roth says.

What’s in a gene?

Roth and her colleagues recruited and randomly assigned 802 non-Hispanic, white people to either take genetic ancestry tests or complete no testing at all. Half of the group took a test from Family Tree DNA, one of the largest providers of genetic ancestry tests. Before and after the participants took the test, the team evaluated their views on connections between genetics and race through surveys.

Initially, it seemed like the test results didn’t make a difference.

“If you look at everybody all together, on average, taking these tests does not influence belief in racial essentialism,” Roth says. “But that seems to be because different people have different reactions, which seem to average out.”

When Roth looked at two ends of the spectrum — at the people who had a basic understanding of genetics and those who didn’t — she found some serious differences. Genetic tests intensified people’s views of racial essentialism, if they didn’t understand the facts or science of genetics.

The effect comes down to how the test results are contextualized and how much people understand about their genes. Scientists think that 99.9 percent of the human genome is exactly the same. Genetic variants create differences in skin color or physiology, but those technically have nothing to do with race. Genetic diversity is far more complicated than categories like "white" and "black," which are social constructs.

“Race is not just about your genes and what they determine in terms of your appearance or your skin color," Roth explains. "It's also about how society treats those categories."

No genetic test can tell you your race, says Roth.

Direct-to-consumer genetic testing is a billion-dollar industry. While test-takers make the investment for a variety of reasons, their motivations are linked by the fact that these tests can provide an opportunity to reconcile with a past that hasn't been possible before.

In some cases, these tests can connect people with long-lost relatives, or simply help people better understand their personal identity. But they are also used by white nationalists as a way to evaluate their own "racial purity." This group discusses their results on the website, Stormfront.

The genetic ancestry testing companies don’t do enough to explain population genetics or the limitations of their results, Roth explains.

But a lot of people don't necessarily know the difference, she says. Roth argues that, when presenting results, consumer genetics companies should do more than add the caveat that we're all 99.9 percent the same genetically. While these companies often preach the idea that "we're all connected," they don't actually explain why.

"To really understand what's going on here and what it means for who you are and for your ancestry, you need to dig deeper, and you need to be able to understand the science behind it," Roth says.

In the future, Roth hopes to conduct this same study with a more diverse study population — this time, the participants were all white. That fact itself is made complicated by the subject matter: Even if the study participants identify as white, they aren't actually. At least, they aren't biologically.

Regardless, Roth notes, "people aren't going to stop taking these tests." That's a moving train that's out of the station. What could slow it down, and make it more accurate and good-for-mankind, is if companies figure out how to keep their data from fueling essentialist beliefs.

More like this
Mind and Body
6.26.2022 2:00 PM
Why scientists think these dietary supplements may help treat depression
By Sarah Sloat
Mind and Body
6 hours ago
Weight training: What is the ideal rep range for your goals?
By Sam Reiss
Mind and Body
6.30.2022 11:00 AM
Male birth control is at our fingertips. Will we ever grasp it?
By Elana Spivack
Related Tags
Share: