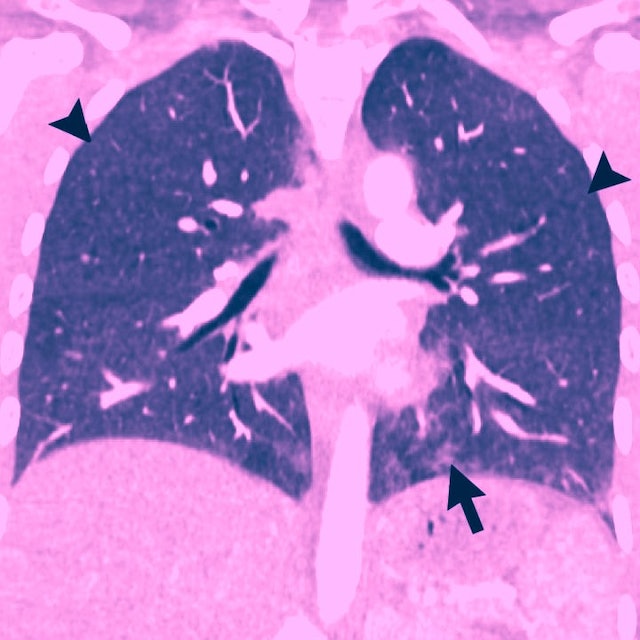 After surging to 2,668 cases, the vaping-related lung injury now called EVALI has finally started to slow down. During this brief respite, scientists are assessing the damage and examining how EVALI moved through the lungs of thousands of people — and claimed 60 lives.

The goal: to get a better sense of how to beat it for good. Luckily, that solution could emerge because of newly released lung images, which tell the story of EVALI's dangerous progression in black and white.

‌‌Right now, EVALI is a diagnosis of exclusion because doctors have to rule out numerous other diagnoses deciding on it. From the symptom side, it's easy to confuse EVALI with flu symptoms: A report published in the New England Journal of Medicine in September 2019 revealed that the most common symptoms included shortness of breath, cough and chest pain. Patients also complained of nausea, vomiting, diarrhea, and abdominal pain.

However, a comprehensive review article published Tuesday in the journal Radiology suggests that the key to identifying EVALI is an advanced understanding of how the illness changes the lungs. An analysis of 25 lung scans revealed two major patterns of lung damage. In turn, these patterns might help doctors become better at diagnosing EVALI, explains Seth Kligerman, the review's first author.

"If one of the more common imaging patterns is encountered in the appropriate clinical setting, this can alert the physician to obtain a more detailed history in regards to vaping," he tells Inverse

What the lung scans show

In the paper, the authors suggest that there are a few hallmark characteristics of EVALI in the lungs. The first, and most common (in 19 of 25 patients presented in this analysis) is organizing pneumonia — a type of inflammation in the lungs that eventually causes scarring, which in turn, makes it even harder to breathe.

The second distinguishing feature highlighted by this analysis is a pattern of diffuse alveolar damage. This is a condition when the alveoli sustain widespread injury (alveoli are tiny sacs in the lungs that allow oxygen into the lungs and shuttle carbon dioxide out). This kind of damage is also commonly seen during acute respiratory distress syndrome, another life-threatening disease.

Sean Callahan, a specialist in pulmonary disease at the University of Utah (who was not a part of this study) tells Inverse that when a healthy lung is scanned it typically looks black in the image. Crucially, the lungs of patients diagnosed with EVALI appear more white and grey when scanned.

"When people develop organizing pneumonia or diffuse alveolar damage there's a lot of white/grey areas in the lungs, replacing the usually black areas," he tells Inverse. These white/grey areas correspond to portions of the lung filled with fluid and inflammation."

Importantly, neither of these patterns on their own is enough to totally justify an EVALI diagnosis. But these patterns, in combination with an honest answer about whether or not someone has hit a THC vape, could help doctors really distinguish a case of EVALI from something else.

What does vitamin E acetate have to do with it?

Early on in the hunt to identify what might cause EVALI, scientists in New York State narrowed in on vitamin E acetate, a viscous thickening agent commonly used by black market scammers. An Inverse investigation in September 2019 found that vitamin E acetate products were easily bought and sold online, and are used to trick buyers into purchasing low-quality THC vape products.

In a January 2020 paper released in Toxics, that same team of scientists analyzed 38 vape cartridge samples taken from the first 10 patients with EVALI in the state. Sixty-four percent of those samples contained vitamin E acetate. They also discovered six commercially available cannabis thickening agents also contained the thickened squalane and the terpene alpha-Bisabolol, which imparts a floral scent.

Callahan explains that, for now, vitamin E acetate is indeed the leading culprit — though so far, the data only shows a correlation between the EVALI and the thickener. But if it is the real cause, he suggests that there are two ways vitamin E damages the lungs.

What likely happens, Callahan hypothesizes, is that when vitamin E acetate is broken down by the high temperatures associated with vaping, that leads to "toxic byproducts that lead to direct damage."

He adds that, from there, scientists suspect that there could be some kind of "chronic immune system dysfunction related to vaping" that may speed along the process.

But to confirm that, Callahan notes, more research needs to happen.

"There are likely additional combinations of flavors, vaping constituents, and high temperatures that can lead to pulmonary injury."

Fortunately, scientists are closing in on the causes of EVALI — and the CDC increasingly understands what black-market thickening agents and fake companies helped spurred this calamity in the first place. But there are still some huge unanswered questions that remain.

"There are likely additional combinations of flavors, vaping constituents, and high temperatures that can lead to pulmonary injury," Callahan says.

Now the challenge is understanding what exactly those combinations are and how researchers can identify them. And in the meantime, patients and policy-makers will have to grapple with the damage already done and decide what to do about it.

Abstract: Proposed as a safer alternative to smoking, the use of electronic cigarettes has not proven to be innocuous. With numerous deaths, there is an increasing degree of public interest in understanding the symptoms, imaging appearances, causes of, and treatment of electronic cigarette or vaping product use–associated lung injury (EVALI). Patients with EVALI typically have a nonspecific clinical presentation characterized by a combination of respiratory, gastrointestinal, and constitutional symptoms. EVALI is a diagnosis of exclusion; the patient must elicit a history of recent vaping within 90 days, other etiologies must be eliminated, and chest imaging findings must be abnormal. Chest CT findings in EVALI most commonly show a pattern of acute lung injury on the spectrum of organizing pneumonia and diffuse alveolar damage. The pathologic pattern found depends on when in the evolution of the disease process the biopsy sample is taken. Other less common forms of lung injury, including acute eosinophilic pneumonia and diffuse alveolar hemorrhage, have also been reported. Radiologists and pathologists help play an important role in the evaluation of patients suspected of having EVALI. Accurate and rapid identification may decrease morbidity and mortality by allowing for aggressive clinical management and glucocorticoid administration, which have been shown to decrease the severity of lung injury in some patients. In this review, the authors summarize the current state of the art for the imaging and pathologic find- ings of this disorder and outline a few of the major questions that remain to be answered.