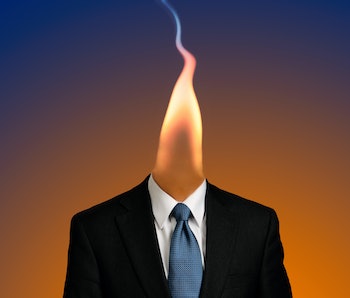 To date, researchers in organizational psychology have primarily focused on the role of leaders in promoting or preventing success. There is a lot of research on bad bosses. But what about bad employees?

In a 2019 study, published in the journal Academy of Management, scientists asked that very question: What if employees are guided by the wrong values, lack a moral compass and compassion for others, and use their positions to pursue their own goals?

The research highlights the power of individual “bad actors” at work, whose behavior can toxify a company. The study also reveals how one can spot a “dark triad” behavior among their coworkers: What, exactly, should you do if your coworker is acting like a psychopath, narcissist, or Machiavellian?

This week, we explore the 15 signs you work with someone with dark triad traits, and how to keep these potentially harmful behaviors from negatively influencing you and the company at large.

The dark triad— In psychology, the dark triad is a constellation of three socially aversive, partly overlapping traits: narcissism, Machiavellianism, and psychopathy, the study's authors describe. All three traits are characterized by the “tendency to influence others for selfish gains.”

Two psychology researchers, Delroy Paulhus and Kevin M. Williams, coined the term “dark triad” in 2002. Generally, the dark triad involves people who show some of these red flag behaviors but not necessarily enough to be diagnosed with narcissistic or antisocial personality disorders in a clinical setting.

While these traits overlap, there are key differences:

A narcissist has a particularly strong sense of entitlement, self-importance, and need for power. For narcissists, achieving attention (at almost any cost) is the primary driver of behavior. In the workplace, this often means narcissists are charming and expressive to get others’ admiration, or they are aggressive and hostile to their rivals to boost their own reputation.

When companies are led by narcissistic CEOs, they tend to be overconfident decision-makers, a pattern that causes extreme and fluctuating performance. Narcissistic CEOs tend to favor bold actions that attract attention, as well as overestimate their own performance.

Interestingly, there are situations where narcissists can act for the good of the organization, but the motivation is always their own self-enhancement, the researchers explain in the study.

Similar to narcissists, people exhibiting Machiavellianism always look out for themselves. Machiavellians are sly, deceptive, distrusting, and manipulative, researchers say. They also tend to be cynical, dislike humanity, and are callous, striving for goals like money, power, and status.

This group sees others as a means to their own ends, scientists say. They distrust others and tend to pursue goals that only have personal benefits.

While Machiavellians don’t have to be the star of the show, they tend to be highly strategic, acting like a puppeteer pulling strings behind the curtain. At work, Machiavellians sometimes hide knowledge from others as a way to get ahead. They will also consider lying, cheating, and misrepresenting information if that helps them to control a situation. Meanwhile, they are good at forming political alliances and cultivating a charismatic image if it benefits their personal agenda.

Sometimes seen as the most insidious trait in the dark triad, psychopathy is characterized by a lack of empathy and remorse, as well as a reckless and manipulative interpersonal style. Psychopaths are impulsive and enjoy inflicting harm on others.

This group is likely to thrive in organizations that require a rational and emotionless behavioral style, a strong achievement focus, a willingness to take risks, and a charismatic appearance, the researchers say. Often, psychopaths tend to take strategic actions that distract coworkers from their personal agendas and make others feel inferior.

“By creating chaos in the organization, as well as in coworkers’ personal lives, they can pursue personal agendas without detection,” the study’s authors write. “They not only enjoy hurting people; they strategically use humiliation and bullying to direct other people’s attention away from their hidden selfish activities.”

How does the dark triad influence their coworkers?

Across the board, dark triad behavior can harm both individuals and an organization at large.

Often, the negative behaviors of one person can reduce trust, elicit negative feelings, and lead to perceptions of inequity. In turn, team members can become defensive, have angry outbursts, or withdraw. These downstream effects ultimately hamper cooperation, creativity, and performance.

To avoid the dark triad from setting off a cascade of downstream effects, it's crucial to first learn the signs of these behaviors and foster a workplace that makes such behavior unacceptable.

Based on their research review, psychologists outline 15 red flags to be on the lookout for:

Coworkers who spot a red flag behavior should “say something," study co-author Birgit Schyns, a psychologist at NEOMA Business School, advised in a related statement. "Don’t just let it slip. Talk to the person. And talk with others to find out if it happened to them."

If it is a one-off scenario, that may not be cause for concern. But if the dark triad behavior becomes consistent, it's important for leadership to know so they can assure it doesn't happen again, Schyns added.