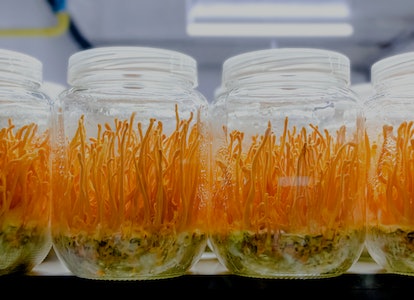 In the future, people getting ready for a flight — and fearing impending jet lag — might fit an assortment of additions into their carry on: masks, gloves, and maybe a medicinal mushroom hailed for delivering animalistic sex drive.

That's because a new study suggests that a synthetic form of cordycepin, a compound found in a medicinal fungus with a reputation for keeping bedroom doors closed, may help ease the pain of jet lag.

Cordycepin is the active ingredient in a fungus called C. militaris. This fungus gets its sexy reputation because it's similar to a rare fungus called C. sinensis, which is found protruding from the corpse of dead caterpillars high in the Tibetan Himalayas. The difference is that C. militaris is much cheaper, and in turn, much easier to get. (C. sinesnsis has memorably been described as "Himalayan Viagara" and sells for about $35,000 per pound in China.)

In this study, a synthetic form of cordycepin was evaluated to see if it could be curative for something else: jet lag.

The results were positive: In mice, scientists found that synthetic cordycepin drastically helped the animals adjust to time change. Normally when mice are exposed to an 8 hour time change — imagine flying from New York to Abu Dhabi — it would take them 10 days to adjust. The mice on cordycepin took only four days.

Erquan Zhang, the study's senior author and an assistant investigator at The National Institute of Sciences Beijing, tells Inverse that these results suggest that cordycepin can help reset our circadian rhythm. That's the cycle of hormone release that governs our sleep and wake cycles as well as other processes. It's also known as the biological clock and the body clock.

"We want to let people know that drastic and quick changes for our body clock are possible," Zhang says.

The study was published Wednesday in Science Translational Medicine.

The body clock— The biological clock has little to do with the time on an actual clock. It's a cycle of hormone release in the body that is sensitive to light, that's relative to our genes – there are "morning larks" who naturally awake early and "night owls" who find they're most active late at night.

When those schedules get out of whack, people can develop serious health conditions — an effect especially seen in night shift workers. Working against your biological clock can also affect your quality of life: It can make exercise feel harder or affect mental health.

The average American lives about 75 minutes out of sync with their biological clock, a 2018 Cell paper estimated. This phenomenon is called social jetlag. It refers to a misalignment between your social time and your biological time, as opposed to the jetlag you'd get from flying to a new time zone.

Why a fungus can benefit the body clock — This study examined whether a synthetic form of cordycepin could eventually fine-tune our body clocks and help us manage social jetlag and travel jetlag alike.

The team performed a series of experiments on cells and in mice. When they dosed mice with either 15mg/kg or 45 mg/kg of the synthetic cordycepin, the mice were able to more easily able to adjust when they were forced to live in a "time zone" 8 hours earlier than what they were used to, as compared to mice who did not receive the compound.

That same pattern held when the mice were put in a time zone 8 hours behind their own (imagine flying from New York to Baker Island, an uninhabited island about halfway between Hawaii and Australia).

"In both cases, our drug administration shortened the adaptation time to at least one half," says Zhang.

How is this possible? — The team found the synthetic cordycepin can bind to an enzyme called RUVBL2, and influence transcription of clock genes. These are genes when are turned "on" and "off" as the body goes through our 24-hour cycles.

RUVBL2, importantly, was abundant in areas of the mouse brain like the suprachiasmatic nucleus of the hypothalamus. This is the light-sensitive area of the brain that is the master controller of our circadian rhythm.

Cordycepin binds to RUVBL2, which creates a cascade of changes. First, a crucial protein is forced to leave chromatin, a structure that condenses DNA into packages (like a .zip does for images). Once that protein leaves, other genes related to the circadian rhythm, called E-box genes, are transcribed freely.

Cordycepin can be thought of as a key that "unlocks" the ability to transcribe those genes. Once that happens, a new oscillation (or a cycle of 24 hours) begins. The clock is reset.

Overall, Zhang theorizes that this "magic drug can change the clock phase up to 12 hours."

"A timed regulation of our internal body clock is possible."

Because this study was conducted on mice, more work needs to be done to gain an understanding of how this happens in people. But those who might benefit most, Zhang says, are shift workers and travelers who are "dire need" of a manner to control their body clocks.

Abstract: Transcriptional regulation lies at the core of the circadian clockwork, but how the clock-related transcription machinery controls the circadian phase is not understood. Here, we show both in human cells and in mice that RuvB-like ATPase 2 (RUVBL2) interacts with other known clock proteins on chromatin to regulate the circadian phase. Pharmacological perturbation of RUVBL2 with the adenosine analog compound cordycepin resulted in a rapid-onset 12-hour clock phase-shift phenotype at human cell, mouse tissue, and whole-animal live imaging levels. Using simple peripheral injection treatment, we found that cordycepin penetrated the blood-brain barrier and caused rapid entrainment of the circadian phase, facilitating reduced duration of recovery in a mouse jet-lag model. We solved a crystal structure for human RUVBL2 in complex with a physiological metabolite of cordycepin, and biochemical assays showed that cordycepin treatment caused disassembly of an interaction between RUVBL2 and the core clock component BMAL1. Moreover, we showed with spike-in ChIP-seq analysis and binding assays that cordycepin treatment caused disassembly of the circadian super-complex, which normally resides at E-box chromatin loci such as PER1, PER2, DBP, and NR1D1. Mathematical modeling supported that the observed type 0 phase shifts resulted from derepression of E-box clock gene transcription.