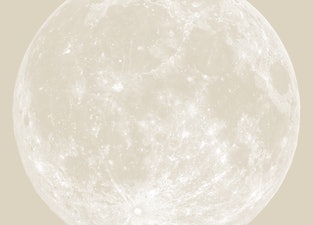 The number of minutes the Moon could knock off your sleep.

Sleep study reveals how the Full Moon influences our health

Those who buy into spirituality may follow celestial cycles closely, basing their rituals and routines on the movements of the Moon and stars. This connection between daily life and the cosmos is thought to be rooted in ancient religious belief, but new research suggests there may be a scientific basis to our desire to explain worldly phenomena, particularly when it comes to the universe' influence on our own bodies and well-being.

In a study published Wednesday in the journal Science Advances, researchers reveal how our sleep habits may be dramatically altered by the changing phases of the Moon. The scientists made the discovery while studying the differences in sleeping patterns between people living in rural areas of Argentina, and those living in the urban landscape of Seattle, Washington.

From their research, the scientists conclude the Moon may affect sleep duration by more than 90 minutes.

Why it matters — Altering sleep duration by such a large amount of time may be enough to affect how much sleep individuals get overall — and that can have serious knock-on affects on people's health and well-being. Past research suggests there is an optimal amount of sleep — seven hours — so an hour and half of difference is significant.

Leandro Casiraghi is a researcher in the department of biology at the University of Washington and co-author of the study. He tells Inverse he and his colleagues couldn't quite believe their own results.

“We have this previous literature saying this was an actual thing, but we have never seen it in real life so that’s pretty surprising. I’m still kind of amazed we saw this,” Casiraghi says.

What's new — People living in both rural areas with no electricity and urban settings with light pollution show a difference of between 20 minutes and more than 90 minutes in their sleep habits depending on lunar cycle.

This suggests light pollution — the Moon at its full size — is likely not causing the disturbed sleep patterns, the researchers say. Instead, the results suggest human sleep patterns may be synced with a physical element of the lunar cycle — like the Moon’s gravitational pull on the Earth, for example. This is the same force which causes the tides.

Although mythological texts and spiritual practices have for centuries linked human behaviors to celestial cycles, this is the first time scientists have seen evidence of it, Casiraghi says.

How they did it — The researchers analyzed data on the sleep patterns of three rural communities of indigenous Toba (or Qom) people living in the province of Formosa in Argentina, along with the habits of 464 students at the University of Washington in Seattle.

Researchers tracked participants’ sleep habits by having them wear smart watches throughout the entire lunar cycle. The methodology is a departure from previous studies, which evaluated sleep patterns only on the nights when there was a Full Moon or a New Moon, Casiraghi says.

Digging into the details — Casighari recounts to Inverse he and his colleagues were “really surprised” to find specific differences in sleep habits in all groups throughout the month.

Despite the differences in access to electricity, researchers found that all three Toba communities saw differences in their sleep habits, and these synced up with the timing of the lunar cycle.

Specifically: Humans tend to nod off later, and sleep for less time, on nights leading up to the Full Moon.

Depending on the phase of the Moon, the time participants went to sleep at night changed by as little as 20 minutes, to as much as 90 minutes later than baseline.

Conversely, on lightless nights the length of time they slept stretched between 30 minutes and around 90 minutes longer, the study suggests. Participants slept the least during the week leading up to a Full Moon — with the least-restful nights falling between 3 and 5 days prior to the Full Moon. They also went to bed the latest during this time.

Surprisingly for the researchers, the Seattle students also experienced "unexpected" sleep changes — despite living in an area with lots of light pollution.

“I think the one thing that we were extremely surprised to see was that in highly urbanized areas these rhythms are still present in areas where the light pollution is above the level of the Full Moon,” study co-author Horacio de la Iglesia tells Inverse. De la Iglesia is a professor and director of the graduate program in neuroscience at the University of Washington.

“So that part is — at least indirectly — that it may be that the human body is sensitive to maybe other signals from the Moon, like gravitational changes," he says.

What's next — The researchers still need to tease out how much light pollution has to do with these sleep pattern changes. While all the communities involved in this study experienced changes to their sleep, the changes were most significant in individuals who lived in places with the least light pollution, de la Iglesia says.

Casiraghi says it’s hard to pinpoint exactly what is causing the changes — whether they stem from a shift in the body’s biological clock, for example, or if the “sleep process” itself is being affected. More research is needed to answer these questions. He does say, however, the data shows sleep patterns are definitely different depending on the timing of the Moon’s cycle.

Aside from giving credence to the idea the Moon may actually be altering your well-being, the results have a practical takeaway, too.

Knowing how the Moon may affect your sleeping patterns can help you plan your bedtime routine better, too, de la Iglesia says. Good sleep hygiene can go a long way to ensuring a good night's rest.

“I think that being aware that you have a tendency to fall asleep later and to sleep less on the nights that precede Full Moons could be useful — because you could be a little bit proactive on those nights and try to decrease stimulation during the evening, try not to get exposed to brighter lights," he says.

"In other words, do all the things that we should do every night, but do them a little more thoroughly on those nights.”