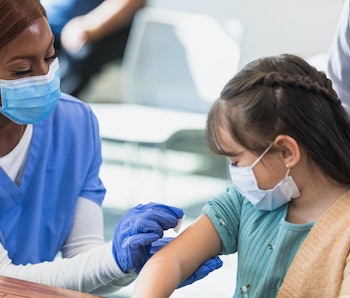 No single protection will control the coronavirus. But if forced to choose just one, it would always be a vaccine. This was recently vindicated after my five-year-old son brought omicron home from school, exposing a household that has been shielded to a greater or lesser extent since 2020.

Thankfully, he was fine after a day or so, we parents were protected by our boosters, and my (then-unvaccinated) nine-year-old daughter somehow escaped. Nevertheless, I felt palpable anger and frustration that my son had been needlessly infected and my vulnerable family exposed.

Needlessly? Well, in my opinion, yes. His school had diligently kept infections to a minimum until the abandonment of mitigations last autumn. But since then — when bubbles were burst and masks cast aside to “avoid disruption” — omicron has cost many more days of school than these measures did previously.

All agree that children attending school should be the priority. Yet this also requires that school is safe and accessible to all. Disruption from Covid isolation and school closures has been profound, yet choosing now to ignore the coronavirus and disbanding protections to improve attendance represents a colossal paradox.

We’re now in a position of near-total reliance on vaccines to safeguard children from Covid while at school — yet they’re unlikely to have the protective impact that we hoped for as things stand.

Debate, delays, and ambiguity around approving Covid vaccines for children have had a negative effect upon uptake. Vaccines were only authorized for 12- to 15-year-olds in the U.K. last fall, despite the health regulator approving them months earlier and other countries moving much quicker to protect millions of adolescents over the summer. In the U.K., the signal was that they weren’t urgent. We’ve also been relentlessly told that Covid in children is of little consequence compared to adults.

It’s not surprising, then, that in this age group the U.K. has managed just 56 percent and 24 percent compliance for first and second doses, respectively. This is exacerbated by inequality, with just 44 percent in more deprived areas having first doses, compared with 74 percent in more affluent regions.

And we’ve seen the same confusion and lack of urgency with vaccines for under-12s. The Joint Committee on Vaccination and Immunisation’s decision on these was slow, noncommittal, and ambiguous.

While finally authorized, vaccines for under-12s aren’t being rolled out until April. Indeed, the health secretary has insisted that the April rollout is “non-urgent,” while JCVI members have said it is equally valid for kids to have the vaccine or not.

The aim is not to tackle omicron but to future-proof childhood immunity against the next generation of variants. But omicron is causing disease and disruption in schools now. Similar to when we get an advisory rather than compulsory notice on, say, our MOT, this lack of urgency will likely breed inaction and possible complacency.

These vaccines have health benefits

Hesitation over authorizing Covid vaccines for 12- to 15-year-olds was partly due to the small risk of them causing heart inflammation (myocarditis), particularly in male adolescents, as seen in other countries. However, the longest gap the U.K. leaves between first and second doses appears to mitigate this risk, and it’s further lessened for under-12s by the lower dose they will receive.

Vaccine-induced myocarditis is also far less common or severe than myocarditis caused by Covid. Nevertheless, when contributing to a news item when vaccines for under-12s were announced, I was struck by how many parents felt vaccinating children was unnecessary or who were uncertain about vaccine safety.

Yes, severe Covid disproportionately affects older and clinically vulnerable people. However, while Covid’s risk to children is smaller, it is magnified greatly when the virus is so prevalent. It’s worth noting that the terrible impact of Covid in the winter of 2020/21, when tens of thousands in the U.K. died from the disease, has probably desensitized some to its impact on the young.

But we should be comparing juvenile Covid with other childhood diseases, rather than adult ones. Children thankfully don’t die very often, yet Covid is currently among their top-five causes of death; 106 certificated Covid deaths occurred in British under-19s during 2021.

Over 9,000 infected English children and adolescents (up to the age of 17) were hospitalized from October 2020 to November 2021. Fewer than half (42 percent) had underlying conditions and only 20 percent were incidental (“with Covid”). Importantly, omicron appears equivalent to the delta in hospitalizing under-18s.

Admissions to pediatric intensive care, either for Covid or pediatric multi-system inflammatory syndrome — a dangerous post-Covid condition that affects multiple organs, including the heart, kidneys, and brain — have also been increasing since September 2021, to around 100 or so a month.

The scale of juvenile infections has also seen knock-on increases in long Covid. Data from the Office for National Statistics show that over 100,000 children with Covid aged between two and 16 have experienced symptoms — such as fatigue and shortness of breath — for over four weeks. Just under 50,000 have experienced symptoms for 12 weeks and a staggering 20,000 for more than 12 months.

Of course, the recent approval of vaccines for under-12s is most welcome. But a change in messaging is desperately needed, and the rollout should be made a priority. Most parents will never be unfortunate enough to experience a child suffering severe illness, but let us use these safe and effective medicines to protect those most precious to us as soon as possible.

Sadly, this is all the more urgent now because of the trend of relaxing restrictions — there has been a 44 percent increase in pediatric deaths from Covid since “Freedom Day” in July 2021. The infections and severe illness that might have been averted by the timely implementation of vaccines before schools restarted in the autumn is hard to predict, but would almost certainly have made an impact on the country’s children.

This is very much for them, not us.

This article was originally published on The Conversation by Stephen Griffin at University of Leeds. Read the original article here.