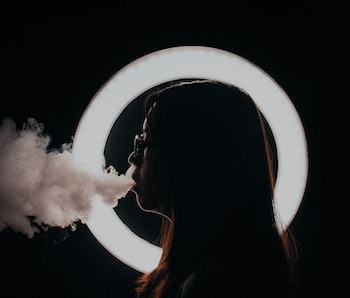 After decades of educational programming and advertising, regular cigarette smoking and sales in the United States have declined to their lowest levels in 50 years. But doctors and parents are now racing to deal with another health crisis that has popped up in its place: the meteoric rise of electronic cigarettes (or e-cigarettes) among adolescents.

This nicotine electronic delivery device was originally introduced to the market as a promising tool to aid smoking cessation among already current smokers. Yet, the lack of federal regulations, the appealing flavors available, and perceptions that these devices were less harmful than regular cigarettes have led to a worrying spike in use among US adolescents. One in five US high school students and one in 20 middle school students currently use e-cigarettes.

US Surgeon General Jerome Adams has declared e-cigarettes an epidemic among youth, stressing that e-cigarette aerosols containing nicotine increase the risk of addiction to nicotine and other drugs, and impact brain development which can induce mood disorders and lower impulse control. Now, new research led by Dr. Bader Chaarani of the University of Vermont and published in the journal Biological Psychiatry: Cognitive Neuroscience and Neuroimaging has found adolescents that smoked only a few cigarettes had smaller and less connected brain areas than their peers who never smoked. This could mean that adolescent smokers’ brains will develop and function differently, which may affect decision-making and self-control in adulthood.

Just like regular cigarettes, e-cigarettes contain nicotine, a neuroactive chemical and an addictive component whose main target is the brain. Nicotine acts upon receptors in our brains through nicotinic acetylcholine receptors (nAChRs) to promote the release of a neurotransmitter called dopamine. Dopamine is a feel-good chemical, triggering a pleasurable response in our brains. When linked with the action of smoking, it plays a fundamental role in nicotine addiction.

"Adolescence is a vulnerable developmental period during which exposure to nicotine can fundamentally alter how the brain is wired.

Nicotine exposure among adults presents lower risks compared to adolescents. This is because our brains develop throughout our first three decades of life. During this maturation period, the brain circuits are being remodeled, especially those involved in reward function (dopamine) and cognitive function (acetylcholine). Therefore, adolescence is a vulnerable developmental period during which exposure to nicotine can fundamentally alter how the brain is wired, making young people even more vulnerable to future addiction.

One big gap in research observing the effects of cigarette smoking on brain volume, connectivity, and function to date is that such studies have been mostly performed on adult smokers rather than adolescent smokers. The majority have also focused on daily and heavy smokers, yet have overlooked occasional smokers, which is relevant due to common experimentation behaviors during adolescence.

The new research by Dr. Chaarani and their team finally addresses these gaps by looking at the brains of adolescent light smokers. They found that just a couple of cigarette puffs can potentially alter the development of adolescent brain.

The research team recruited over 600 14-year-old adolescents and calculated a cigarette-smoking score for each participant based on how many times, during their lifetime, they had smoked cigarettes. Participants ranged from young people who had never smoked to those who have smoked more than 40 times.

"Smoking even a few times is significantly linked to a decreased volume of the gray matter and neuronal connectivity.

The researchers also looked at the brain of each of the participants using two types of magnetic resonance imaging (MRI). These images were used to estimate the brain gray matter volume corresponding to the neuron bodies where synapses occur, and white matter connectivity, meaning the “telephone wires” that connect neurons and brain areas by carrying electrical signals.

Interestingly, Dr. Chaarani and their team found that smoking even a few times was significantly linked to a decreased volume of the gray matter and neuronal connectivity. And the more teens smoked, the more the gray matter volume at the ventromedial prefrontal cortex (vmPFC), and the connectivity at the corpus callosum of their brains was reduced. Scientists have previously linked alterations in the vmPFC volume with a reduction in reward

Moreover, reduction in the connectivity could indicate that nicotine induces axonal damage, meaning it may be altering the communication between brain areas. These alterations in brain connection have also been reported in individuals with substance addiction and alcohol dependence. While the research only showed a link between low doses of cigarette smoking and brain alterations, rather than a causal effect, these type of consequences have been consistently reported in many studies on brains of adult smokers.

Although this study focused on adolescents who smoked traditional cigarettes, scientists have demonstrated that such risks are applicable to teenagers who vape using the popular JUUL brand of e-cigarettes since the two methods deliver similar amounts of nicotine.

Researchers are still working to understand the impact of nicotine in the brain of young smokers, particularly now that e-cigarette use among youth has increased rapidly. This new study could play a critical role in educational campaigns, and spur regulatory agencies, parents, and teachers to take an active role in preventing this newest addiction.