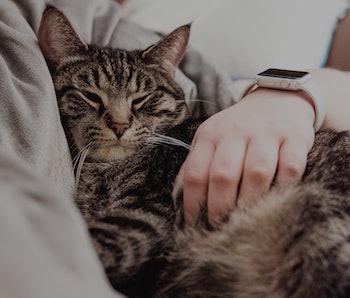 The advent of small, energy efficient, and affordable trackers and apps has enabled us to quantify a large proportion of our daily lives, for better or worse. This increasing obsession with quantification is being identified as a problem in its own right by sleep experts, but the fascination should come as no surprise.

As we’re reminded daily by magazines, television, and health campaigns, we are not getting enough sleep as a society. The aims of those reminders are admirable. Sleep difficulties are costly to society and influence more than just our desire to reach desperately for a cup of coffee in the morning.

However, this fascination can backfire — our infatuation with sleep trackers may be harming rather than improving our sleep.

Apps and technology that track sleep take many forms. Typically, these will rely on a mixture of movement and heart rate data to assess a myriad of sleep statistics. However, these trackers and apps rely on best guesses at what’s happening while you lie in bed, and they pale in comparison to the gold-standard sleep laboratory setup, which combines brain imaging, eye movement, breathing, muscle and skeletal movement, and heart rate data to give an accurate assessment of sleep.

Nonetheless, we still find ourselves marveling that we got two percent extra REM sleep or deep sleep the previous night. On the surface this may seem harmless, but it can also prime us to be dissatisfied with our sleep when there is no reason to be.

A series of studies in 2014, conducted by Christina Draganich and Kristi Erdal at Colorado College, highlighted this point powerfully. They primed a group of students on the “right” amount of REM sleep, telling them that 25 percent of the night spent in REM was good, more was better, and less would be detrimental for daytime functioning. The participants were then told that their REM sleep from the previous night could be calculated there and then. Shortly after being hooked up to the device, which appeared to — but did not — measure brain activity and heart rate, they were told they either had below (16.2 percent) or above average (28.7 percent) time spent in REM. The participants reported their own sleep quality from the previous night (rated as 1-10, from poor to brilliant) and completed tasks assessing daytime functioning.

Across both studies, they found that self-reported sleep was not associated with performance on any of the tasks. Instead, it was the assignment to fake high or low REM group which showed an effect on performance. Those in the low REM condition performed poorer on attention and speed of processing — symptoms akin to those seen after a bad night’s sleep. This was replicated in a subsequent study which accounted for potential bias from the participant (e.g. the participants working out the aims of the study) or the experimenter unconsciously guiding the participants’ behavior.

"The studies showed an effect on day-to-day functioning, based purely on suggestion.

A similar finding was also seen in those with insomnia. Christina Semler and Allison Harvey, at the University of Oxford, showed in 2005 that simply telling participants their sleep was poor, regardless of the actual sleep quality, was sufficient to produce daytime impairments.

Together, these studies showed a negative effect on day-to-day functioning, based purely on suggestion that they were sleeping poorly. These findings are not confined to the lab, but can also be seen in the clinic. Kelly Glazer Baron, based at Rush University Medical College in Chicago, recently highlighted that people are increasingly using sleep-tracking devices to self-diagnose sleep problems. In theory, this shouldn’t be a problem, since health tracking should help us learn more about our own habits, but we should also take them with a healthy dose of skepticism. When someone’s quality of sleep is intrinsically linked to their sleep devices, such as the patient in Baron’s report who was quoted as feeling “pressure every night to ensure his tracker would display at least eight hours of sleep,” this can create the problems seen in the experimental studies.

By being primed to think we are not getting enough sleep, we can manifest the symptoms of poor daytime functioning along with the conviction that our sleep is problematic, even when it’s not.

The Dark of Sleep

Our increasing reliance on sleep trackers falls into another pitfall when we consider the limits of what we know about sleep. As soon as I tell people that I’m a sleep researcher, I’m usually bombarded with questions like “How much do we need?” and “Why do we need to sleep?” — along with an expectation that I can provide a single time and a clear answer.

The truth is we are still very much in the dark when it comes to the “why” and only have a very broad idea for the “how much.” The sleep community typically recommends “seven to nine hours sleep a night” to combat the short- and long-term negative effects of too little or too imuch sleep. This population-level advice ignores that some people are naturally short or long sleepers.

"What should concern us are unrealistic beliefs about devices.

To answer why we need sleep would mean diving into a series of articles, but to summarize, we know it’s important for our mental and physical health, it seems to be important for memory, and it tends to be disturbed across a range of psychiatric and physical health conditions. We don’t know what the optimum amount of deep sleep or REM sleep is beyond the average values seen in large samples of people. Tracking the amount of deep or REM sleep with no frame of reference is somewhat useless and, as we’ve seen above, potentially harmful.

Sleep tracking technology itself is not inherently problematic. What should concern us are unrealistic beliefs about what such devices can tell us, and about how much (and what type) of sleep we should be getting. Our expectations about sleep are an important component of a good night’s rest, and creating false and negative beliefs, through the uninformed use of sleep trackers may create kindling for sleepless nights.

If we are to have a healthy relationship with sleep, we need to acknowledge the limitations of what physicians and scientists currently know, and of what sleep trackers can tell us. An app or watch gives us the opportunity to efficiently squeeze an extra one percent out of sleep — and this can be fine, or even a useful way to improve our sleep in the future. But for now, however appealing it might seem to quantify our sleep, we need to be aware of the potential problems they can cause, too. Perhaps if we really want to improve society’s sleep we should focus less on what our iPhones are telling us and more on our own experiences. Maybe then we’ll start to give ourselves the amount of sleep our bodies deserve.