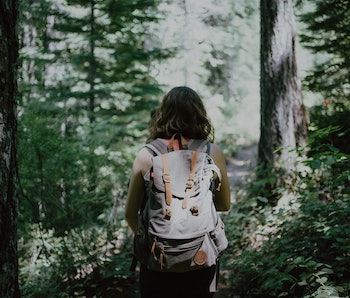 Murray Hidary is a composer, pianist, and creator of a powerful immersive musical experience called MindTravel. Hidary is currently on a 21-city tour with MindTravel called Silent Hike.

Silent Hikes are guided meditative walks through parks and gardens that Hidary narrates through headphones that each participant wears. After a short introduction, hikers are “enveloped in the transcendent sounds of the beautiful, original MindTravel compositions” — Hidary’s own. The improvisational piano soundtrack is meant to help amplify the sense of “freedom and expansiveness” that being in nature inspires.

I attended Hidary’s Silent Hike in Brooklyn, during which he said the process brings “music into your life as ritual.” He chatted with me over the phone from Detroit, the next stop on his tour.

When you encounter certain hurdles, like anxiety or stress, do you find yourself turning to music?

I do. I’ve used music, in particular the music I create, to get through some of the most difficult times in my own life. I’ve been through some of the most difficult grief someone can go through, and I turn to music to heal because music is a language. To me, it’s a language of emotion — words leave, and music takes off. It’s a multidimensional language, whereas typical language is linear.

But it’s not about turning to music as a crutch. It’s also realizing that, and I often talk about this on the walks, is that everything around us is music. Everything has an interconnected harmonic nature to it, and once one starts to see that in the world, it’s easier to observe that there’s something grand happening. This helps me not get stuck in the rut of one moment, because you realize it’s just one temporary bump in the road.

How do you get to that space where you’re experiencing everything as music? Does it come down to taking the time for quiet and contemplation?

Yes. It’s a muscle that we have to build. If you want to be in physical shape, you go to the gym and you don’t go just once. It’s the same thing with our emotional and spiritual wellbeing. It’s not a one time thing. Yes, you can, for example, come to a MindTravel experience once, and feel uplifted but you have to maintain that. It’s about building muscle that allows you to reflect and create space whenever you need it.

Now, space is a relative term, right? In society we say “sleep on it and you’ll have a new perspective in the morning.” But sometimes you don’t have time to sleep on it. You need to react right away. So the space you need to build can be relative and reactive to your experiences.

Lately I’ve gotten a sense that Americans are paying more attention to the act of meditation. Do you think there’s something particular about this time we’re in that is influencing people to embrace the practice?

I don’t think that this is just happening in the U.S. I’ve taken MindTravel to countries across Europe and the Middle East, and in each place I’ve seen the same appetite and yearning for this type of experience. I think that meditation provides people the opportunity for deep reflection, and in a more and more digitally distracted world, people are longing for that. We’re pulled in so many different directions with our busy lives, and I think people are really looking for a repreive from that.

I also believe that here in the U.S., as well as in other countries, we’re operating in an atmosphere full of polarizing and divisive energy. That sometimes causes people to be torn in a way that is incredibly stressful and can produce a tremendous amount of anxiety. That’s not just on a national level, but could be happening at home. I think people are looking for a way to balance that conflict and find a safe space to reflect.

Are there any particular philosophies or teachings that inform your take on mediation?

When I was younger I got to travel extensively, and during that time I was in a deep exploration of Eastern philosophies and ideas. I spent a lot of time living and staying in Zen monasteries both in Japan and in the United States. I’ve infused, incorporated, and have been influenced by a variety of traditions, but especially so by the Zen Buddhist tradition. Particularly, the teachings of Thich Nhat Hanh have been a great inspiration.

How do the Silent Hikes vary on the tour?

I curate different music for different cities, depending on the kind of route and stops that we do. Each has its own unique flavor and personality. What I say throughout the hike is improvised based on the landscape that we’re in.

Sometimes it’s a wonderful sky with certain colors that opens up for discussion. And sometimes it’s something quite different. For example, we were in Toronto yesterday and there was a huge Drake concert happening probably a half mile away but it was so loud that we all heard it during the hike. So I incorporated that and said, well you know, we have to control our own internal state no matter what’s happening on the outside. That links to this notion of radical responsibility — we’re in control of our own emotional and mental state, no matter what’s happening around us.

So it could be that or you know, we’re passing a little family of ducklings. Each location presents its own unique, wonderful moments.

Was there an aha moment that lead you to create MindTravel?

This has been an evolving practice, and it includes personal rituals that I’ve used since I was in college training to become a classical composer at New York University. At that time I was beginning my journey into Eastern philosophy, and deeply involved in my Western classical music training. Those two came together and became a way for me to try to understand myself and the world around me.

I would sit at the piano every day, for an hour to three hours, and use it as a way to explore myself and my different levels of consciousness. That is how I became so deep into this. It wasn’t until after the death of my sister that I used this practice in such a way that it affected me profoundly. It offered a way to heal, as well as try to make sense of my feelings and move forward with my life.

After that, I knew that I needed to share this with people and what I do now is an evolution of all of that. It’s not just a coping mechanism for difficult times, but it’s a way to connect with the joys of life. I hope that it offers a way for people to tap into their truest self.