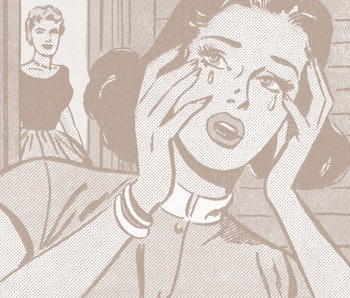 While the silver linings of the coronavirus pandemic appear to be few, a seemingly obvious one is the eradication of FOMO.

Shorthand for “fear of missing out,” the phrase triggers thoughts of situations like seeing aspirational photographs on Instagram or hearing of a social event you weren’t invited to. Feeling left out should be one thing we don’t have to worry about during the Covid-19 lockdown.

But some people are still feeling FOMO, mental health experts report. Posted photos still make us jealous, and there’s the new pressure of not canceling on digital events for fear you’ll miss out on the few social options out there. Meanwhile, certain areas of the world are slowly but surely opening back up, and seeing friends share pictures hanging out can make you feel blue if you’re still home.

According to new research, there is a way to combat the sensation: self-compassion.

According to a study published in August in the Journal of Social and Personal Relationships, FOMO is not necessarily a social media-specific problem or just an issue for young people. Instead, it has to do with aspects of self-perception, especially loneliness, low self-esteem, and low self-compassion.

Study co-author Chris Barry is a psychology professor at Washington State University. He tells me that while these three traits were related to experiencing FOMO, “we don’t really know which of those develops first.”

“I like to focus on self-compassion because that might be a relevant point of intervention -- something we can work on more easily than, say, self-esteem,” Barry says.

Barry and co-author Megan Wong, a WSU undergraduate student, surveyed 400 people across the US between the ages of 14 and 47, asking them questions relating to social media use, life satisfaction, and self-perception. They found that, contrary to earlier speculation, social media was a poor predictor of FOMO. They also found FOMO was, on average, equivalent across the age groups. This came as a surprise; they had hypothesized it would be highest among the youngest group and decrease with age.

Barry notes that, while speculative, these findings do suggest there are ways to reduce FOMO and increase self-compassion. These include:

FOMO, in turn, can be an exercise in transforming personal setbacks into moments of self-growth. Of course, that’s easier said than done. Nothing stings quite the same as feeling you’re not up to par. Still, the focus on negative aspects of the self is the issue. Barry says if one feels left out, even if it relates back to something one doesn’t even actually want to do, it increasingly becomes a problem the more it’s framed as an issue of being rejected or disliked as a person.

If the pandemic has actually reduced your FOMO, good for you. Now the goal is to keep it that way.

“One silver-lining, anecdotally, is that when we step away from a Zoom meeting, online school, etcetera, we may be more mindful of our present surroundings on purpose,” Barry says. “In my opinion, we should allow ourselves those moments during and after the pandemic.”