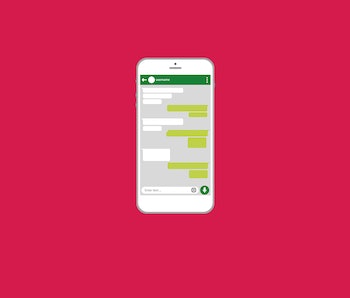 Fake news, a problem that seemed to be waning after it first burst into the 2016 news cycle, has made a huge comeback during the global coronavirus pandemic. There are few breeding grounds for the crisis more fertile than the messaging app WhatsApp, where unsuspecting users are inundated with messages promising that ibuprofen can cure Covid-19, among other lies.

The Poynter Institute, which is dedicated to reporting on the media, is now trying to stalk the predator on its home turf with a WhatsApp chatbot that can tell users if a story is fake news -- or the real deal.

How big is the problem? — More than two billion people use WhatsApp across the world, and is particularly popular in India, where it has over 340 million users. It has nearly 100 million Brazilian users, and just under 70 million in the United States.

Users in those first two countries have been victims to fake news scandals on WhatsApp in the past: tens of thousands of messages spread fake stories about then-candidate, now-current Brazilian President Jair Bolsonaro in 2018. Indian authorities have been plagued by WhatsApp during recent elections, and now, with fake cures being disseminated for coronavirus at double the pre-pandemic rate of spread.

Outsourced — WhatsApp, which was founded in 2009 and bought by Facebook in 2014, is now trying to outsource its fight against the problem. On March 18, as the scope of the coronavirus pandemic was making itself felt, the Facebook subsidiary announced a $1 million grant given to the Poynter Institute’s International Fact-Checking Network (IFCN).

Now, the IFCN is showing what it’s done with that money.

“Hundreds of millions of users rely on WhatsApp to stay in touch with their friends and families every day,” says IFCN director Baybars Orsek, speaking in a press statement. “Since bad actors use every single platform to disseminate falsehoods, to mislead others during such troubling times, fact-checkers’ work is more important than ever.”

How add it to WhatsApp — The chatbot, which is currently only available in English, is easy to access. WhatsApp users simply have to add +1 (727) 2912606 as a contact number and text “hi” to start. There's also this link: http://poy.nu/ifcnbot.

The chatbot will be based on research that the IFCN staff has already started. Fact-checkers from 74 countries have found more than 4,000 pieces of misinformation being shared around the Internet, broken into twenty-six different categories. The stories run the gamut, ranging from claims that homeopathy can cure Covid-19 to Michigan Governor Gretchen Whitmer banning the sales of American flags.

The chatbot is built with Turn.io’s architecture. Gustav Praekelt, co-founder of Turn.io, said in a press statement that “because many of the details around Covid-19 are still unknown, it makes the challenge even greater as viral speculation can easily overwhelm the accurate information we do have. Providing this service in collaboration with WhatsApp and IFCN provides an invaluable service to countries, communities and citizens in real-time and at scale.”

The Inverse Analysis— As with several attempts to fight fake news, this chatbot will only be as effective as the users who seek out further information. After years of lax supervision, social media companies have become more aggressive in pointing out what is true and what is not, but those already comfortable in the pattern of believing unreliable sources tend to stick with them. Time will tell if this chatbot can help break the cycle.