don't call it a comeback

After 10,000 years of extinction, this is when woolly mammoths will walk the Earth again

“You're never going to bring back an extinct creature.” 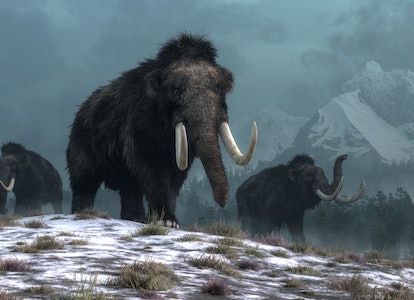 It has been more than 10,000 years since the last fur-covered woolly mammoth feet lumbered across the Arctic tundra.

Once a keystone species of these frozen ecosystems, the legacy of mammoths now has to be painstakingly recovered from layers of ice and permafrost by anorak-clad scientists. But not for much longer.

On September 13, entrepreneur Ben Lamm and Harvard geneticist George Church announced the creation of Colossal, a new gene-editing company bent on “de-extincting” the woolly using CRISPR. The company claims that rewilding of this species in the Arctic tundra could revitalize the region's grasslands as a major source of carbon sequestration, which offers a crucial tool in the fight against climate change.

“It isn't de-extinction at all.”

With starting capital of $15 million and four-to-six years of research, Lamm tells Inverse the company could produce a “herd” of woolly mammoths calves for the first time since the Ice Age. This means the first baby mammoths could roam the tundra by 2027 or earlier.

But other scientists aren’t so convinced, including Tori Herridge, an evolutionary biologist working as a fellow at the Natural History Museum in London and science communicator. Before the company’s announcement, Herridge was approached to join Colossal’s advisory board but declined.

Herridge tells Inverse that this project could easily blow past some crucial ethical barriers if Colossal isn't careful.

“If [this technology] genuinely does what they hope it's going to do, that will fundamentally alter the way that we as humans interact with the natural world,” says Herridge.

And there’s another issue: it may not be a true mammoth at all.

Using cutting-edge technology to bring a species back from extinction might sound like Jurassic Park-level science fiction, but Colossal’s new project is actually not the first to attempt — or achieve this.

“Colossal is ready to chart this new frontier of science and biotechnology.”

While the company’s use of CRISPR — a gene-editing tool that can snip and replace particular genes in an animal's DNA — is relatively novel, Herridge says that scientists accomplished small-level “de-extinction” years ago through cloning a recently extinct Pyrenean ibex.

Another secret weapon in their corner, according to Lamm, is geneticist and co-founder George Church. With a passionate interest in the woolly mammoth, a deep understanding of synthetic biology, and eight years of research on the topic under his belt, Church is a triple threat. Mix that expertise with $15 million, and Lamm is confident they’ve got a winning combination.

“De-extinction of the woolly mammoth will be the first time a species has been successfully brought back from extinction,” Lamm says. “Colossal is ready to chart this new frontier of science and biotechnology.”

Are we really bringing back the mammoth?

While CRISPR technology can do miraculous things, Herridge warns that it is still by no means a time machine.

“It isn't de-extinction at all — you're never going to bring back an extinct creature,” says Herridge. “It is not the de-extinction of the mammoth; it is the genetic modification of an elephant you are creating an entirely new synthetic organism.”

Instead of reintroducing so-called authentic woolly mammoths to the tundra, Herridge says that what Church and his team are really doing is tinkering with the DNA of modern-day elephants to create something very similar to a woolly mammoth.

To do this, Church’s team has isolated 60 genes that helped woolly mammoths adapt to cold environments, including developing a shaggy coat, growing smaller ears and tail, and producing extra body fat.

“Electrical pulses are applied to the egg cell, which will simulate fertilization, and the egg cell will start to divide and grow, becoming an embryo,” says Lamm. Such future embryos could then be implanted in a surrogate elephant or an artificial womb for their 18-22 months-long gestation.

How it could go wrong — But before we get there, Herridge says there’s still a lot that could go wrong along the way. For example, reintroducing species to their native environments without disrupting those ecosystems is tricky even with modern species, but rewilding a species that’s been gone as long as the woolly mammoth could be the most difficult yet — not to mention that the environment they’re being reintroduced to is rapidly changing as temperatures across the world rise.

But while these are points to consider carefully, Herridge says there’s an even more salient ethical issue that this project must keep in mind.

“The worst outcome for me in the short term would be a sort of gung ho approach to implantation and uses elephants as surrogates,” says Herridge.

According to Herridge, the only way to find out if you’ve done the right tinkering to create a “mammoth,” instead of an animal that might have several abnormalities or deformities, would be to see what kind of calf it creates. In that case, jumping to surrogacy too quickly without significant lab-bench experimentation first would be “unethical,” she says.

One way to get this right is to increase transparency wherever possible, says Herridge. This means releasing data from the Church lab more readily than has been done so far, she says.

How it could go right — Despite her concerns, Herridge is still optimistic about what we might learn along the way to producing baby woolly mammoths — whether we ever get there or not.

“The best outcome would be amazing collateral advances in our knowledge about mammoths and the ice age ecosystem [and] the application of those biotechnology tools to really press conservation issues for species that are close to extinction today,” says Herridge. “That's what I think would be the most important stuff.”