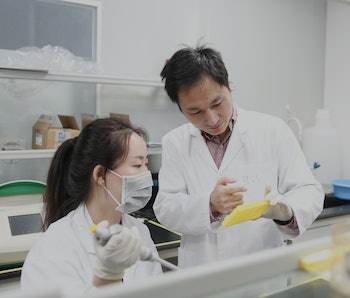 One of the most striking science stories of 2019 has come to an end: He Jiankui, the Chinese scientist who controversially created the world’s first gene-edited babies in late 2018 has been sentenced to three years in prison, and given a $430,000 fine.

In November 2018, He made international news when he announced that he had used the genetic editing tool, CRISPR, to manipulate the genomes of two twin girls who were born that year. He claimed to have made small changes to a gene that would, in theory, make the girls resistant to HIV.

Scientists widely condemned his work and his saga has led to a series of public meetings, scientific conferences, and debate as to how China would handle this serious breach in medical ethics.

Shortly after announcing the birth of the twin girls, Jiankui was fired from his post at Southern University of Science and Technology in Shenzhen. He briefly went missing in December 2018, and after resurfacing was reportedly being kept under house arrest.

He’s trial, conducted in Shenzhen, has been closed to the public. But on Sunday, China’s state-run news agency, Xinhua announced that a court in Shenzhen found He guilty of conducting “illegal medical practices.” Two of his colleagues, Zhang Renli and Qin Jinzhou will also serve prison terms of two years and one year and six months respectively.

Why is He Jiankui going to prison?

He’s experimentation sparked outcry because he waded into the murkiest ethical territory in gene-editing. He edited the genomes of two healthy unborn children. To add to that, edited germline cells, which means that his changes will be passed down to any descendants of the “CRISPR babies.” The fact he didn’t know the outcome of his experiments, on humans, makes his work undeniably unethical.

When He conducted his experiments in 2018 and 2019, editing the genomes in human embryos that were intended to be implanted was prohibited, though there were no actual penalties in place. According to Xinhua, the court’s ruling suggests that He conducted “illegal medical practices.” However, the article in the Chinese criminal code that mirrors that statement doesn’t mention editing human embryos for implantation (the word embryo isn’t present in the code either). Instead, it states:

“Whoever, without obtaining the qualification for practicing medicine, unlawfully practices medicine, if the circumstances are serious, shall be sentenced to fixed-term imprisonment of not more than three years, criminal detention or public surveillance and shall also, or shall only, be fined…”

Still, the Chinese government did declare Jiankui’s experiment illegal following an investigation. A Xinhua report in January 2019 alleged that He conspired to “evade supervision,” “organize relevant personnel privately,” and “carry out human embryo gene editing activities for reproduction purposes that are explicitly prohibited by the state.”

How did Jiankui’s experiments change gene-editing in 2019?

Jiankui’s experiments may have earned him a prison sentence, but they’ve earned him an indelible place in medical history. Jiankui was a member of the Time’s 100 Most Influential People and Nature’s list of 10 scientists who mattered this year.

As outrageous as they are, the experiments by He highlight just how much we have to learn about germline gene-editing and forced the world to really grapple with the implications of a scientist gone rogue.

As details of the “CRISPR babies” experiment became public, it was clear that this specific genetic mutation could actually increase the likelihood of getting other illnesses. And, CRISPR is far from a perfect way to tinker with a genome: only one of the twins even ended up with a genetic change anyway.

Since then, 18 scientists from seven countries have called for a moratorium on germline editing for at least five years, as has the Nuffield Council for Bioethics in the United Kingdom. That proposed five-year ban isn’t permanent but should be long enough for scientists to establish an “international framework” for regulation human germline editing.

But statements like that, at their core, are just suggestions. Research into human genome editing has plowed forward anyway — but through more legitimate channels than those used by He.

Russian scientist Denis Rebrikov outlined his plans to investigate how CRISPR could be used to prevent deafness. However, this experiment different from Jiankui’s in two crucial ways. He has repordely received approval to conduct experiments in human embryos, and those embryos are not intended to be implanted. Unlike He who did his experiment in secret, Rebrikov plans to share his progress with the scientific community:

“I have no problems in communication with researchers and regulators concerning my research,” he told Nature.

He will probably never conduct research of this kind ever again himself, Xinhua reports that he will be “blacklisted” from performing assisted reproduction techniques for life. But those who conduct this kind of research going forward, are unlikely to ever forget his name or his fate.