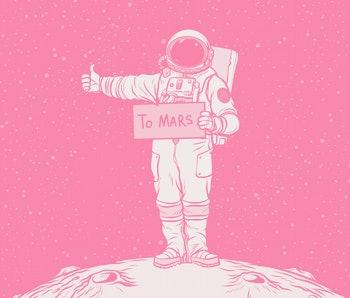 Even at the best of times, booking travel can be a stressful experience. With different prices for flights, hotels, and experiences scattered throughout the internet, it can be hard to know the difference between getting a good deal or getting scammed.

This headache is bad enough on Earth, but getting stranded at your interstellar layover on the way to your summer-home on the lunar surface is another thing entirely. To ease the minds of eager space tourists, Virgin Galatic is harkening back to an older, more dignified way of vacationing: the travel agent.

By signing a new NASA contract, the spaceflight company Virgin Galactic -- not the be confused with Virgin Orbit, which is a similarly named by totally different thing -- has signed up to offer traditional travel agent services to galactic tourists looking to fly to the ISS.

On Monday, Virgin Galactic signed a Space Act Agreement with NASA to "encourage commercial participation in orbital human spaceflight to the International Space Station (“ISS”)" advance interest in Low Earth Orbit flights (an area of space that includes the ISS.) This is a change of tune for Virgin, which has previously flown its spaceplane, VSS Unity, slightly lower in the atmosphere for suborbital flights.

A large part of Virgin Galactic's new role in encouraging space tourism at these levels will be in the development of a new astronaut training program. Different from a NASA astronaut training program, in which astronauts go through rigorous physical, technical and mental training, Virgin's astronaut "readiness program" will instead focus on procuring both interested space tourists as well as their transportation for orbital flight to the ISS.

About the new partnership, Virgin Galactic's CEO, George Whitesides, said in a statement he was excited about how this agreement could help build the economy of commercial spaceflights.

"We are excited to partner with NASA on this private orbital spaceflight program, which will not only allow us to use our spaceflight platform, but also offer our space training infrastructure to NASA and other agencies," said Whitesides. "Based on the unsurpassed levels of spaceflight customer commitments we have secured to date, we are proud to share that insight in helping to grow another market for the new space economy. We want to bring the planetary perspective to many thousands of people.”

The agreement also says that Virgin will provide "on-orbit resources, and ground resources" to its travelers, but did not return Inverse's request for comment on exactly what those resources might be by the time of this article's publication.

In Virgin's announcement, NASA says that these private spaceflights to the ISS, called "astronaut experiences," could range from vacations for private citizens to government-sanctioned research missions.

While Virgin's role in space tourism hasn't quite taken off the way it has for competitors like SpaceX, the company writes in its statement that it can bring "unparalleled" expertise in the development of private spaceflight training programs. This claim is supported by Virgin's launch of a very similar program in 2019 in partnership with Under Armour to prepare future Virgin Galactic astronauts for the physical and mental tolls of space travel -- and of course for how cool they'd look in their custom spacesuits

At the time of that announcement, Whitesides said it was an exciting step toward a true commercial experience in spaceflight.

"Introducing our Astronaut Readiness Program to our first customers marks an exciting point in our journey as we move closer to the start of commercial service," said Whiteside in the 2019 statement. "It is an important step in the process to ensure that our customers are prepared and equipped with the knowledge and training that will help ensure that they savour every second of their spaceflight which we hope will go beyond expectations."

How exactly Virgin will merge this previous program under its new agreement with NASA still remains to be seen, but if a 20 percent jump in Virgin Galactic's stock is any indication, the final frontier could be in reach.

More like this
Innovation
6.15.2022 9:00 PM
Vulcan vs. Atlas V: What you need to know about the ULA's next mega-rocket
By Harry Stoltz
Science
19 hours ago
Virgin Orbit targets June launch window for U.S. Space Force collaboration
By Doris Elín Urrutia
Science
6.16.2022 10:00 AM
10 years ago, China docked to its space station — and changed the space race forever
By Doris Elín Urrutia
Related Tags
Share: