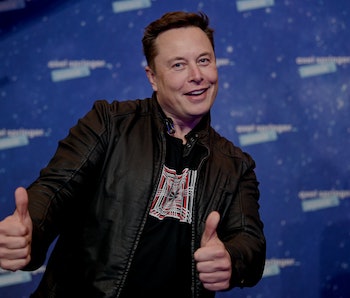 Room for one more?

On Sunday, Richard Branson beat his billionaire rivals to space when he soared on the first fully-crewed flight from Virgin Galactic.

With this flight, Branson managed to fly to space before Blue Origin founder Jeff Bezos (due to fly on a crewed mission July 20) and SpaceX founder Elon Musk. But over the weekend, reports emerged that Musk had already bought his own Virgin Galactic ticket.

“Elon Musk has a Galactic ticket,” Will Whitehorn, president of the company from 2004 to 2010, told Forbes. “I know because I sold it to him.”

Whitehorn claims Musk bought the ticket in 2006 when the advertised price was $250,000. The Wall Street Journal also claims that Musk purchased a ticket, citing a spokesperson. Musk has not verified how much he paid, and Virgin Galactic did not respond to an Inverse request for comment ahead of publication.

The report highlights how the new space race has transformed over the past two decades. All three firms — Blue Origin, SpaceX, Virgin Galactic — were founded in the early 2000s with the promise of opening space to more people. Few could have predicted how the new race emerged over that time — which company would get there first, and who would have to hitch a ride on someone else's ship.

Want to find out more about the emergent new space race, and competitors like SpaceX and Blue Origin? Subscribe to MUSK READS+ for exclusive interviews and analysis about spaceflight, electric cars, and more.

Why did Elon Musk buy a Virgin Galactic ticket?

Nobody knows for sure why Musk bought the ticket, and he’s not yet made a public statement about it. He did, however, show his support for Branson by attending this month’s crewed flight.

It’s important to note that in 2006, the space race looked very different.

SpaceX was founded in 2002 and quickly set to work on its first rocket. The Falcon 1 was an orbital rocket designed to prove the company’s potential and pave the way for its more ambitious plans. It failed its first launch in March 2006: It wouldn’t be until the fourth launch in September 2008 that the Falcon 1 would complete a mission.

It’s hard to imagine now, but SpaceX had a shaky start. By 2008, a year Musk later described as his worst, SpaceX had “virtually no money,” per Musk. The company's transformation over the years, to the point where it launched 26 rockets to orbit last year, has been remarkable.

Musk was someone with big ideas about space. Before founding SpaceX, Musk explored the idea of sending plants or mice to Mars. Bloomberg detailed his early meetings with the Mars Society in 2001, where he unexpectedly donated $5,000 to a group of people excited about colonizing the red planet.

As Musk is establishing SpaceX and dreaming about the potential, emerges Virgin Galactic. Branson founded the firm in 2004, immediately sparking major headlines.

"We hope to create thousands of astronauts over the next few years and bring alive their dream of seeing the majestic beauty of our planet from above, the stars in all their glory and the amazing sensation of weightlessness,” Branson said in 2004. "The development will also allow every country in the world to have their own astronauts rather than the privileged few."

In December 2005, the firm announced the first 100 space tourists that would each pay $200,000 for a ride on the firm’s ship. The ship wasn’t built yet, but construction was expected to start in early 2006. Passengers would fly as soon as late 2008.

The Inverse analysis — Of course, Virgin Galactic has missed that deadline by at least 13 years. But for a space enthusiast tech entrepreneur, keen to get involved as much as possible, it’s easy to see why you’d want a ride on a human-rated suborbital spaceship.

It’s also hard to describe the two as rivals at the time when Musk reportedly bought the flight. Where SpaceX was trying to launch cargo into orbit, Virgin Galactic was happy to send people on a short trip to what some people say doesn’t even count as space.

It was a tough time for Musk as he worked to make his rocket company a success. As a newcomer on the scene, it’s understandable why the entrepreneur bought his own ticket — even if he eventually plans to double-dip into space with a trip to Mars.