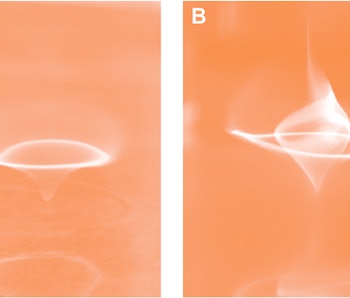 Fire may be one of humanity's original innovations, but it is still surprising us hundreds of centuries after the first manmade flames.

In 2016 scientists at the University of Maryland stumbled upon an entirely new type of flame while investigating the use of fire whirls to clean oil spills in water. Initially, the flame began as a large, violent, yellow flame — then unexpectantly transitioned into a small, quiet, spinning blue flame.

They dubbed it a "blue whirl" for the way it twisted and spun. But this whirl was more than beautiful — it also burned soot-free.

Four years later, a new study confirms the blue whirl is unique and indicates the flame could be very useful in the pursuit of clean fuel consumption.

"This flame has the potential to be used as an ideal energy source with reduced pollution and reduced complexity," the study team told Inverse by email. "It is usually a very difficult process to burn liquid hydrocarbon fuels in a clean way with no soot production. The blue whirl can burn many different types of liquid hydrocarbon fuels without producing harmful soot, all within the same and simple configuration."

These findings were published on Wednesday in Science Advances.

While blue whirls are described as tame and stable, the scientists observed that, initially, they pass through a "noisy, turbulent, yellow fire whirl" stage. The study team notes that this turbulence caused previous experimental attempts to wrangle this flame to be tricky. That's why, in this case, they decided to model it from a safe distance using computer simulations.

In the future, further controlled simulations could help answer fundamental questions like whether or not these blue whirls are scalable and if they can be created without passing through their unruly fire state, the team writes.

This video compares the numerical simulation (center) to two experimental visualizations of the blue whirl.

In order to accurately recreate this blue whirl in the digital world, the researchers first had to simulate the same parameters used in the lab, such as the geometry of the air and gas flow. From there, they could tweak different inputs to see how different environments would affect the emergence and stability of this blue flame.

While some of the experimental and simulated parameters did differ — for example, the simulated version included a fuel injection while experimental set-ups included fuel evaporation — the authors write that the differences are not outside the realm of physical possibility.

Through looking at their simulated blue whirls, the researchers were able to identify that the flame was not in fact a single flame, but rather the culmination of three different types of flames:

The nexus of these flames came together to form a fourth structure, a triple-flame, that appeared as the whirling blue flame. This was a result of a vortex breakdown in the system.

They also found that this top-like flame could reach a temperature of over 3,500 degrees Fahrenheit.

Benefits and Unknowns — Being able to accurately simulate this blue whirl phenomenon is an important first step toward understanding how (or even if) this can be scaled commercially, the researchers explain.

Because this flame is capable of burning soot-free, it offers exciting opportunities for scientists to explore the potential for low-emission combustion using fossil fuels. The researchers tell Inverse that the flame could "possibly be used for the oil industry as a method for fuel-spill remediation and for the energy and propulsion industry, which may benefit from a fuel-flexible combustion device with reduced pollution."

They note that the blue whirl is also a new, potential way of "extracting energy from traditional fossil-fuel sources of energy in a clean energy way with minimal environmental impact."

While burning fossil fuel, low-emissions or not, would still be worse for the environment than sustainable options like solar and electricity, a solution like this could offer a way to improve the existing fuel infrastructure while other, greener energy methods are refined.

Abstract: The blue whirl is a small, stable, spinning blue flame that evolved spontaneously in recent laboratory experiments while studying turbulent, sooty fire whirls. It burns a range of different liquid hydrocarbon fuels cleanly with no soot production, presenting a previously unknown potential way for low-emission combustion. Here, we use numerical simulations to present the flame and flow structure of the blue whirl. These simulations show that the blue whirl is composed of three different flames—a diffusion flame and premixed rich and lean flames—all of which meet in a fourth structure, a triple flame that appears as a whirling blue ring. The results also show that the flow structure emerges as the result of vortex breakdown, a fluid instability that occurs in swirling flows. These simulations are a critical step forward in understanding how to use this previously unknown form of clean combustion.

More like this
Innovation
Jan. 16, 2023
In a wild first, physicists used lasers to control lightning on a mountaintop
By Max G. Levy
Innovation
Jan. 16, 2023
An ambitious plan could help repair one of California’s biggest ecological catastrophes
By The Conversation, Robert Glennon and Brent Haddad
Science
Jan. 29, 2023
Does the Doomsday Clock actually mean anything? Experts weigh in
By Jon Kelvey
LEARN SOMETHING NEW EVERY DAY.
Related Tags
Share: