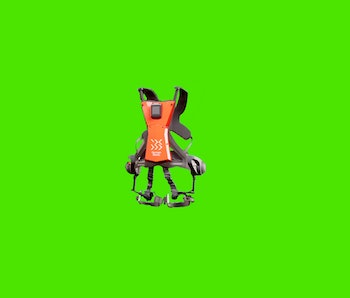 "Automation" is a word that strikes fear into the hearts of workers and conjures images of robotic employees seamlessly taking over factories and assembly lines. But, what if instead of having our jobs replaced by robots, we became the robots ourselves?

This month German bionics has debuted the latest in a line of workplace exoskeletons that can be worn on the backs of workers to support them in lifting an additional 62 pounds (28 kg) without fear of injury. This new suit is the fourth generation of the company's "Cray X" suit. The suit was designed using carbon fiber and is the lightest suit offered by the company yet.

Teetering on the edge of being a dystopian or utopian future, this suit will make it possible for workers to plug directly into their workplace's Internet of Things and don augmented reality and Covid-19 resistant face shields. Armin G. Schmidt, CEO of German Bionic, tells PR Newswire that it will enable companies to increase the productivity of their workers -- assumedly all for the same weekly wage.

"Particularly system-relevant industries, such as logistics and freight, which have been under enormous pressure since the beginning of the pandemic, can now strengthen their employees' backs with our new devices," says Schmidt.

Somewhere between the appearance of a serious hiking backpack and a sky diving suit, this exoskeleton is worn on workers' backs like a backpack and strapped in front with a harness. Extra supports extend over the wearers' hips to provide additional mechanical support.

This exoskeleton suit works by using motors to support and offset up to 62 pounds (28 kg) of weight lifted by a worker. If a worker were to lift thirty items per hour -- roughly one item every two minutes -- at a weight of 62 pounds each, the exoskeleton would offset 100 percent of that weight. Over the course of an eight-hour workday, German Bionics estimates that this would be equivalent to lifting four cars (or six tons.) This 8-hour period is also equivalent to a single charge of the suit.

According to German Bionics, this exoskeleton weighs in at about sixteen-pounds, or about the weight of your over-stuffed college backpack.

In addition to simply improving workers' health by reducing the number of musculoskeletal injuries due to lifting injuries, German Bionics also claims that it could reduce nearly a quarter of related workers' sick-leave as well, keeping workers more continuously productive.

These suits can also be accessorized with German Bionics' smart, augmented reality visor. In addition to helping keep workers safe from airborne containments -- like Covid-19 respiratory droplets --, these displays are also designed to provide heads-up instructions to workers directly in their line of sight, increasing productivity.

When it comes to pricing these suits, German Bionics has a flexible "Robotics-as-a-Service" pricing model that is designed to scale for different business needs. The lowest monthly cost for an exoskeleton suit is just over $785 -- for a 24-month contract. This standard price comes bundled with one initial day of on-site training and additional one-day training once every six-months.

Update: This article has been updated to reflect new information from German Bionics on the weight of the carbon fiber exoskeleton.