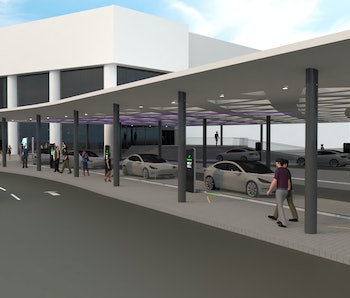 The Boring Company has completed digging for its first public tunnel.

Elon Musk's tunnel-digging firm, borne out of frustration with Los Angeles traffic at the end of 2016, has completed the second of two tunnels for a project in Las Vegas, Electrek reports. The tunnels, which will support the redevelopment of the Las Vegas Convention Center, are designed to transport 4,400 attendees per hour over a distance of nearly a mile.

The tunnel is set to be ready by January 2021, in time for that year's annual Consumer Electronics Show. A spokesperson for the Las Vegas Convention and Visitors Authority, the group that manages the center, tells Inverse that the team has already started excavating for the three passenger stations, and the next step will be to start paving the first tunnel.

“This milestone not only helps usher in the future of transportation in Las Vegas, but it signals the destination’s ability to push through during trying times and continue to meet the evolving needs of our visitors,” Steve Hill, LVCVA CEO and president, said in a statement. “Las Vegas continues to break through boundaries, and we look forward to offering this first-of-its-kind transportation solution to our convention attendees.”

It's a major milestone for Musk's company. The Boring Company was first publicly outlined at the start of 2017 as a means of reducing tunnel-digging costs by improving the boring machines. Musk explained that tunnels were a means of adding more capacity to a city, without resorting to flying cars that would fall to the ground without energy.

The Boring Company took a big step forward when it unveiled its 1.14-mile test tunnel in Hawthorne, California in December 2018. In March 2019, the authority chose the new firm to build a transport system for its convention center. In February 2020, the authority announced the firm had completed digging for the first of two tunnels.

The system is expected to send attendees across the campus in just over one minute, free of charge, with three passenger stations. It will use all-electric Tesla vehicles to transport attendees.

While earlier concepts for The Boring Company demonstrated passenger pods that could transport up to 16 people, the December 2018 event demonstrated a tweaked plan. Instead, the firm would offer access to autonomous and electric vehicles, using guide wheels attached to the car to keep it moving at speed. The goal is to enable cars to move through the tunnels at speeds of up to 150 mph and support up to 4,000 vehicles per hour.

The Las Vegas project has divided people in the city. Richard N. Velotta, the assistant business editor for the Las Vegas Review Journal, told Inverse in February 2020 that "those who are opposed are extremely opposed," while "those who support are extremely supportive," adding that there is "no middle-of-the-road here."

The Boring Company has been linked to projects in other cities. A planned airport link in Chicago, announced in June 2018, seemingly became less likely after mayor Rahm Emanuel left office in May 2019. Other cities have been notably cool toward the firm, with one official in Virginia describing it as a "car in a very small tunnel."

The Inverse analysis – If anything is going to help convince officials about the viability of The Boring Company's proposals, it's a finished project, and the first project's location could give it a big injection of publicity.

The project is likely to receive a slew of press attention when technology journalists visit the center for the Consumer Electronics Show. The show has given media attention to projects like Yandex's autonomous taxi service, as attendees sample new forms of transportation during their time at the show. Perhaps the biggest limiter could be the coronavirus pandemic – it's entirely possible the outbreak causes the show to radically rethink its plans, or even cancel the whole event.

More like this
Innovation
7.30.2022 10:00 AM
Railways around the world are literally melting — here’s why they can’t take the heat
By Kangkang Tang and The Conversation
Innovation
14 hours ago
Will Miami exist in 2050? 4 strategies could keep U.S. coastal cities afloat
By James Gaines
Innovation
8.8.2022 10:00 AM
A wild new plane-train hybrid could whoosh you to your destination — if it can get off the ground
By Molly Glick
Related Tags
Share: