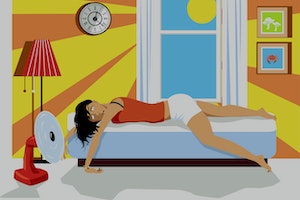 Constantly wiping sweat from our brows isn't anyone's idea of a summer highlight. But the warm-weather annoyance and exercise byproduct could offer a goldmine of data about your body. A new device designed by North Carolina State University (NCSU) engineers has the potential to transform this sun-induced saline solution into a powerful diagnostic tool for everything from dehydration to cystic fibrosis.

Using a low-powered, paper-based design, a team of engineers has created a wearable device designed to continuously analyze the biological make-up of a person's sweat for 10-days at a time. While similar devices stop working after becoming too saturated with sweat, the plant-like capillary action of this device wicks excessive moisture from it and allows it to operate continuously.

Because this method also leaves behind tree-ring-like salt deposits on the device, the authors say it can be used to determine the health history of a user as well.

Far more than just a sticky nuisance, human sweat contains important biochemical information about invisible health processes taking place inside the body, such as evidence of cystic fibrosis in young children, a genetic lung disease that affects 30,000 people worldwide. Chemicals in your sweat can also reveal to doctors if you're dehydrated, intoxicated, or have taken too much of a medication.

Previous methods for conducting these and other sweat-based analyses have been either too expensive or too inefficient for continuous monitoring.

Sweat offers a goldmine of data. Finding it could get a whole lot cheaper.

In a new study published Tuesday in the journal Biomicrofluidics, a team of biomolecular engineers describes how their paper-based design differs from previous, more expensive models.

"The monitoring of human health and well-being with the use of wearables is considered critical in the next generation of biomedical devices," write the authors. "[But] most existing paper-based devices are designed for one-time use only, functioning under relatively intense capillary flow into the paper, which ceases upon saturation... [Our approach] can function as a key part of a platform for long-term sweat sampling and biomarker monitoring."

If you've ever accidentally spilled an entire glass of liquid across a table, then you'll likely know the absorbent action of paper products (like the paper towels you probably used to control the mess.) This instant absorption of liquid by the paper towel is similar to how plants draw liquid from the soil through their stems and is the same approach the team used to wick away moisture from their paper-based device.

This meant the device could quickly evaporate excess moisture from the sweat while densely packing the remaining salt crystals for further analysis. When testing this device on a non-human sweat model, the researchers found that it was able to continuously operate for 10-days or more without becoming oversaturated by sweat.

Orlin Velev, a lead researcher on the study and professor of chemical and biomolecular engineering at NCSU, tells Inverse that this model sweat, like many natural fluids in the human body, was made to be incredibly salty and contain trace metabolites like lactate and cortisol that can be indicators of different health conditions such as dehydration or hypertension.

"You can recover a long-term record of what has been present in the sweat."

In a statement, Velev said the team was surprised by how well this simple model worked in practice.

"We expected that the flow of the model sweat will be suppressed by the deposition of a salt layer inside the drying pad," Velev said. "By following the flow of model sweat, we found, quite surprisingly, that such a simple paper construct can achieve continuous sweat pumping and disposal for very long periods."

The team also found that these densely packed, tree-ring-like, piles of salt leftover from the evaporated sweat could be used to timestamp different biomarkers from the users' body. This could preserve the biomarkers for future analysis, the authors explain.

"Everything the device would collect is deposited on the evaporation pad and embedded in the salt layer," Velev tells Inverse. "[You can] recover a long-term record of what has been present in the sweat."

This can be particularly useful in scenarios such as drug monitoring, says Velev, where a doctor may need to know how a person is metabolizing their medication and what concentration they've taken over time.

Going forward, Velev says the research hopes to soon continue the human trials it began before Covid-19 to explore how this device operates when faced with different types of sweat flow. Velev tells Inverse that the model represented "non-active" sweating, or the amount of sweat collected at rest, but future human trials would evaluate sweat before, during, and after exercise. Velev tells Inverse the team is also looking to collaborate with colleagues in other departments to incorporate electronic sensors into the device.

"We're very interested in working with colleagues in interfacing this device with electronic sensing," says Velev. "Our device will be a component of future devices that are kind of the Holy Grail in this area, where you have an electronic wearable that is going to detect your health status long term."

Abstract: We construct and investigate paper-based microfluidic devices, which model long-term fluid harvesting, transport, sensing and analysis in new wearables for sweat analysis. Such devices can continuously wick fluid mimicking sweat and dispose of it on evaporation pads. We characterize and analyze how the action of capillarity and evaporation can cooperatively be used to transport and process sweat mimics containing dissolved salts and model analytes. The results point out that non-invasive osmotic extraction combined with paper microfluidics and evaporative disposal can enable sweat collection and monitoring for durations longer than 10 days. We model the fluid flow in the new capillary-evaporative devices and identify the parameters enabling their long-term operation. We show that the transport rates are sufficiently large to handle natural sweat rates, although we envision that such handling can be interfaced with osmotic harvesting of sweat, a concept that we demonstrated recently. Finally, we illustrate that the salt film deposited at the evaporation pad would eventually lead to cessation of the process, but at the same time will preserve a record of analytes that may be used for long-term biomarker monitoring in sweat. These principles can be implemented in future platforms for wearable skin-interfacing assays or electronic biomarker monitors.