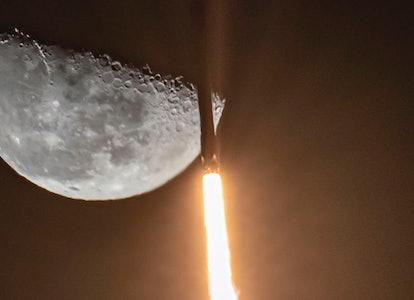 On Thursday, SpaceX set a new record for rocket reuse.

On Thursday at 1:19 a.m. Eastern, the company launched a B1060 core of the Falcon 9 from Space Launch Complex 40 at Cape Canaveral Space Force Station in Florida. The mission, designated "Starlink-18," launched 60 satellites as part of the company's ever-growing internet connectivity constellation.

As noted by NASASpaceflight, the B1060 core previously flew a mere 27 days ago. This new flight marks the fastest turnaround time by a reusable rocket yet, marking a milestone in the quest to bring fully reusable rocketry to space exploration and cut waste.

The 27 days beats the previous record, set on January 20 by the "Starlink-16" mission, which used a booster that flew just 38 days prior. NASA's space shuttle, for comparison, only ever managed a turnaround time of 54 days.

On his Twitter page, SpaceX CEO Elon Musk shared an impressive photo of the Falcon 9 racing through the night sky, with the Moon serving as a superb backdrop:

The feat is part of SpaceX's long-term plan to reduce the costs of spaceflight. In 2013, Musk revealed the first stage booster makes up around three-fourths of the total cost of a rocket flight, so reusing the booster could dramatically reduce costs.

Following Thursday's launch, the rocket successfully landed on the Of Course I Still Love You droneship in the Atlantic Ocean. This marks the 74th successful landing of an orbital class rocket.

Other space photographers also captured the launch in stunning detail.

Stephen Marr, who runs the Instagram account "SpaceCoastSteve," shared this impressive photo of the rocket shooting into the night sky:

Another image, from photographer Michael Cain at the Instagram account "mdcainjr," also shows the rocket whooshing off into the night sky against the Moon:

Thursday's launch was the fifth flight for the booster in a mere eight months:

Beyond rocket reuse, the mission may also now hold the record for the shortest time between rocket launches.

SpaceX is scheduled to launch the "Starlink-17" mission at 5:14 a.m. Eastern on Friday, February 5 from Space Launch Complex 39-A at the Kennedy Space Center in Florida. This would represent a gap between missions of just under 28 hours — albeit from two different launch sites around seven miles apart. "Starlink-17" was originally scheduled for before "Starlink-18," but delays confusingly mean that "Starlink-18" launched earlier.

The feat would beat SpaceX's previous record — set in December 2018 — of just under 48 hours. At 1:34 p.m. Eastern on December 3, 2018 the SSO-A mission launched from Vandenberg Air Force Base in California. On December 5, at 1:16 p.m. Eastern, SpaceX launched the CRS-16 mission from what was then Cape Canaveral Air Force Station.

The Inverse analysis — SpaceX is speeding up its rocket reuse flights, making space more accessible than ever.

It's taken some time to get here. In July 2020, SpaceX looked ready to beat its then record of 62 days turnaround to 45 days. But a problem with the disposable second stage meant SpaceX delayed the flight. When it eventually flew, it set a still-respectable record of 51 days.

Musk, true to form pitched a far more ambitious target — one SpaceX is still to reach. In March 2017, he declared SpaceX's next goal was to relaunch the same rocket within 24 hours of use.