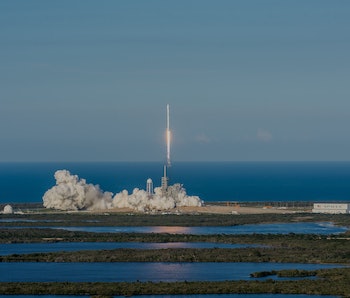 For SpaceX, launching and landing a previously-flown Falcon 9 rocket is far from a one-and-done deal. In fact, if CEO Elon Musk and his team had their way, the company would be firing off the same rocket again into space the very same day, just hours after a successful landing.

Thursday evening’s SES-10 mission was a milestone achievement in SpaceX’s overall goal to establish a transportation system to make extraterrestrial colonies sustainable. To do so, spaceflight has to be cheaper. And to make spaceflight cheaper, you have to make the launch and flight architecture reusable.

Immediately after SpaceX stuck the landing, Musk was ebullient about what had just occurred. “The first re-flight of an orbital class booster did its mission perfectly,” he said. “It means you can fly and re-fly an orbit class booster which is the most expensive part of the rocket. This is going to be an enormous revolution in spaceflight.”

Just a little while later on Twitter, Musk emphasized the company was extraordinarily happy, but far from done.

See, Musk doesn’t simply want to make spaceflight cheaper and more accessible. He wants to turn space travel into a transportation system that works as fast and efficiently as other modes of transportation, like interstate rail or commercial flight. These kinds of vehicles are able to continuously operate with barely having to take a beat to rest.

“We’re really looking for true operational reusability, like an aircraft,” said Gwynne Shotwell, president of SpaceX, during the launch’s webcast. “An aircraft lands, goes to the gate, passengers come off, passengers go on, you refuel, and then you fly again. What we’re looking to do is exactly that. We land and relaunch on the same day.”

SpaceX wants to see this kind of rapid reusability happen not just for the Falcon 9, but for all of its rocket architecture. The company’s plan for setting up a speedy interplanetary highway from Earth to Mars (and back), the Interplanetary Transit System (ITS), was unveiled last fall by Musk. The system will utilize a two-part reusable launch vehicle (formerly known colloquially as the Big Fucking Rocket, or BFF).

Essentially, both parts will take off, and the first-stage booster will deliver the second part — the crewed vehicle — to an orbital refueling station which will prepare it for the rest of the journey to Mars. The first stage booster should return to the ground just a few minutes after launch and be ready for another flight in a matter of hours or less.

In order to get to that point, SpaceX needs to basically conduct as many launches as possible, in order to test out new rocket architectures and troubleshoot even the most minute flaws that arise from flying the same rockets again and again. That’s exactly why SpaceX is hoping to sink into a launch schedule later this year in which it’s doing missions every two to three weeks. On that kind of schedule, we could start seeing between 18 and 28 launches per year.

Let’s hope there aren’t any more explosions that impede that goal.