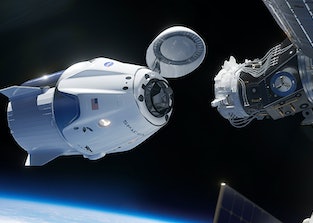 people going up, up, and away

SpaceX is set to send three private citizens on a flight to the International Space Station.

The mission, announced last week, will be hosted by Axiom Space, which has an ultimate end goal of building the world's first commercial space station. The first mission will send three people to the station in the second half of 2021, offering at least eight days of microgravity on board the station. While there, they will be able to witness some of the most impressive views of the Earth experienced by a very rare few.

The visit will be conducted using SpaceX's Crew Dragon. The capsule, currently in development, forms part of NASA's Commercial Crew program with private industry to ferry humans to and from space. It will also eliminate reliance on sending NASA crew all the way to Kazakhstan to fly from Roscosmos' Baikonur Cosmodrome. (Even though Christina Koch looked very happy to be back on Earth, NASA would likely prefer her to land in the U.S.)

The first crewed flight with Crew Dragon, "Demo-2," is expected later this year.

Axiom Space, founded in 2016, has big plans for its commercial mission. It's expected to act as a "precursor mission" to the station, and it's currently discussing with NASA plans to create new agreements for its space station missions.

The end goal is to eventually build out the Axiom's own section of the ISS, which will be built out into the world's first commercial space station.

SpaceNews reports that Axiom agreed in January with NASA to attach a docking port and observatory to the space station in late 2024.

Axiom will attach a habitation model in 2025, then a research module in 2026, in preparation for detaching from the ISS itself and forming its own station when the ISS is retired sometime in the late 2020s.

“This history-making flight will represent a watershed moment in the march toward universal and routine access to space,” Axiom CEO Michael Suffredini, program manager for the ISS from 2005 to 2015, said in a statement. “This will be just the first of many missions to ISS to be completely crewed and managed by Axiom Space – a first for a commercial entity. Procuring the transportation marks significant progress toward that goal, and we’re glad to be working with SpaceX in this effort.”

“This will be just the first of many missions to ISS"

Axiom Space is not the first company to suggest Crew Dragon flights for private citizens. SpaceX announced on February 2017 plans to send two private citizens around the moon using the capsule. In September 2018, CEO Elon Musk announced the client was Japanese billionaire Yusaku Maezawa, the trip would take place in 2023, and it would use the under-development Starship instead to transport six to eight artists.

Last month, Space Adventures announced it planned to send up to four private citizens into space with the capsule. The mission was billed as potentially the first to use all-American spaceflight technology, using a Falcon 9 reusable rocket to send up the capsule from the Cape Canaveral Air Force Station in Florida. That mission would involve a launch window stretching from late 2021 to early 2022, after a few weeks of training in the United States. The mission would last for five days, flying far enough to break the world altitude record for commercial spaceflight.

Space is getting commercialized.

SpaceX and Blue Origin have spoken before about their aims to support new businesses with cheaper space launches and new infrastructure. Blue Origin's Jeff Bezos has likened these future firms to Amazon, which were able to succeed thanks to early pioneers' work.

Axiom Space is something of a newcomer to the area. Space Adventures, on the other hand, has already flown over 36 million miles for private citizens over eight missions from 2001 to 2009. Axiom has impressive talent in its leadership, like four-time astronaut Michael López-Alegría and former NASA administrator Charlie Bolden.

There's no denying, though, that this first mission will be a key test for plans to expand space into a more commercialized arena.