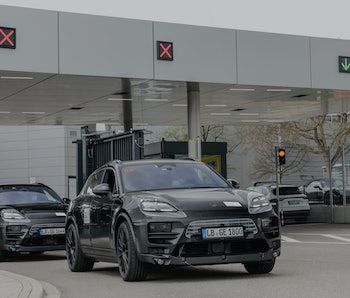 Porsche’s first electric vehicle was the Taycan, an impressive luxury electric sedan that was the first real challenge to Tesla’s EV dominance.

But Porsche knows as well as any automaker that the road to profitability is paved with SUVs — it was arguably the first luxury car brand to embrace the SUV movement with the Cayenne back in 2003. The Porsche SUV has been a cash cow of elephantine proportions, so it’s only natural that the fertile world of crossovers would soon be seeded with an electric Porsche.

Expect the Porsche Macan EV to be wildly successful, just like every other Porsche SUV — and expect Porsche purists to continue to complain about the company building anything that isn’t a 911. The current Macan is the best-selling Porsche, which gives it the best business case for electrification.

In the meantime, here’s everything you need to know about the 2023 Porsche Macan EV, from release date, price, and specs to range and charging time.

This story is developing and this report will be updated as more information becomes available...

What is the Porsche Macan EV release date?

The 2023 Porsche Macan EV will be based on the next-generation Macan which should be revealed later this year. Expect the Macan EV to debut sometime in late 2022.

What’s the price of the Porsche Macan EV?

The regular Macan starts at around $56,000 and runs up towards $100,000, so we would expect the Macan EV to start in the same general neighborhood.

Porsche hasn’t shared specific numbers but says the electric Macan will have a longer range than the performance-focused Taycan, which maxes out at 227 miles in the EPA test cycle — though many Taycan owners have done much better on range.

As the Porsche Macan is more a family vehicle than a performance machine (though it will certainly have performance chops), it seems likely that a close-to-300 mile range is probably likely.

What is the Porsche Macan EV charging time?

The Macan EV will use the same 800-volt architecture as the Taycan, which allows for faster charges. Porsche says a Taycan can charge at up to 270 kW, and charging from 5 to 80 percent should take under 23 minutes. At low battery charge levels, you can add more than 60 miles of range in five minutes.

Expect similar — or even better — performance from the Macan, as Porsche will have several more years of EV development under its belt.

What are the Porsche Macan EV’s horsepower and torque?

Porsche hasn’t said, but again we can look to the Taycan for some idea when it comes to specs.

There will likely be a number of different versions of the Macan EV, but a similar number of trim levels (and similar performance) is to be expected.

Porsche hasn’t shared these numbers either, but expect it to be a bit of a rocket ship. The Taycan, which is a fairly large sedan, runs from 0-60 MPH in 2.4 seconds according to Car and Driver.

The magazine also noted that the Taycan could make that run repeatedly without any degradation in performance, which it said the Model S could not manage.

Is the Porsche Macan EV self-driving?

Likely not. The Taycan includes an extensive list of safety features including adaptive cruise with stop-start, blind-spot monitoring, and available night vision.

Given Porsche’s focus on performance, racing, and driver enjoyment, it seems unlikely that they will offer a fully self-driving car any time soon.

How can I pre-order the Porsche Macan EV?

Porsche has not shared any pre-order information, but contact your local Porsche dealer to see if you can place a reservation.