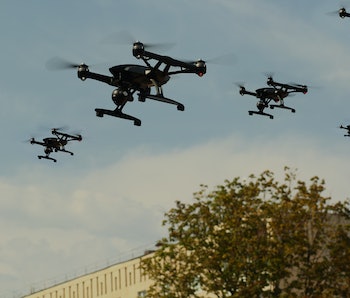 There are plenty of fun things you do with drones, such as racing them or taking videos of yourself doing various activities, but drones are just as easily turned into weapons. Excluding the military, even off-the-shelf commercial drones can be used to spy on people or during terrorist attacks. New research into drone detection technology could help us prevent those things from happening.

A new study published in the journal IEEE on Wednesday looks at how we can effectively use radar technology to monitor the presence of drones. Researchers from Aalto University in Finland, UCLouvain in Belgium and New York University collected radar measurement data to analyze how drone detection technology could be improved. The researchers were specifically looking at different drones' Radar Cross Section (RCS), which measures how different drones reflect radio waves.

D. Sc. Vasilii Semkin, a research scientist and one of the authors of the study, said in a statement that they wanted to look at the differences between the different drone models.

"We measured drones' RCS at multiple 26-40 GHz millimetre-wave frequencies to better understand how drones can be detected, and to investigate the difference between drone models and materials in terms of scattering radio signals," Semkin said. "We believe that our results will be a starting point for a future uniform drone database. Therefore, all results are publicly available along with our research paper."

As Semkin said, the researchers hope their measurements can be used to create a database that could be used to help engineers improve drone detection technology. Semkin said there is an "urgent need" to improve how we monitor drone use, as it will help us prevent drones from being used for nefarious purposes.

It's pretty obvious how drones could be used to spy on people. With enough piloting skills, someone could fly one into your back yard and peer through your windows. While that's concerning enough, the idea of people weaponizing drones is even more alarming. A drone could be retrofitted to be able to fire a gun (it happened in Connecticut in 2015) or someone could strap a bomb to a drone and fly it into a crowd. Keep in mind that some drones can fly miles from their operator.

During a time like this, with the country reeling over the coronavirus outbreak, a terrorist attack could cause chaos. People are already feeling fearful, and hospitals are already struggling to keep up with demand. Drone detection technology could prevent that kind of catastrophe.

Ryan Calo, an associate professor of law at the University of Washington and a drone technology expert, tells Inverse that he isn't too worried about drones being used for domestic terrorism.

"There are reports of drone technology being used by non-state adversaries in the theater of war, but I don't see weaponized drones as especially dangerous sources of domestic terrorism, particularly in the United States where firearms are ubiquitous anyway," Calo says.

In terms of privacy violations, Calo says there are many legal routes for dealing with individuals or the police using drones to spy on people, and he says he's most worried about how these drones could utilize multiple different types of surveillance technologies to really invade people's privacy.

"If neighbors snoop on one another, then tort actions such as trespass or intrusion upon seclusion might be available. If the government uses drones to follow individuals around continuously, then recent Supreme Court precedent suggests a warrant could be necessary. Some states have also passed laws limiting drone use by police," Calo says. "My main concerns have to do with combining drones with thermal imaging, chemical detection, or facial recognition and then deploying them in an indiscriminate manner to monitor the public."

Police departments around the country already have thermal imaging devices that can help them see if someone is on the other side of a wall, and many people are concerned about police departments using facial recognition to track people in public, so Calo's concerns are certainly not unfounded. Perhaps we'll soon be able to accurately detect when a police drone is trying to snoop on us.

Though drones may not become a popular tool for domestic terrorism, it seems highly likely they will be used for terrorism at some point in the not-too-distant future. Someone who wants to kill civilians or maybe even target a politician could strap a bomb to a drone and send it to a destination far from their location, and it could be very difficult for police to find out where it came from. If we want to avoid a situation like that, we better start preparing for it.

Abstract: In this work, we present quasi-monostatic Radar Cross Section measurements of different Unmanned Aerial Vehicles at 26-40 GHz. We study the Radar Cross Section signatures of nine different multi-rotor platforms as well as a single Lithium-ion Polymer battery. These results are useful in the design and testing of radar systems which employ millimeter-wave frequencies for superior drone detection. The data shows how radio waves are scattered by drones of various sizes and what impact the primary construction material has on the received Radar Cross Section signatures. Matching our intuition, the measurements confirm that larger drones made of carbon fiber are easier to detect, whereas drones made from plastic and styrofoam materials are less visible to the radar systems. The measurement results are published as an open database, creating an invaluable reference for engineers working on drone detection.

More like this
Innovation
7.1.2022 10:00 AM
Robots are ready to get touchy-feely
By Sarah Wells
Innovation
6.21.2022 11:00 AM
No, Google’s Deepmind isn’t on the verge of human-like reasoning
By Tristan Greene and Undark
Innovation
6.25.2022 10:00 AM
9 veggies that are healthier cooked than raw
By Laura Brown and The Conversation
Related Tags
Share: