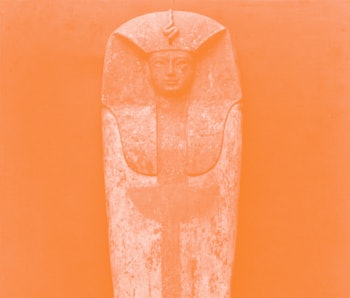 Thanks to modern medical technology, a grizzly ancient Egyptian cold case has been cracked open.

For the first time since 1960, a team of researchers from Cairo University revisited the mummy of Pharoah Seqenenre-Taa-II the Brave to better understand what his final hours might have looked like and how his death would act as a catalyst for the unification of Egypt.

Unlike previous research, which suggested Seqenenre (also known as Seqenere Tao) may have been killed in his sleep or aboard a chariot, the study's authors argue that new discoveries made of his injuries suggest a much more noble and heroic end — fighting among his army's frontlines against invading forces.

Why it matters — These new discoveries demonstrate the role advanced technology can play in unraveling ancient mysteries. In this instance, technology informs a pivotal moment in the history of ancient Egypt.

The research was published Wednesday in the journal Frontiers of Medicine.

Here's the background — It all started between the late 16th and early 17th century when an enemy king complained about a noisy hippopotamus that Seqenenre kept in his personal Theban swimming pool.

The Hyksos king, who ruled Northern Egypt with a group of Asian shepherds, demanded that Seqenenre — who ruled Egypt's southern half — destroy the offending pool immediately.

Instead of sacrifice his pool, Seqenenere went to battle against the Hyksos. A battle he wouldn't survive.

While there are some records of what happened during this historical battle, which would ultimately spark a unification of Egypt, there's little in the written record to say exactly what befell Seqenenre.

But it wasn't until this new study that researchers were able to take a closer look using computation tomography or CT (a type of super-quick, 360-degree X-ray) to tell previously unknowable parts of Seqenenre's story.

What they did — To learn more about Seqenenre's final hours, the team loaded the mummy — sarcophagus and all — into the kind of CT scanner you might go through to look at a bone fracture.

The researchers also carefully removed the fragile mummy and sent it through alone as well for closer analysis.

What they discovered — Similar to reports from the 1960s, the researchers identified many different fractures and wounds to Seqenenre's face and head, including injuries to the eye, cheek, and skull. However, they also identified previously missed injuries embalmers apparently cosmetically disguised when mummifying the king.

While previous studies had suggested that Seqenenre's patterns of wounds were evidence that he was murdered in bed or aboard a chariot, the researchers behind this study say the wounds paint a different picture.

For one, instead of a single attacker, they write that the shape and impact of the wound suggest Seqenenre was attacked by different assailants (and from different sides) wielding a variety of Hyksos weapons. This rules out a simple bed-side attack, the authors write.

Instead, they imagine Seqenenre's final hours were a little more active.

"This [research] suggests that Seqenenre was really on the front line with his soldiers risking his life to liberate Egypt," Sahar Saleem, a professor of radiology at Cairo University and the study's first author, said.

The study team suggests Seqenenre was likely captured during the battle, bound, and ceremoniously attacked by the opposing forces. They also speculate his body was carried back to Thebes for proper mummification. At the time of his death, Seqenenre would have barely been forty.

What's next — There' still much that scientists may never know about the death of Seqenenre the Brave, but the new findings made using CT are another step toward solving this mystery and in turn better understanding this pivotal moment in Egyptian history.

In the future, similar non-invasive CT scans can be used to tell the stories of everyday Egyptians as well — even those who didn't own a hippo.

Abstract: Seqenenre-Taa-II, The Brave, (c.1558- 1553 BC) ruled Southern Egypt during the occupation of Egypt by the Hyksos. The mummy was physically examined and X-rayed in the 1960s, which showed severe head wounds that have prompted various theories about the circumstances of his death. We postulated that Computed Tomography (CT) study of Seqenenre-Taa-II’s mummy would give insights into the circumstances of his death. We examined Seqenenre’s mummy using CT and compared the findings with the archaeological literature as well as with five Asian weapons found in Tell-el-Dabaa. CT findings indicate that Seqenenre died in his forties. The mummies deformed hands suggest that the King was likely imprisoned with his hands tied. CT images provided detailed analysis of Seqenenre’s previously reported injuries to the forehead, right supra-orbital, nose-right orbit, left chick, and skull base. This study revealed additional craniofacial fractures in the right lateral side of the skull that had been concealed by the embalmers beneath layers of material. Analysis of the morphology of the injuries enabled a better understanding of the mechanism of trauma, possible number of the attackers, and their relative position to the King. The size and shape of the fractures correlated well with the studied Hyksos weapons. The lethal attack was aimed at the King’s face, likely in an attempt to disgrace him. Mummification of Seqenenre’s body was limited to evisceration without brain removal. The desiccated brain is shifted to the left side of the skull. This may indicate that the King’s dead body stayed on its left side for some time -- long enough for decomposition start before the mummification began. This suggests that the King likely died at a location distant from the funeral place, possibly on a battlefield. The embalmers attempted to conceal the King’s injuries; the methods used suggest that the mummification took place in a royal mummification workshop rather than in a poorly equipped location. CT findings of Seqenenre’s mummy helped us to better understand the circumstances of his violent death. His death motivated his successors to continue the fight to unify Egypt and start The New Kingdom.