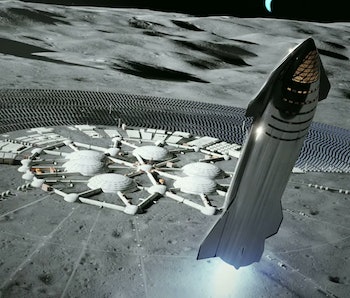 This week, NASA announced a discovery that could make a permanent lunar base reality.

On Monday, agency researchers announced they had detected abundant water on the Moon's surface, trapped in small icy pockets throughout the lunar soil. The signals were detected by NASA's Stratospheric Observatory for Infrared Astronomy, also known as SOFIA. Taken together, the water is equivalent to a 12-ounce bottle per cubic meter of lunar soil, they estimate.

They also found the first evidence that water exists on the sunlit areas of the Moon, not just at the poles.

Essentially, the discovery suggests water may be far more accessible to humans than previously thought, dramatically expanding the areas of the Moon where humans might be able to establish a presence — and whether they can go even further into space.

Private companies like SpaceX and government agencies like NASA, as well as others in China and Europe, have all made clear they plan to establish lunar bases. But if they are to work, they need to make the most of what the local environment has to offer.

Basically, the more resources you can find and use once you are in space, the less you have to send up at launch.

"Water is a precious resource in space," Paul Hertz, NASA's astrophysics division director, said during the agency's press conference. "We want to know everything we can about water on the Moon."

Location, location, location — One of the key impacts of this discovery on these plans is the fact that it broadens where on the Moon humans can set up shop for three key reasons.

First, astronauts would be able to drink the water, albeit after treating it.

Second, water is not just for drinking. Water can be converted into oxygen for astronauts, Jacob Bleacher, chief exploration scientist for the Human Exploration and Operations Mission Directorate at NASA, explained Monday.

Third, it can also be used to create fuel.

Fuel is one of the major challenges for a Moon base, SpaceX CEO Elon Musk claimed in October 2019. The company's Starship is designed to use liquid oxygen and methane, chemicals that astronauts can generate from carbon dioxide and water. SpaceX wants to build a fueling station on Mars that would utilize that planet's stores. Musk noted at the time that the Moon's lack of carbon, hydrogen, and oxygen is a "big challenge" for refueling the Starship on the Moon. This news suggests it could make a perfect pit stop, too.

Back to the Moon, 2024 — NASA chose SpaceX's Starship in April, along with two other pitches, as a potential solution for landing humans on the Moon in 2024. SpaceX has also detailed plans on using Starship rockets to serve as the basis for a "Moon Base Alpha."

"With the Artemis program, NASA will land the first woman and the next man on the Moon in 2024 and establish a sustainable human presence by the end of the decade," Hertz said. "At the Moon, we will prepare for human exploration of Mars."

SpaceX and NASA are not the only two interested. The Chinese and European space agencies have also expressed interest in permanent settlements. Blue Origin's Jeff Bezos also said in a 2018 speech that "we must go back to the Moon, and this time to stay."

But before astronauts start packing their drinking straws, more research needs to be done.

"We know there's water at the moon, but we don't know exactly how accessible lunar water is for our future explorers," Bleacher said. "Knowing where we can find water is a good first step. But we need to know more about the water to understand if and how we can use it for both science and exploration."

Water, water everywhere – but we might have to wait a bit to drink.

More like this
Science
8.12.2022 10:00 AM
45 years ago, the first Space Shuttle made history without going to space
By Allie Hutchison
Innovation
8.13.2022 3:00 PM
Mars City: 3 Red Planet resources could forge a critical building material
By CAROLYN COLLINS PETERSEN and Universe Today
Science
8.5.2022 12:15 PM
10 years ago, the Curiosity rover arrived on Mars — and revolutionized the hunt for alien life
By Allie Hutchison
Related Tags
Share: