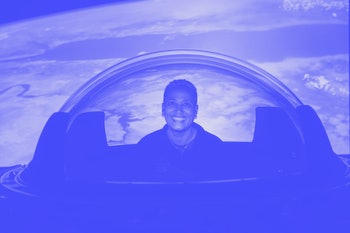 Dr. Sian Proctor has been waiting for this. Thanks to an online store that grabbed the attention of Jared Isaacman, CEO of the site Proctor launched her shop on, the 51-year-old professor will take up one of four seats on the forthcoming all-civilian SpaceX mission, Inspiration4. For Proctor, paceflight was always a fantasy just a touch out of reach. That is, until this March.

It all starts here

There’s a touching moment in the upcoming Netflix documentary Countdown: Inspiration4 Mission to Space, released on Monday, where Sian Proctor finds out she is going to space.

She is asked to join a video call on March 7, 2021, as part of the ongoing vetting process, but is surprised to see Isaacman, who organized the mission, also on the call. He calmly explains that the call is “not really part of the vetting process because you’ve already gotten through that...you’re selected.”

The news takes a moment to sink in, as Proctor gradually raises her hands and begins to shake. Eventually, she says that she “dreamt of this my entire life.”

Proctor is one of the four that will launch on SpaceX’s Inspiration4 mission on September 15, the first all-civilian flight to orbit. Speaking to Inverse just over two weeks before the scheduled launch, Proctor says that her first reaction after leaving the call was “did that really happen?”

Unfortunately, she couldn’t tell anyone straight away. Proctor received the news 23 days before the official news release on March 30.

“I think when I got to share it with my family and friends...that was the first ‘oh, okay, this is happening,’” she says.

Want to know more about Dr. Sian Proctor, what makes Inspiration4 unique, and the dramatic spaceflight changes SpaceX is heading? Read the full interview with professor Sian Proctor and CEO Jared Isaacman, only in MUSK READS+.

Proctor was born in Guam while her father was working at the island’s NASA training station — the documentary shows a handwritten note from astronaut Neil Armstrong thanking her father for his work. She’s worked as a geoscience professor for more than 20 years at South Mountain Community College in Phoenix, Arizona.

Isaacman, Inspiration4’s benefactor, started Shift4 Payments in 1999 when he was 16 years old. The company now has over 1,200 employees. In his spare time, Isaacman also flies jets.

The documentary shows how Isaacman worked with SpaceX to shape the mission. In one scene, the team starts to discuss the prospect of flying higher than the International Space Station. While one team member describes it as “opening Pandora’s Box,” Isaacman delivers a strong argument in favor of “pushing that one step a little bit forward.”

The mission will now fly to an altitude of 540 kilometers (335 miles). That’s higher than the 254-mile altitude of the ISS, and the furthest any humans have ventured into space since the 2009 mission to the Hubble Space Telescope at 340 miles.

When asked by Inverse how he feels about that decision now, Isaacman says that “I wish we could have pushed them even farther.”