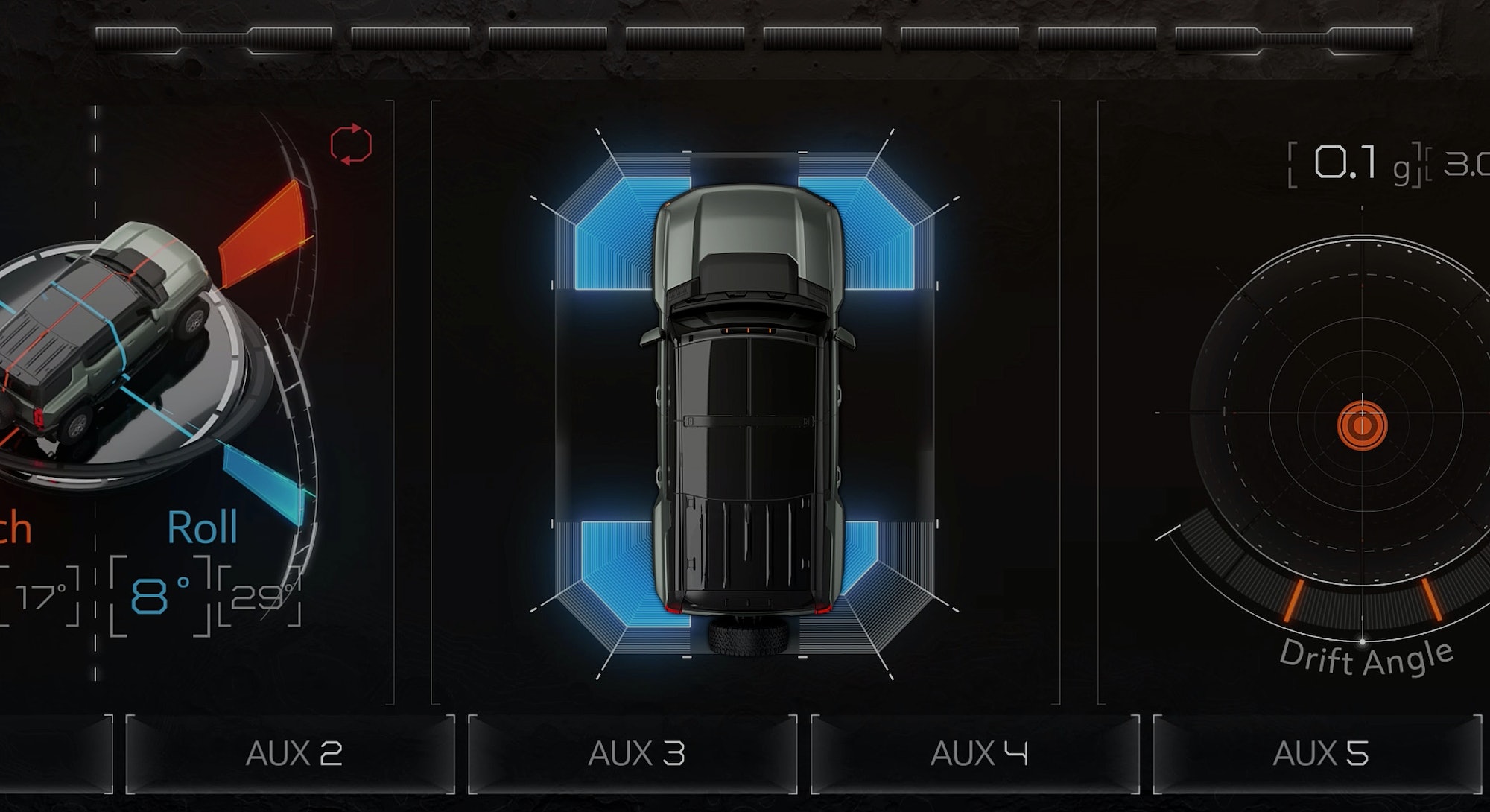 There are lots of snazzy features on the new GMC Hummer EV that make it the most exciting electric supertruck on the horizon.

There’s CrabWalk mode, with rear-wheel steering enabling the truck to scuttle diagonally across a rock-strewn landscape. Or Extract Mode, which uses the adjustable air-suspension system to raise the vehicle’s already-prodigious ride height an additional six inches to roll over large obstacles. And don’t forget the Elon-esque Watts to Freedom 0-to-60 MPH speed run setting, an obvious backronym for “WTF”.

But the thing Hummer buyers will use most often isn’t any of those: it’s the two giant screens in the cabin giving access to the vehicle’s various driving systems, the infotainment and climate controls, and the instrument cluster. And the futuristic user interface on the big screens might be the coolest part of the whole Hummer experience.

It also literally takes a page out of the Marvel Cinematic Universe (MCU).

How did Marvel influence the new Hummer EV SUV design?

Perception is a New York-based design house that’s most famous for designing the computer user interfaces for much of the MCU.

They’re behind the look of Peter Parker’s Stark Tech in Spider-Man: Far From Home, the ship UI in Thor: Ragnarok, and the futuristic tech of Wakanda in Black Panther including the Vibranium Sand, the Wakandan font, and Shuri’s medbay.

But while you might not know it because they’re often sworn to secrecy, Perception has also worked with some of the biggest tech firms in the world on a wide variety of project types. They’ve developed concept interfaces for aeronautic applications and advanced data visualization techniques, but they also work on more grounded projects — including the user interface of the new GMC Hummer EV.

How did the Hummer EV SUV design come together?

John LePore has been the principal creative director at Perception since 2010. “Our strength is not that we work on next-gen products or emerging technologies,” he tells Inverse. “Our strength is not designing future tech for feature films. We do both of these things and one informs the other. Science fiction informs science fact, but it goes the other way too.”

When designing the systems in the MCU, LePore says his team always strives to find something that is grounded in reality. “They can be fully blue sky, but there is always some connection and a tether to these ideas driven by logic or a plausible pathway to being realistic. Otherwise, you’re just making blue shit floating in the air everywhere.”

He goes on to explain that the Vibranium sand in Black Panther uses ultrasonic soundwaves to levitate and create a 3D interactive display. “This can be done today with beads of styrofoam,” he says.

“When you look closely at Black Panther, when the tactical table comes to life, there’s this rhythmic bounce that it makes,” LePore adds. “There are sound waves there! Is there anyone in the audience that discerns that directly? Maybe not. But do they get that there’s a deeper logic that’s driving it? I think so.”

How the MCU made its way to GMC

When it comes to Hummer, GMC went to Perception because it wanted something futuristic but still grounded in reality. Scott Martin is the creative director at GMC-parent company General Motors and LePore’s counterpart on the project.

Hummer EV is an entirely new vehicle for GMC. It’s a new platform, with new batteries, and a unique attitude. When it came to designing Hummer, GMC was willing to go outside the box with suppliers and that’s how Perception was brought in.

“A lot of companies can make phenomenal graphics in movies,” Martin says. “But Johnny and his team at Perception don’t just do movie work. They do pragmatic product work as well. The way they pitched us, they were balanced and grounded. It wasn’t just cool for the sake of cool.”

LePore agrees, noting that in a production vehicle, you can’t just focus on making things pretty. “You have to make sure that this information is as legible to the driver as possible,” he says. “We always say that every pixel has a purpose and every decision that we make has to convey more information to the driver while they’re using the vehicle.”

With that as their North Star, Perception and GMC ended up with instrumentation that could be straight out of Iron Man, but is still functional and easy to understand. It’s minimalist, without the faux gauge clusters that plague some digital dash user interfaces, but also tactical, befitting the reputation of the Hummer. LePore says that it’s designed to remind the driver that the Hummer EV is sophisticated, but also a serious tool.

How does the new Hummer EV SUV infotainment system work?

The infotainment system runs on top of GM’s existing Info3 platform, but it has some new tricks. Epic’s Unreal engine powers much of the vehicle animations, allowing for functional replicas of the Hummer EV to be shown on screen. This isn’t just for looks.

A lot of car buyers aren’t comfortable adjusting things like off-road drive modes because they don’t know what the different settings do. So Perception built a visualization showing the Hummer EV driving over different types of surfaces depending on which mode you’re in.

Spin the dial to Terrain and you’ll see a Hummer tackling rock-formations that are out of this world. Change to Touring and the on-screen Hummer suddenly bursts through a digital wall and is driving on smooth tarmac. And it really is out of this world — the lunar surface plays a big role in the Hummer EV’s on-screen story, inspired by the GM-built lunar rover brought to the moon by the Apollo program.

The Hummer’s on-screen startup sequence includes a lunar landscape with the Hummer logo etched in it and shadows moving across the screen as the unseen sun traverses space. The truck drives across the virtual lunar surface in the drive mode screens, and there’s even an entire lunar-inspired interior theme including a map of the Sea of Tranquility etched onto the truck’s speaker grilles.

“We made a mock-up of a Hummer sitting on a hemispherical platform that could rock in all directions to show you the vehicle’s attitude,” LePore says. “We have a direct readout for pitch and roll, but you'd also get this crystal clear visualization with the front left corner dipping and the rear right corner lifting up.”

“We had discussions about a lo-fi way to create this if there were hardware limitations,” he says. “But this is exactly what the Unreal engine is made for. It ended up being almost exactly what the initial dream of the visualization could be.”

They’re really just scratching the surface of what’s possible with something like the Unreal engine, which has powered video games for decades. “We’re starting small,” says Martin. “But we can iterate much faster internally. Looking at the future, there’s a lot of potential that this tool can enable.”

Modern vehicles are more complicated than ever, and people are even less willing to crack open a printed owner’s manual when they’re so used to having an iPhone or iPad in their hands.

“Wouldn’t it be great if we could illustrate features using the vehicle instead of giving paragraphs of information?” Martin asks. He points to driver assistance features like GM’s Super Cruise, the hands-off Level 2 semi-autonomous driving system that’s standard on the Hummer EV. “I really think we’re just scratching the surface by using the vehicle as the jewel piece. The whole interface can be within Unreal, but we started small to get our feet wet.”

People have grown accustomed to their phones and to see things updating all the time, he says. “We’re on the cusp of completely changing that.”

When I ask which superhero would drive the Hummer EV, both Martin and LePore laugh but have quick answers. “It’s almost too cliché to just say Iron Man, right?” responds Martin. “But I think at Tony Stark’s cabin there might definitely be a Hummer EV parked outside.”

“If [Halo’s] Master Chief drove something in civilian life, I like to think it would be the Hummer EV,” says LePore with a laugh. “I can’t wait to see what movies we’re working on when everyone is chasing bad guys around in Hummers.”

The GMC Hummer EV pickup and SUV can be reserved now on GMC’s website. The pickup should begin deliveries late this year, while the SUV will begin hitting dealerships in early 2023.

By the way, if you liked this article, you’ll love my weekly car review newsletter PRNDL. Click here to subscribe for free on Substack. I’ll even answer your new car questions!